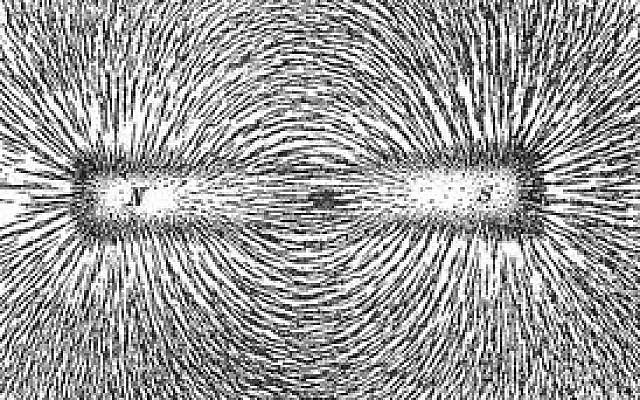 Scattered magnetic filings around a magnet align themselves along the force lines of magnetic field.

And let them make me a Sanctuary that I may dwell among them (Ex. 25:8)

In modern physics, there are two paradigms usually expressed as locality and nonlocality. Theoretical physics was born when Isaac Newton published his Philosophiæ Naturalis Principia Mathematica in 1687, where he formulated his laws of motion and the universal law of gravity. The law of gravity says that two masses attract each other proportionally to the product of their masses and inversely proportionally to the square of the distance between them. This law said nothing about the nature of the gravitational interaction, it did not explain the mechanism of this attraction at a distance. Newton was bothered by the question of how one body can act on another body far removed from it with nothing in between, i.e., the notion of “action at a distance.” In 1692, in his letter to Bentley, Newton wrote: “That one body may act upon another at a distance through a vacuum without the mediation of anything else, by and through which their action and force may be conveyed from one another, is to me so great an absurdity that, I believe, no man who has in philosophic matters a competent faculty of thinking could ever fall into it.” Absurd as it may be, the nonlocal paradigm in physics remained the status quo for a long time.

It was only in 1849 that Michael Faraday coined the term “field” (in the context of the electromagnetic field), which meant that the interaction between two particles propagates locally from one point to the next thereby eliminating the “action at distance” that so bothered Newton. This idea was demonstrated by Faraday when he placed a magnet next to iron dust, which formed characteristic force lines. Later, James Clerk Maxwell formulated the equation of the electromagnetic field and the modern field theory was born. Due to this paradigm shift, the action at a distance has been eliminated and physics became local.

When God gave us Torah at Mount Sinai, His presence—Shechinah—filled the whole Earth. God’s presence, therefore, was meant to be global (nonlocal). Alas, this idyllic state of affairs did not last very long. After the sin of the Golden Calf, God’ presence—Shechinah—left the world again. Then God commanded Moses to build him a Sanctuary (Mishkan) where Shechinah would dwell locally. A paradigm shift from global to local occurred due to the sin of the Golden Calf. But let us look at the verse carefully.

God tells Moses to construct the Mishkan (Tabernacle, or Sanctuary) so that God may dwell among people! God’s presence is not limited to the Mishkan—Tabernacle—or even to the Bet HaMikdash—the Jerusalem Temple. As this verse teaches us, God primarily dwells among his people. As we see, God’s presence in this world is now mostly local, with this one non-local exception: if we are willing to make Him a Sanctuary in our hearts, He dwells among us and, indeed, within us. That is why when the Kotzker Rebbe (Menachem Mendel Morgensztern, 1787–1859) was asked, “Where is God?” he replied, “Wherever you let Him in.”

As we said earlier, an interaction between two particles propagates locally from one point to the next through a field. So too on a spiritual level, once we turn our hearts into miniature Sanctuaries, standing shoulder to shoulder, spreading God’s presence from one point to the next, the Presence of God will become revealed both locally (in us) and globally (in the world), as the prophet says:

For the earth shall be filled with the knowledge of the glory of God, as the waters cover the sea.” (Habakkuk 2:14)