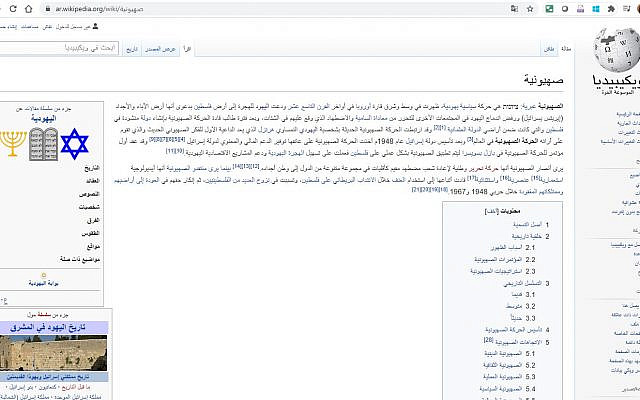 Screenshot taken July 19, 2020 from Wikipedia in Arabic for the word Zionism (https://ar.wikipedia.org/wiki/صهيونية)

This week I turned in a report for grad school regarding global communications. During the summer, I conducted research into the different ways that Zionism was understood. I interviewed author Yossi Klein-Halevi on its definition. And I found news articles, the majority of which were in Arabic. I used Google Translate, however imperfect, in order to see in English what they had to say.

Although outside of the scope of my research, I was also curious to see Wikipedia in Arabic’s take on Zionism (صهيونية). and looked that up too; https://ar.wikipedia.org/wiki/صهيونية begins:

Pretext. Hmmm… The entry goes on. It is long and encompasses many aspects of Zionism. And though its comprehensive list of references includes many Israeli sources, it mixes in unsubstantiated accusations like this. In another example, under the Zionist Personalities section, it says of Theodor Herzl, “the founder of modern Zionism and the main objective is clear leadership of the Jews to rule the world…” In contrast, the entry for Jews seemed much more factual. Nothing about ruling the world there.

For my actual research, my final selection included articles from a number of countries. One, called The Jewish question and the Zionist question, on the Saudi Arabian site, Okaz, shared a perception that ultimately implicated the West as well. Talal Saleh Banan wrote,

Historically: there is a Jewish issue in the West. Despite the controversy of the Jewish-Christian background of Western culture, Western societies reflect a negative view of Jews amounting to racial persecution. Fascism and Nazism tried a final solution to the Jewish question, by ethnically eliminating the Jews.

To be fair, the Jewish question in the West is due, in many respects, to the Jews themselves. Historically: Jews have not accepted the idea of coexistence with the societies in which they live, let alone imagine their assimilation into it. Jews preserved the manifestations of their social culture, with its abhorrent (racist) racist background. This was accompanied by a growing feeling of persecution that led them to develop aggressive strategies.

The writer goes on to say that the West is complicit in the problems that ensued, “The West dealt with the Jewish question, in many ways, including the most important one, trying to export it abroad. The idea of creating a national home for the Jews in Palestine in which the Biblical myths of Jews met in the interest of the West.” He credits the disproportionate influence Jews have gotten in Western institutions, government, media to have further exacerbated the problem and anticipates that one day Israel will threaten the Western countries that allowed it to come into being. Threaten.

While I could almost expect Wikipedia to paint Zionism as it did, I was flabbergasted at what I read coming from a country that Israel is actually on better terms with. Granted this is only one article and we do not know how may subscribe to this train of thought. But if it is representative, where do we go from here?

The research I carried out was within the framework of a Summer module for the Integrated Global Communications track of the dual master’s degree program I am in. For this reason, what I read makes me think about the concept of global communications. The more than the internet allows us to connect to people anywhere in the world, the more I think we need to be less married to assuming that what we can find is all that is worth seeing. When we arrogantly presume that news in English is the end all, we allow ourselves a blind spot. Translation tools and AI are improving daily, but maybe what we need is a way to simultaneously search in multiple languages.

I don’t know that technology can solve a hole in our awareness. Nor can it provide a direct conduit to offer those that get their news in other countries and languages another perspective. In some ways, it is as if we are taking our internal CNN vs Fox chasm and replicating it on a much larger scale. Within the United States, the separate news bubbles people live in certainly causes damage that is amplified by social media echo chambers. If we cannot solve that, how can we crack the nut that is foreign news? How can we better learn what others globally think if we limit ourselves to English-language press? 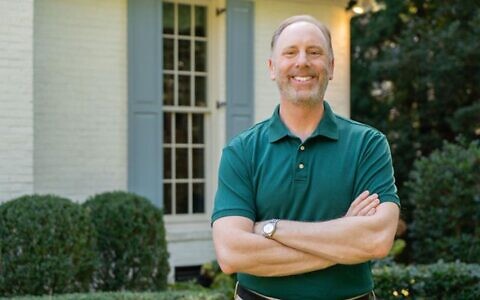 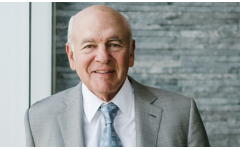 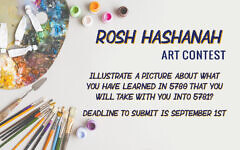 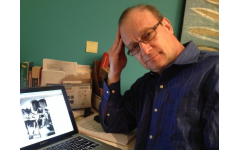 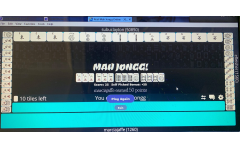 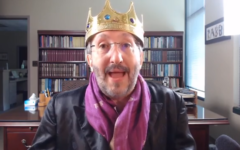