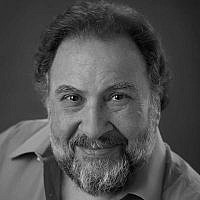 The Blogs
Moshe Waldoks
Apply for a Blog
Advertisement
Please note that the posts on The Blogs are contributed by third parties. The opinions, facts and any media content in them are presented solely by the authors, and neither The Times of Israel nor its partners assume any responsibility for them. Please contact us in case of abuse. In case of abuse,
Report this post.

“Anti-Zionism and Antisemitism: A False Dichotomy”

I am greatly troubled that we are confronting a false dichotomy that suggests that if American Jews sever their ties to Israel they will be spared being targets of antisemitism.

The “Zionist Project,” begun in the late nineteenth century, was based on a central tenet of Classic Zionism: Antisemitism is a permanent and inevitable feature of the human condition and the only permanent solution to this problem was to create a Jewish state in Palestine. Thus, with the establishment of the state of Israel, Jews in Israel and the Diaspora, the goals of “Zionist Project” were achieved. Israel serves as a haven of protection from Antisemitism for Jews everywhere in the world, no matter their ideological viewpoints.

However, some classical Zionists insist that the “Zionist Project” is far from over since antisemitism still exists and threatens Jews all over the world. They regard anti-Zionism as modern-day antisemitism since it denies the self determination of the Jewish people.

Another view, held by “purist” anti-Zionists, regards vehement and vitriolic criticism of Israel as in no way antisemitic. Ant-Zionists claim that they are not antisemitic while many call for the dismantling of Israel and the elimination of Israel as state among states. They ignore that their statements and actions, and other efforts to exclude Israel from the family of nations instigate antisemitic feelings all over the world.

The anti-Zionist viewpoint has dangerous ramifications for Jews everywhere in the world. The Left uses anti-Zionism as their cudgel. (I am always confused and angered why our progressives do not support progressives in Israel rather than castigating it. Are American Progressives ignorant of such efforts that ask for our support, or do they purposely refuse to align themselves with forces within Israel that struggle for social, economic, and political change?) The Right and its conspiracy theories see Jews as manipulators implementing “Replacement Theory” to bring multiculturalism into the mainstream of America’s social fabrics, thus undermining white supremacy.

Whether one is emotionally tied to Israel as one of the touchstones of one’s Jewish identity, or rejects a connection with Israel, antisemitism is on the rise because of these extreme edges of the American political spectrum.

This is not new; US history has often witnessed contradictory versions of Jews, based on antisemitic and political motivations, especially in the 1930’s. Communists opined that Jews were heartless Capitalists and Conservatives saw them as Socialists wanting to redistribute wealth.

Whatever their motivations of anti-Zionists, I deeply regret that our kids and grandkids may believe that if they sever their ties to Israel they will be spared being targets of antisemitism.

We should not rely on knee jerk reactions to the current situation; we have a mandate to become far more knowledgeable and sophisticated in our reaction to anti-Zionism and antisemitism. The resources are out there, and in the words of Hillel: We need to “Go and Study.” When we feel confident that we have examined the complexities of the Israel-Palestinian conflict, the history of Zionism, the multiple narratives we encounter in our explorations, we will be able to impart a coherent expression of our thoughts and feelings about Israel and its place in our world to the next generation.

Opinions expressed here do not reflect  policies of TBZ.

About the Author
Reb Moshe Waldoks is the founding Rabbi of TBZ (Temple Beth Zion) an independent congregation in Brookline, MA. A graduate of the Hebrew University, he earned his doctorate in Eastern European Jewish Intellectual History from Brandeis University (Hillel Zeitlin: The Early Years). He was ordained as a non-denominational Rabbi by Rabbis Zalman Schachter-Shalomi,z"l, Everett Gendelr z"l and Rabbi Arthur Green, yibadel lekhaim arukim. He is the co-editor of THE BIB BOOK OF JEWISH HUMOR still in print for over 40 years.
Related Topics
Related Posts
Comments