Based on the title of Danusha Goska’s new book, God Through Binoculars: A Hitchhiker at a Monastery, I expected a spiritual road memoir, a linear record of a search for insights and comfort leading to a monastery and closing with lessons for the life beyond the gates of the retreat house.

Readers will finally reach the Holy Cross Abbey in Berryville, Virginia, with remarkable encounters at every stage, but, like the Children of Israel leaving Egypt for the Promised Land, Goska’s literary journey eschews the most direct path.

Instead, New Jersey author Goska has crafted a book with layers of keen insights on topics ranging across the anatomy of hyenas, peregrine falcons, the nuances of hitchhiking, an unblinkingly candid blue-collar family memoir, the grim faces of Mesoamerican art, Catholicism, Judaism, the perils of life as an adjunct academic, the pleasures of serious birdwatching, a primer on clear writing and, of course, the mechanics of the spiritual retreat at Holy Cross Abbey in 2005. 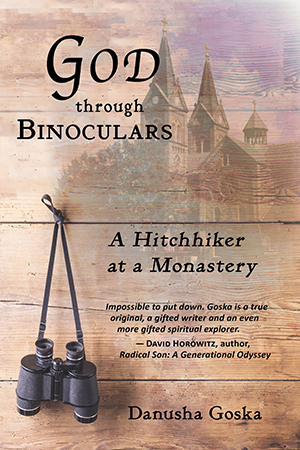 Goska also wrote Bieganski: The Brute Polak Stereotype in Polish-Jewish Relations and American Popular Culture, a book that upended the way I look at depictions of Poles in the general culture and in Jewish culture. Given that book’s impact, I wanted to read her new one. More than in Bieganski, God Through Binoculars employs a style I can only describe as urgent meanderings. Goska’s brutally honest and intense in her observations, but she takes the time to follow her instincts on topics that seem far removed from the main theme of the book. And then she ties them together.

This being the Times of Israel, I’ll focus on the Jewish layer of Goska’s literary creation. Indeed, God Through Binoculars begins with references from the Tanakh (and the New Testament), when she writes,

I also doubt. The very God I am supposed to love has beaten me down to nothing more than a chalk outline on the sidewalk. “How long, oh Lord, how long?” the ancient Jews asked in Psalm 13, in Revelation 6, and in Habakkuk 1.

The passage sets the stage for a description of Goska’s difficult upbringing as the American-born daughter, the last of six children, of a Polish father and a Slovakian mother. Goska views herself as a member of two distinct “tribes,” the Biblical Seeker Tribe and the Thoreau Tribe, “the folks who go to the woods to live out their full humanity in a way that is not possible in civilization. This leads her to birdwatching and deep, unsentimental view of nature. The interlocking connections of nature and faith form the superstructure of the book. That love of the outdoors leads her back to her Catholic faith, and its roots in Judaism. Goska muses,

Moses encountered God not in a temple, but in “the far side of the wilderness.” Jesus, like me, went to the wilderness; in seeking the divine “he was with the wild animals.“

Goska neatly connects her discussion of hyenas to the wild side of the Bible with a passage on what the Gemara says about the gender-disrupting nature of hyenas (e.g., false penises on the females), as outlined by “Zoo Rabbi” Natan Slifkin. The prophets Isaiah and Jeremiah both mention the beast, as when Isaiah warns that “ruined houses will be full of hyenas.” Before long, Goska turns her attention to Job, with an interpretation that sees the book as “the Bible’s most exuberant celebration of the natural world,” with mentions of goats, lions and the awe-ispiring leviathan and behemoth (probably a crocodile and a hippo, respectively). On a grimmer note, Goska mentions how medieval artwork and rumormongers compared hyenas to Jews.

Slifkin found inspiration in the Perek Shirah, an Ancient Jewish text in which all of creation, from stars to dogs, sings God’s praises. In rabbinical literature, Slifkin came across this promise: even the hyena “has its hour.” “To have its hour” is an unusual phrase, he said, found only in one other place “in all of Mishna, Talmud, and Midrash”: “do not be scornful of anything, for there is no person who does not have his hour, and there is nothing that does not have its place.”

The prophetic focus shifts when Goska segues to her experiences at the monastery. Thinking about contemplatives in different faiths, from Desert Mothers and Fathers to Tibetan monks, John the Baptist and Buddha, she describes the prophet Elijah, who encountered God not in the razzle-dazzle “special effects” of winds and earthquakes, but in the “still small voice” found in 1 Kings 19:12. She even relates a story with a midrashic quality that connects the sociology of monastic life to, of all things, the coming of Moshiach. It is short and deserves to be fully quoted:

I once heard a folktale about a monastery that was going downhill. The monks were sniping at each other and slacking at their tasks. One night a Jewish traveler sought refuge in the monastery. Before leaving the next day, the traveler imparted a secret to the monks. “I have received a vision from God. One of you is the Messiah.” He wouldn’t tell them which one. Then he went on his way. They all started treating each other better, thinking, hey, this monk could be the Messiah. The Jewish traveler saved the monastery.

The Jewish influence rolls on through the book: the idea of Moses and the Israelites meeting God face-to-face, the standing posture for the Amidah prayer, a quote from Rabbi Levi Yitzchak of Berditchev, inspired by a dispiriting visit to the monastery gift shop (“The God you don’t believe in, I don’t believe in either”), the trees the Jews hung their harps on in Babylon, the pervasive if unexamined influence of Judeo-Christian values on society, Primo Levi, Janusz Korczak, Viktor Frankl, the Jewish influence just keeps coming. I’ll leave it to the reader to discover all the other references.

Beyond that, the book clued me in to life in a monastery and what goes on in a retreat. That’s never been part of my expression of Judaism, but I have Catholic friends who do attend retreats. God Through Binoculars helped me envision what might happen, from the silence to the services to the food to encounters with strangers drawn to the retreat house by their spiritual yearnings. The next time I’m in Jerusalem and see monks strolling around, I’m sure I’ll remember Goska’s observations on her pilgrimage.

In that sense, I’ll be looking at the stuff of life through fresh binoculars, courtesy of Goska’s book.