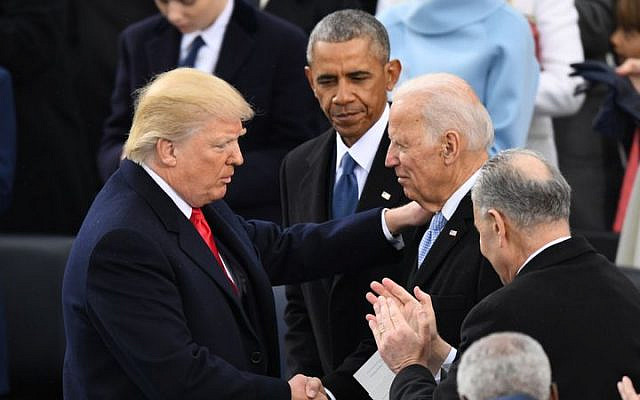 Every American must recognize the importance of praying for the success of the President on inauguration day. Irrespective of one’s support or opposition to the President, Americans need Divine favor to rest upon America’s leaders. As President Obama said to incoming President-elect Trump, “I believe that it is important for all, regardless of party and regardless of political preferences to now come together, work together to deal with the many challenges we face. Most of all, I want to emphasize to you, Mr. President-elect, that we now are going to do everything we can to help you succeed, because if you succeed then the country succeeds.”

Opponents and enemies should never be confused. President-elect Biden reminded us, “To make progress, we have to stop treating our opponents as enemies. We are not enemies.” American Republicans and Democrats both serve in the military as brothers and sisters in arms. They fight united for the good of the country and their attitude on the battlefield should be exemplified by all Americans. As Thomas Jefferson said so eloquently, “Let us, then, fellow citizens, unite with one heart and one mind. Let us restore to social intercourse that harmony and affection without which liberty and even life itself are but dreary things.”

This Wednesday, and everyday after that, I will pray for President Biden and his administration. I will praise the President-elect when he takes steps I agree with and I will criticize him when he takes steps I disagree with. I took issue with many of the policies he ran on during his campaign, but come Wednesday, he will lead the country and all Americans need him to succeed.

I will pray that President Biden and his administration will unite a fragmented America. I will beseech God that He help the President heal our nation from COVID, shore up our economy and restore America to the healthy and prosperous nation it was before this deadly disease spread. I will ask God to aid President Biden in protecting America from its enemies, both foreign and domestic, and allow President Biden to vanquish America’s enemies like Iran, North Korea and Venezuela. I will pray with fervor that President Biden take care of America’s top ally, the State of Israel, and give him the wisdom to strengthen the U.S.-Israel relationship.

On Wednesday I will offer a special prayer using the words of America’s former presidents, “With Malice toward none, with charity for all, with firmness in the right, as God gives us to see the right, let us strive on to finish the work we are in, to bind up the nation’s wounds (President Lincoln). There is nothing wrong with America that cannot be cured by what is right with America (President Clinton) In reaffirming the greatness of our nation we understand that greatness is never a given. It must be earned (President Obama) This great Nation will endure as it has endured, will revive and will prosper (President F.D. Roosevelt). Dear God, please give President Biden the strength to make the Presidency and America great again (President Trump).

If you’re an American or care about America, I invite you to pray for God to bless the President. Prayer is one of the most powerful tools we can use to solve the world’s problems. Prayer requires no special standing, no intermediary, and no great wisdom. Prayer simply requires an open and caring heart. Turn to God this Wednesday, unite with left wing, right wing, conservative and liberal, Republican and Democrat Americans and people around the world as we ask God to bless the President, Vice President and all the officers of the United States of America.