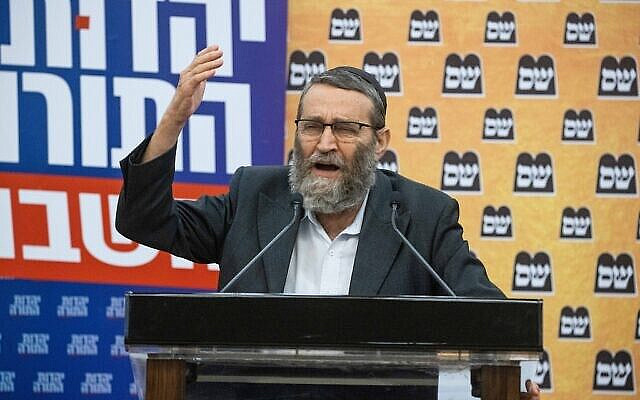 Watching the press conference held by the leaders of Israel’s two ultra-Orthodox parties on Tuesday, June 8, 2021, reminded me of a historical reenactment of the days immediately prior to the destruction of the Second Temple in Jerusalem. Then, as now, the princes of Israel are filled with baseless hatred, so worried about their own holiness according to their own interpretation that they would rather burn the country down than live in a land that does not bow to their interpretation of the Torah (Yoma 9b). Then, as now, the Biryonim are threatening to spark a fire in the region, intent on bringing about a messianic moment all because their worshiped leader believes in purity before compromise. Then, as now, the silent majority watches on and tsks.

It is not an overstatement to say that one of the more shocking moments of our current historical drama was to witness the merciless, degrading attack by the representatives of ultra-Orthodox (Haredi) Jewry in Israel on the person who would potentially be Israel’s first Shabbat observant Prime Minister, Naftali Bennett. “Take off your kippah,” they yelled from the stage, to the kippah-wearing Bennett and his mainly religiously-observant party. “This is an unprecedented attack on Judaism,” they exclaimed, as if they represent Judaism. Without irony, these Non-Zionist (and some would claim anti-Zionist) Haredim claimed this was the end of the Jewish nature of the State of Israel.

Many have sought to explain why the Haredi leadership has gone to such great lengths to attack observant Jews and their beliefs on the eve of a new government in which they will not have a part. Many have focused their explanations on the fact that the Haredim have gotten used to their access to power and money from their near-absolute participation in the governing coalition over Israel’s 73 years, since Israel’s first Prime Minister, David Ben-Gurion, crafted the first Haredi-backed coalition. Many have commented that the telling reaction was based on Post-Traumatic Stress from the last time the Haredim were kept out of the government, when Yair Lapid’s father and Avigdor Lieberman advanced far reaching reforms that they have been seeking to undo and protect themselves from ever since. I believe that is only part of the story.

What I gather frightens the Haredim more than a loss of temporary political power is the symbol of a religious Prime Minister for the State of Israel. One that follows a different stream. Until now, Haredi papers have been able to portray themselves as the heroes of their narrative, guardians of Judaism, keeping the secular elites of Israel in check. The leadership has done everything it could to obscure or obfuscate the role of others in the eyes of their public, going so far as to edit out pictures of women ministers, of women parliamentarians, of women in general. With the election of an observant, God-fearing Jew to the seat of Prime Minister, the Haredi leadership will no longer be able to hide that Israel is not the craven, anti-religious country that many of the Haredi community’s children are taught it is.

This narrative — of the Haredi leaders as the champions of Judaism, and Israel as a godless cesspool — is critical for the maintenance of Haredi power among their own base. This narrative is very similar to that of supremacist movements worldwide: the True Jews, True Christians, True Muslims, the True Believers who call the believers to rally around their flag and who justified their self-serving actions because the world is an evil place.

Of course not all Haredi Jews are supremacists. There are those who pray and let pray, who understand that the Torah has always had 70 faces, who recognize the long history of marginalization they themselves faced and want no part in bullying other Jews.  We need to separate the supremacists that represent this community in political circles from the everyday heroes who are more moderate in their actions and simply want to live a good life in line with their tradition.

Because just as the Haredi leadership has not faithfully represented the best interests of their peoples, so too has the secular leadership of Israel used and abused its electorate, selling the Jewish identity of Israel’s Jewish citizens for the spoils of a coalition. One secular Prime Minister after another has deepened the Haredi control of the Rabbinate, of the multi-billion shekel Kosher industry, of education, of public health.

Israel is the only country in the world where the majority of the world’s Jews — who are not Haredi or orthodox — cannot be married, divorced, or buried because of the ruthless control of a small minority of supremacists who could help bring together a coalition. And worse, as Dan Ben-David and other scholars have noted for decades, the economic and social costs of granting the Haredi leadership their pork barrels in return for a stable coalition have led Israel to the brink of a demographic-economic crisis we will soon be unable to claw ourselves back from.

Until now, no Prime Minister had either the self-confidence to declare the legitimacy of his or her own Judaism as equal to that of the Haredim, or the desire to waste political capital on what to the secular is an irrelevant measure. My hope is that the current coalition, underpinned by devotedly religious figures who have been trampled on by the Haredi leadership, will find both the self-confidence and the political capital to fundamentally open up Israel’s religious architecture to enable all of Judaism’s expressions to flourish.

God forbid we continue to allow a small sect of supremacist Jews to define Judaism for the rest of us, and for the State of Israel. God forbid we enable under the guise of the status quo a deepening of oppression of women and an erasure of their very existence from public consciousness. God forbid we allow a small sect of our ancient people to define who or who not to admit within that people, to impede who our  people marry, to stop our people from burying our dead alongside us. And God forbid we sit by idly as these Haredi supremacists call for Israel’s first Shabbat-observant Prime Minister to take off his kippa because he has in some way offended their political sensibilities. It is time for all of us who believe in the mixed multitudes of the Jewish People worldwide to strengthen the hands of the new government in Israel to bring back the spirit of pluralism in Israel, a reflection of the Torah’s 70 faces that has enabled us to survive as a people united in our differences for so long.