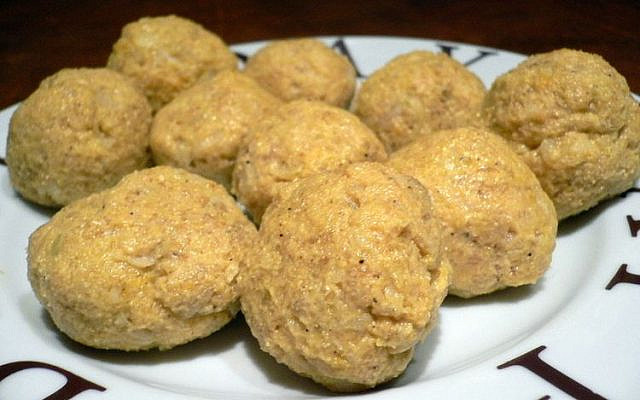 Gondi, the Iranian Jewish dumpling that you will savor

No Shabbat dinner in any Iranian Jewish home is complete without our traditional “Gondi” dumplings. This food is perhaps the only dish that is specifically created and made by Iranian Jews for generations and in many ways a delicious dish that has kept us together for generations. A few months ago some Ahskenazi friends of mine visited our family home and pleasantly delighted when trying Gondi for the first time. They claimed it was an Iranian “matzo ball” when looking at it, but I quickly reminded them Gondi was far tastier and could not easily be replicated. Even after fleeing Iran over the past four decades, Gondi has been one of the Iranian Jewish culinary delights and traditions that still endures.

Gondi, (pronounced go-n-dee) is perhaps the single most unique food to the Jews of Iran and is on the dinner table of most Iranian Jewish families for their Shabbat dinners. Prepared as dumplings that are cooked and served in chicken soup, Gondi is the traditional side dish or appetizer Iranian Jews enjoy along with a Middle Eastern bread as well as raw green vegetables including mint, watercress, and basil. It is typically served in a hot bowl of chicken soup with some families also adding in potatoes and a turkey leg. I’ve come to realize that the preparation of Gondi is not only a labor of love for Iranian Jewish mothers but enjoying the dish is always a time for families to gather and in a way reconnect with their past. Over the years, the vast majority of Iranian Jews have informed me that Gondi first originated in the Jewish ghetto in Tehran many years ago—exactly when, no one knows. Now before any Jews coming from a city either than Tehran gets upset with me, I must mention the fact that Jews from the other Iranian cities also claim to be the first inventors of Gondi. In any case, it was a special food prepared only for Shabbat dinner because its main ingredient of ground lamb or chicken was expensive. While Iranian Jews have over the centuries eaten the same types of foods as other Iranians, Gondi has been one of their few culinary innovations that they can claim their own.

Now if you ask older Iranian Jewish women what the ingredients of Gondi are, they will give you almost 100 different variations of the same ingredients. To the best of my research the following is a recipe for a serving of eight Gondi dumplings:

8 ounces or about 2¼ cups of ground chickpeas 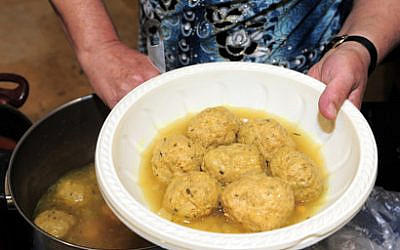 Again all these ingredients should be hand mixed very well, then water should be added to make a dough-like mixture. The mixture should then be refrigerated until well-chilled for about two to three hours. Next, when the chilled mixture is removed, the chef preparing the dish should dip their hands in cold water and divide the mixture into small portions. Each portion is then fashioned into balls about two inches in diameter. Finally the dumplings should be gently added one by one to a chicken soup that has been brought to a boil. The pot cooking the dish should be covered and left to simmer for about 30 to 40 minutes.

Preparing Gondi is no easy task and more often than not, amateur cooks fail in their first several attempts. Nevertheless, practice makes perfect and overtime anyone who is able to prepare a delicious tasting Gondi dish is typically given high praise in any Iranian Jewish family. My only hope is that younger Iranian Jews living outside of Iran will continue cooking this amazing dish not only because it’s delicious, but because it’s a part of our heritage that needs to be kept alive. Unfortunately since Gondi is not widely available to the general public and not cooked in restaurants, the older generation of parents and grandparents have a responsibility to pass on the recipes and techniques of cooking Gondi.

I bid you good eating and encourage you to ask your Iranian Jewish friends to indulge you with Gondi the next you visit them for Shabbat evening dinner!