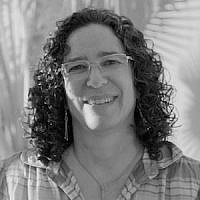 The Blogs
Marjorie Strom
Apply for a Blog
Advertisement
Please note that the posts on The Blogs are contributed by third parties. The opinions, facts and any media content in them are presented solely by the authors, and neither The Times of Israel nor its partners assume any responsibility for them. Please contact us in case of abuse. In case of abuse,
Report this post.

Tevya the Milkman, Shalom Aleichem’s character made famous in  “Fiddler on the Roof,” was nothing if not devout. But would the milk he sold pass muster in Israeli supermarkets today?

Probably not. To receive a certificate of kashrut in Israel today, dairy farms have to meet criteria that no foreign dairy farm meets. These requirements are expensive for the farmers, and in some cases actually hurt the cows. And many have nothing to do with Torah. I will concentrate here on the two most problematic topics: “Mehadrin (Glatt)” milk, and kashrut for Pesach.

Israeli supermarkets sell two kinds of milk: regular kosher and “Mehadrin” — super-duper kosher. Dairies are being encouraged (pressured?) into producing “Mehadrin” milk because it is easier for the supermarkets to carry only one kind. The problem is, Mehadrin milk cannot be milked by Jews on Shabbat. If you buy milk labeled “Mehadrin,” you are encouraging replacing Jewish Israelis with foreign workers. You are encouraging employers to hire on the basis of religion. And with no reason whatsoever. Exodus 20:10 tells us that resting on Shabbat applies not just to Jews, but also to “your male or your female servant or your cattle…” I think that it is pretty clear that Thai workers count as “your male or female servant,” and cows are, well, cattle. Despite clearly being work (if you don’t believe me, come try…) milking is allowed on Shabbat by two Halachic principles: the well known prevention of cruelty to animals (“tsa’ar ba’alei haim”) and the lesser known principle of “major loss” (“hefsed gadol”), according to which you are allowed to work on Shabbat if not doing so will endanger your livelihood. A cow not milked regularly will stop giving milk entirely. In short, we are allowed to milk on Shabbat, and having a “shabbos goy” milking instead of Jewish dairy farmers is not somehow more kosher.

The move to prohibiting Jews from milking on Shabbat only came after foreign workers came to Israel — until then it was not possible. While most dairies already rely on non-Jewish workers and therefore are happy to get an additional three agurot per liter for “Mehadrin” milk, a few rely mainly on self-labor. The reasons for this are both Zionist (the profits from the means of production we received from the State should remain in the State) and economic: the salaries of kibbutz or moshav members remain in the community. Since we usually cannot bring in workers just for Shabbat, removing Jews from Shabbat milkings necessitates hiring at least 2 full time workers. Three agurot per liter does not come close to covering this cost.

During Passover every Israeli dairy must change its feed so it will contain no “hametz.” Luckily, our cows are Sephardic and are therefore allowed to eat legumes (corn, peas, clover, alfalfa) — otherwise,  they would starve to death. As it is, for three weeks a year (because of time for transitioning), they are forced to eat a poorly balanced corn-based diet. This diet change is not because the grain actually enters the milk, but because Jews are forbidden to “enjoy” (profit from) the use of hametz during Pesach. The Orthodox are masters at finding loopholes — sell the milk the week before or after Pesach, for example — but somehow in this case, nobody tried. The mainly secular farmers accept changing the feed as an unfortunate fact of life. The rabbis who decide what will be considered kosher are completely removed from agriculture. Unlike the rabbi in “Fiddler on the Roof,” who knew that his livelihood depended on Tevye’s ability to pay a tithe to the synagogue, today the farmers depend on the state-paid rabbis to declare that their produce is fit for the Israeli market. Why should the rabbi help us follow halacha without hurting both our cows and our livelihood?

An Orthodox friend, after receiving advice on solving a technical problem that involved several manual steps, commented “and next we’ll go out and milk the cow and make butter.” When I reminded him that some of us earn our living from milking he apologized, but his joke was not surprising — most Israelis, religious or secular, think of “milking the cows” as some quaint obsolete activity out of “Little House on the Prairie,” not the modern occupation of several thousand Israelis.

Why should the average Israeli care about the definition of kosher milk? Three reasons: cruelty to animals, the cost of food, and freedom of occupation.

Unlike humans, who enjoy variety in diets, cows need a constant diet; the annual change for Pesach causes stress. While animal rights activists may think dairy farmers are by definition heartless and cruel to animals, in reality most of us care greatly about the animals we work with and hate seeing them unnecessarily stressed.

Much has been written in recent years about the cost of food in Israel, with blame placed squarely at the feet of Israeli farmers. But not many mention the added cost of kashrut for Jewish farmers, which comes to about 5% of the cost of milk, although it is difficult to calculate exactly. In 2012 the Ministry of Agriculture set the cost of “Mehadrin” milk to be the same as regular kosher milk, which means that its extra cost is moved to the secular consumer.

Finally, do we really want to live in a country in which people are prohibited from particular types of work because of their race or religion? Only Orthodox Jews can make wine. Only non-Jews can milk on Shabbat. Doesn’t this go against the basic law of freedom of occupation? This freedom can be curtailed only “by a law befitting the values of the State of Israel.” I have yet to be convinced that laws in the name of Judaism that disregard the Torah can be considered “befitting the values of the State of Israel.”