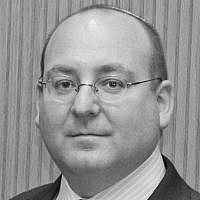 The Blogs
David Cheifetz
Apply for a Blog
Please note that the posts on The Blogs are contributed by third parties. The opinions, facts and any media content in them are presented solely by the authors, and neither The Times of Israel nor its partners assume any responsibility for them. Please contact us in case of abuse. In case of abuse,
Report this post.

I had dinner tonight at a charming place here in Poznan (formerly Posen). A beautiful 150 or so year old building. Not a regular apartment or commercial building, but a standalone building. It is now a cool, tasteful-but-not-pretentious restaurant.

Outside they have a bit of history about the building. When it was built. That in 1900 it was likely a post office. I also learned from a friend that the building stood in disrepair in recent years until someone restored it and converted it into this restaurant.

And I am thinking: Wow, what was here 100 years ago, near the end of WWI and right before Polish independence in 1919? Who might have been in this building in some capacity in WWII – Nazis, Polish resistance, Polish civilians, Jews in hiding? What was this building 50 years ago during Communism? Party hacks? Regular citizens suffering under Communism?

I love visiting Poland, where I come for work a couple of times a year, because the place speaks to me. Not in a morbid way. History comes alive walking the streets.

It is different from the feeling in Israel, where, yes, there is ancient history, but the pride is modern.

I have of course visited the camps, and grave sites, and will continue to do that. But Poland is more than just a place where many of our grandparents and great grandparents died suddenly and violently between 1939 and 1945, or where there were occasional pogroms – including the horrific Chmelnicki massacres in the 1640s – over the centuries preceding that.

Here in Poznan Rabbi Akiva Eiger was the religious leader of a relatively small community (relative to much larger communities in Warsaw, Krakow, Lublin, Lodz, and elsewhere). The local Jewish Community Center and small synagogue which I occasionally frequent is located in Rabbi Eiger’s old residence, a magnificent building that has been restored over time.

Walking the cobblestone streets, I cannot help but wonder if my great great grandparent walked these same streets, visiting from Belarus in the East, or migrating from West to East. My late grandmother once told me that one of her ancestors, perhaps her great grandmother, had come to the Minsk area from France. Did she travel through Poznan along the way?

I look at my friends and colleagues and complete strangers, almost all non-Jews, and wonder if somewhere, somehow, we share common ancestry.

Most of us are no longer living in Poland or Ukraine or Belarus or Russia or any of countries in Eastern Europe from where our parents, grandparents, and great grandparents came. But these places are still a part of us.

While my temptation from my teen years through my 30s was to forget our collective European heritage in light of the evil side of history, in recent years I have begun to embrace the good, the countries that lent our ancestors refuge and served as our home for 1,000 years.

About the Author
David Cheifetz has spent 20 years in the private sector, focusing on high tech and marketing. Before attending business school, David had a 6-year career in government public relations for the State of Israel working in the Consulate General of Israel in New York and at the Ministry of Foreign Affairs in Jerusalem. He is an activist of issues related to sexual abuse in the Jewish Community, and is the founder and president of a non profit - Mi Li - Who Is For Me - dedicated to the topic. David is also a member of the American Board of Directors of Gesher, an Israel based organization focused on dialogue and collaboration between religious and secular Jews in Israel.
Related Topics
Related Posts
Comments