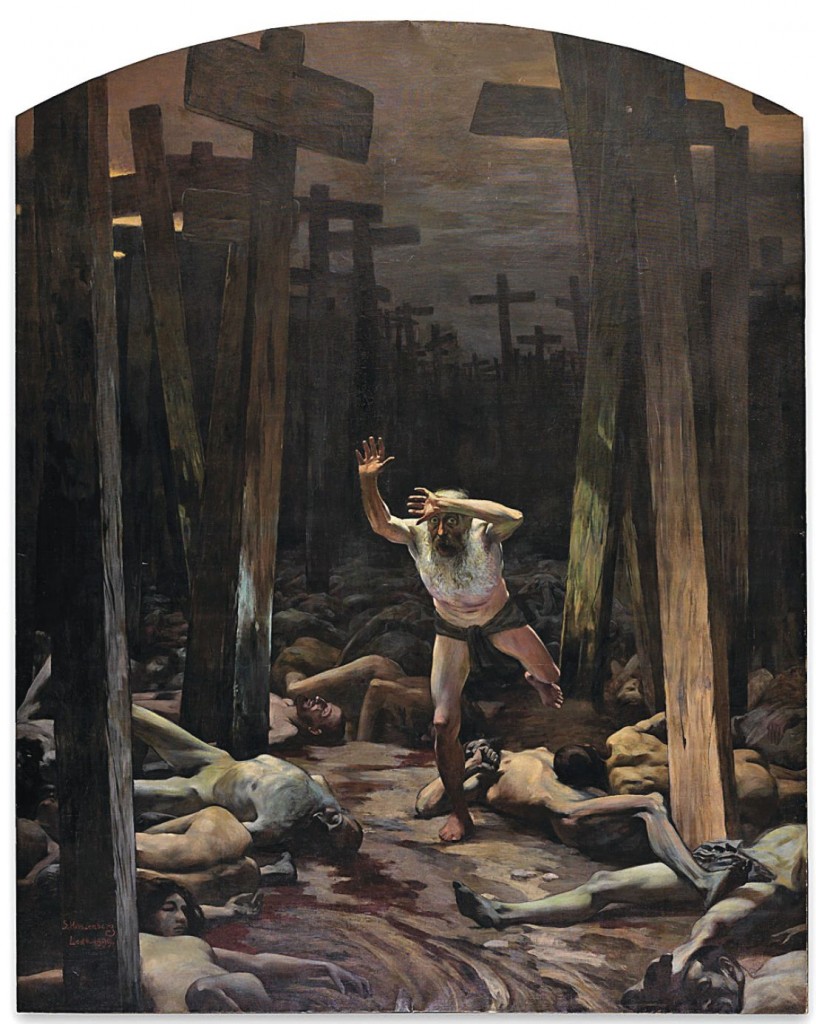 The Wandering Jew—guess the year

This is ‘The Wandering Jew’ by Samuel Hirszenberg.

Guess the year it was painted.

Consider the clues. The piles of emaciated, skeletal bodies, stretching into the distance, are reminiscent of the graphic photographs of corpses from Buchenwald and Auschwitz—was the artist inspired by these photos? Perhaps Hirszenberg survived the extermination camps himself, and the terrified man in the middle is the self-portrait of a lone survivor fleeing the carnage. The forest of crucifixes, subversively, suggests that the blood-soaked soil is European. Through the subversive use of Christian imagery, we are told that these are Jewish martyrs: God’s chosen children, slaughtered for their faith, comprehensively annihilated by a European civilisation that had always accused it of deicide. This is a portrait of the final act of the total destruction of Europe’s Jews.

This is Holocaust art, right?

Wrong. ‘The Wandering Jew’ was painted in 1899, 46 years before the liberation of Auschwitz. It was displayed at the Paris Salon in 1900, four decades before many French—some of whom might have seen this painting—colluded in deporting France’s Jews to their deaths.

The Holocaust was not a freak incident that happened when bad, intolerant people killed lots of ‘random folk’ they had conveniently made scapegoats. This was the final act of Europe devouring its Jews: 800 years after Jews were massacres in the Crusades, 700 years after they were expelled from France and England, 400 years after they were dissolved from Spain, and just decades after pogroms you’ve never heard of by European peasants mowed down men, women and children by the tens of thousands. The Holocaust was an explosion of mechanised murder abetted by civilians across the continent who profited from the (literal) liquidation of their Jewish neighbours.

To treat the Holocaust as a freak act of state violence against an unfortunate minority, shorn of this context, is an act of Holocaust denial. To draw analogies about the politics of intolerance in general, without reflecting on the centuries-old roots of this specific hatred, is an act of Holocaust denial. It is an attempt to absolve Europe of responsibility and blame only those bad men in leather boots, when this was the genocide that Europe wrought after centuries of target practice.

Warsaw used to be one third Jewish. Krakow, one quarter. Thessaloniki, half. Vienna, one tenth. Budapest, one quarter. Amsterdam, one tenth. Odessa, three tenths. Kiev, one fifth. In the Holocaust, Europe cannibalised itself. The look in the eyes of the Wandering Jew of Hirszenberg’s masterpiece is the look of a man who has seen an ocean of murder behind him—and can see a blood-drenched landscape stretching ahead of him into the distance. It is the look of a man who knows he is in an abattoir, and because there is so much death behind him—knows precisely where the trail of corpses will lead, but knows not where, or whether, it will ever end.