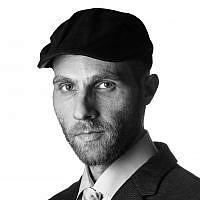 The Blogs
Ariel Ben Solomon
Apply for a Blog
Please note that the posts on The Blogs are contributed by third parties. The opinions, facts and any media content in them are presented solely by the authors, and neither The Times of Israel nor its partners assume any responsibility for them. Please contact us in case of abuse. In case of abuse,
Report this post.

A few weeks ago Haaretz.com published an article by a guy named Carl Perkal, who strongly criticized an article by Daniel Pipes entitled, “Israel’s Arabs, living a paradox.” In his delusional piece, Perkal makes a number of erroneous arguments, writing as if he did not actually read Pipes’s article.

Perkal writes that Pipes falsely claims that, “Israeli Arabs have increasingly resorted to violence against their Jewish co-nationals.” Perkal, as if from another planet goes on to counter, “This malicious statement is false and the facts are exactly the opposite. Based on all indicators, violence against Jews or other actions against the State by Arab citizens of Israel has decreased significantly in recent years.”

Arab plotting and attacks on Jews are a daily occurrence in Israel, from stabbings, to thefts, to thwarted kidnappings, Israeli Arab actions against Jews have definitely not “decreased,” but seem to be continuing at a high rate.

Try typing into Google, “Arabs attack Jews Israel,” and set the results to the “past month” for a sampling of the latest attacks. And surprise surprise, all indicators show red: “Arab Mob Attacks Jew in Jerusalem,” “Arab teens arrested in cemetery attack on groom,” or misleadingly titled, “Police: Israeli Wounded in Stabbing Attack by Arab.” The title should have stated “Jew,” not “Israeli,” in order to be more accurate (the title could have falsely implied that an Israeli Arab was attacked by another Israeli Arab).

Or how about this whopper by Perkal, “For sure the Arab citizens of Israel, as an indigenous minority, continue to raise serious challenges to their status as second-class citizens in the Jewish State and have proposed a dialogue with the Jewish citizens in order to advance their concept of Israel as a “state of all of its citizens.”

So the Arabs are indigenous, but the Jews are not? And by the way, Arabs have rights in Israel and do indeed take advantage of them. If only their Arab brothers in Syria and elsewhere in the Arab world were so fortunate. Moreover, a “state of all of its citizens,” is code for a state with an Arab majority that will remove Israel’s Jewish character.

To show evidence of Jewish violence against Arabs, Perkal reminds us about the supposed incident where Arab workers at the Jerusalem Malha mall were “attacked and beaten by Beitar jerusalem football fans…” Unsurprisingly, Perkal is a bit behind, since then Haaretz itself published an article where the police claim that the events as recorded on tape were “much less serious than reported in the media.”

Evidently, we cannot count on the editors at Haaretz, but we can count on the insightful analysis of Daniel Pipes.

Editor’s note: Carl Perkal’s response to this piece can be found here.

About the Author
The author is the deputy online editor at JNS.org and a writer on Middle East affairs. He covered the Middle East for The Jerusalem Post and is now writing a PhD dissertation at Bar-Ilan University on the Islamic Movement in Israel.
Comments