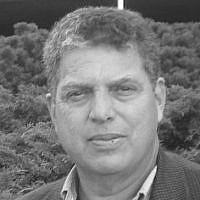 The Blogs
Carl Perkal
Apply for a Blog
Please note that the posts on The Blogs are contributed by third parties. The opinions, facts and any media content in them are presented solely by the authors, and neither The Times of Israel nor its partners assume any responsibility for them. Please contact us in case of abuse. In case of abuse,
Report this post.

Note: Following is a response to Ariel Solomon’s criticism of an op-ed I published in Haaretz.

For someone who is identified as a former “assistant researcher at the Moshe Dayan Center,” you too should have done your homework in your response to my opinion piece about Daniel Pipes.

With all due respect to your calling me “delusional” and “as if from another planet,” it is you who seems to have failed to do your homework along with Dr. Pipes.

But of greater concern to me is what you chose to ignore in my article; I won’t recap it all here but just a few salient points that you might want to look into and respond to in your response to my response to your response:

So, Ariel, rather than trying to score more points, I suggest you respond to the bigger picture as I have presented it both here and in my previous article. The fate of Israel may well depend on it.