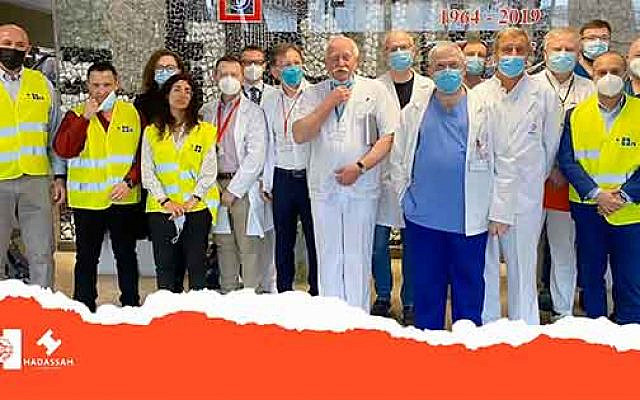 When Henrietta Szold, founded Hadassah, the Women’s Zionist Organization of America. in 1912 as a women’s Zionist organization to improve the health and welfare of the people of pre-state Israel, she probably could not imagine that the Hadassah of today would continue to support people in need from around the world. Today, Hadassah has reached out her hand to the Ukrainian people fleeing war and to the refugees arriving in Israel as well. Hadassah was founded with the intent to bring healing to the destitute and ailing people in Jerusalem. Currently, Hadassah has maintained this mission and has expanded it to bring healing to the people of Ukraine, and to the Jewish children of Ukraine in our Youth Aliyah villages.

I am writing today to share my pride at being a five-generation life member of this incredible organization Every woman in my family has been active in Hadassah since my great grandmother, founded a chapter in the 1920’s. I feel empowered and connected to Hadassah, because of the work Hadassah has been doing for people in need worldwide since our founding 110 years ago.

On February 24th of this year, Hadassah’s national president, Rhoda Smolow, and CEO, Naomi Adler, published a statement in support of the people of Ukraine.

“Hadassah is deeply concerned for the well-being of the hundreds of thousands of Ukrainian Jews and tens of millions of other Ukrainians. Together, they are facing the largest and most lethal military action on the European continent since World War II. We stand with them in full solidarity and pray for their safety.

“Too many civilians have already been killed. Many are fleeing for safety to neighboring countries, and some have found refuge farther afield — in Israel. We applaud the Government of Israel, the American Jewish Joint Distribution Committee (JDC), The Jewish Agency for Israel and other nongovernmental organizations risking their lives to provide support for Jews still in Ukraine and working to bring new Ukrainian olim to Israel. As Jews, we believe that whoever saves one life saves the entire world, and we are grateful for the bravery of those working to do so on the ground today.”

By March 2nd , Hadassah Medical Organization had coordinated an effort to send $25,000 worth of medical equipment to Ukraine, through the Ukrainian embassy in Tel Aviv. Professor Yoram Weiss, Acting Director General stated,

“In light of the request by the Ukrainian Embassy, we decided to assist as much as possible and to send medical equipment immediately to support the teams treating Ukrainian casualties inside the country and at its borders.

“Our hospitals are supported by generous donations raised from around the world by Hadassah, The Women’s Zionist Organization of America. We all believe that at such a difficult time, we need to rally to the cause. We have sent many medical delegations to disaster-stricken countries in the past, and our doctors and nurses are extremely experienced in dealing with difficult field conditions. That is why we are examining the possibility of sending such a delegation now.

“The State of Israel is well-acquainted with the harsh realities imposed on civilians during wartime. We at the Hadassah Medical Organization, our supporters at Hadassah, The Women’s Zionist Organization of America, and the entire State of Israel stand by the Ukrainian people and feel their pain.”

On Monday, March 7th, the Hadassah Medical Organization sent an emergency delegation to southern Poland, where Ukrainian refugees have been streaming across the border by the tens of thousands. The four-person delegation traveled to the Medical University of Lublin, the city’s largest hospital and just 70 miles from Poland’s border. They shared their experience with the local medical teams in how to triage trauma patients, and work with the Lublin hospital to assess the resources and personnel that will be needed to treat the refugees, whose swelling numbers may soon stretch the hospital’s capacity to its limit.

By Tuesday, March 15th, a second team of doctors from the Hadassah Medical Organization arrived at Ukraine border.

Led by internal medicine expert Ya’arit Rebak, MD, the team of Hadassah internists, pediatricians and nurses has been given medical responsibility for Ukrainian refugees at the border crossing close to Przemyśl in southeastern Poland. There, thousands of refugees are recovering from their ordeal and waiting to go to eastern Poland and elsewhere in Europe. The work, a joint effort of Hadassah and its sister organizations, Hadassah International and Hadassah Medical Organization is being coordinated with the World Health Organization, the Polish health authorities, the Polish Red Cross and NATAN Worldwide Disaster Relief.

To enable real-time guidance, the Lublin and Hadassah teams created a communication network with smaller hospitals in the region. At their request, Hadassah also produced a training video.

In Israel, Hadassah Medical Organization was the first hospital to receive victims of the war in Ukraine. A family of four was airlifted to Hadassah from Ukraine, after their home was hit by a missile outside of Kyiv. The mother, father and one son were injured and required surgery. They were airlifted by a New York based emergency flight organization. Hadassah was there to help.

At home in Israel, our Youth Aliyah Village of Meir Shfeya has welcomed 15 Ukrainian Jewish students who were supposed to arrive on the Na’ale program next September. Due to the war, we have taken them in early for their safety. They were welcomed to Meir Shfeya with the first Purim Carnival since Covid 19 arrived. They were met with joy and emotional support. Many of the students in our villages come from countries of the former Soviet Union. Some of the Russian students are worried about their families in Russia who are protesting the war. Hadassah is providing telephone connections whenever possible, although Russia has cut much of the communication. Our goal in the villages is to support our students not only academically, but also psychologically, so that we can prevent emotional damage during this challenging time.

Over 300,000 young people have graduated from the Hadassah-supported youth villages over the last 85 years. Among them is Mark, a graduate of Meir Shfeya known as an outstanding leader, a member of the Shfeya orchestra, an active volunteer at the Shfeya winery, and one of the founders of a nonprofit that prepares and delivers Shabbat meals to Lone Soldiers. Last week, Mark led a delegation of Meir Shfeya graduates — currently doing their pre-army IDF training — to bring much-needed supplies to those who have managed to escape the war to Kishinev, Moldova, known to many of us for the Kishinev Pogroms of more than a century ago.

I find it inspiring to be part of an organization that continues to do whatever it can to care for those in need. We are the largest women’s Zionist organization in America. We have Hadassah International chapters around the world and when there is a crisis, Hadassah steps up and does the work needed to make a difference and heal others.

Henrietta Szold believed in humanitarian aid, and what Hadassah is doing now for Ukraine is a real-life example of how we are continuing her mission. As Jorge Diener, the Executive Director of Hadassah International shared, “At Hadassah, we talk little but do much.” That has been the philosophy and practice of Hadassah for 110 years. For more information on how you can help our projects, visit this link.