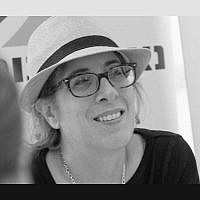 The Blogs
Nechama Goldman Barash
Apply for a Blog
Advertisement
Please note that the posts on The Blogs are contributed by third parties. The opinions, facts and any media content in them are presented solely by the authors, and neither The Times of Israel nor its partners assume any responsibility for them. Please contact us in case of abuse. In case of abuse,
Report this post.

In my previous post, I looked at the situation with regard to marriage in the State of Israel and the complicated reality in which the only way citizens of the state can marry is through a religious ceremony. With regard to Jewish citizens, only Jews who meet halakhic criteria for Jewish identity can marry, and only in an Orthodox ceremony. This is meant to preserve the homogeneity of the Jewish nation, but in fact, it creates a reality in which a large number of citizens simply cannot marry because of the halakhic criteria. As a result, many go abroad or marry in private ceremonies. What is their status? Below, we will look at the halakhic questions raised by civil or non-Orthodox marriage.

The overwhelming majority of Jews in the world marry in civil or non-Orthodox ceremonies. Are they halackhically married with all of the halakhic marital obligations because they live in a marital relationship recognized by society and by the Interior Ministry? Is a religious divorce/get required to dissolve a civil marriage? If there is no get and a woman remarries, are children from the new marriage mamzerim?

Halakhic marriage is legalized through a ceremony called kiddushin. The first Mishnah in the tractate of Kiddushin stipulates that there are three ways to facilitate kiddushin: money (kesef), a document (sh’tar), and sexual relations (bi’ah). Sexual relations were the least preferred and largely rejected mechanism used to facilitate marriage. Nonetheless, kiddushin is recognized when a man says to a woman in front of two valid witnesses, “behold you are consecrated to me through this sexual intercourse” and witnesses attest to the seclusion of the man and woman. This leads to a ruling in the Shulchan Aruch (Even Haezer 33:1) that such a statement followed by seclusion in front of witnesses equals marriage, but there is the caveat that both the intent to betroth and the designation of witnesses have to have been stated, in order for the relations to have any semblance of kiddushin.

How does this relate to civil marriage where we know for certain that the couple is having sexual relations in the framework of marriage, but the protocol for kiddushin has not been carried out?

Maimonides (Laws of Divorce, 10:17-19), based on the Talmud, narrows this principle to a very particular case involving a divorced couple who spend the night together. Other than that, sexual relations without kiddushin do not have any sort of legally binding power. Licentious sexual relations, thus, have no consequence regarding marital status for either the man or the woman, beyond the physical act. This became the accepted halakhic position.

Discussion of the status of non-halakhic marriages emerges more frequently from the 14th century on. Rav Yitzhak ben Sheshet Perfet (1326-1408), known as Rivash, a Spanish halakhic authority who fled to Algeria following the persecution of the Jews in in Spain in 1391, addressed this issue at great length. In a responsum (Responsa Rivash 6), he describes how he was approached by a woman converso (anusa) from Majorca with her small child. She had been married to another converso by a priest and had been forced to convert to Christianity. They lived together for several months as a married couple, were known to the converso community as such, and she became pregnant. Her husband had disappeared across the ocean and she wanted permission to remarry.

Rivash concludes that marriage performed according to the customs of non-Jews and their priests, is not considered to be kiddushin and such a ceremony conducted between two Jews is seen as a clear rejection of kiddushin. This distinction between kiddushin which defines halakhic marriage and all other ceremonies that do not, opened an important avenue for us today regarding how to relate halakhically to Jews who deliberately forego kiddushin. In addition, Rivash gives a socio-legal status to the couple’s relationship. He gives the woman the status of concubine – a known halakhic entity in the Middle Ages, which freed the relationship from suspicion of promiscuity, and yet did not regard them as married, which in turn alleviated the necessity of a Jewish divorce.

Rabbi Yisrael Isserlis (1390-1460 Austria), known as Terumat Hadeshen, came to a similar conclusion. A pregnant young woman came before him claiming that the pregnancy was from a man who had promised to marry her. The man denied all paternity claims and claimed that he had proof that the young woman was in fact notoriously promiscuous. Given his denial, the woman wanted permission to marry another man. The question of whether a get was necessary based on her paternity claim was examined. In the course of his responsa, Rabbi Isserlis agreed with Maimonides, that a premarital sexual relationship does not automatically transform two single people into a married couple.

It must be noted that there are other early halakhic authorities who disagreed with this approach. Their reasoning largely rests on the idea that when a couple choose to live together as husband and wife and are regarded by society as married, this translates into a halakhic marriage, even if the protocol for performing the marriage ceremony was not upheld.

In short, couples who marry without kiddushin are not considered married according to Jewish law and a get is not necessary. Rabbi Moshe Feinstein (1895-1986), in the 20th century, extended this ruling to Reform marriage ceremonies, explaining that the Reform movement does not show fidelity to halakha and so their marriages, even when performed with huppa and kiddushin, are not to be considered halakhically authentic. This reasoning was later extended to marriages performed by Conservative rabbis.

As with many things, however, there was a major wrinkle. Rabbi Yosef Eliyahu Henken (1881-1973), a prominent halakhic authority in America in the 20th century, felt strongly that civil marriages and certainly Reform marriages are halakhically binding. His approach reflects the halakhic approach that we mentioned earlier: marital relationships, in whatever form they are undertaken, reflect a commitment modeled after kiddushin and as a result they have the legal validity of kiddushin. He argued that being known in public as man and wife is enough to require a get and, certainly, if there was any wedding ceremony, even one with halakhically invalid witnesses or performed by a Reform rabbi. The woman in such cases needs a get to remarry. Rabbi Moshe Feinstin categorically rejected the validity of civil or Reform marriages in a series of responsa written in the late 1950s, in which he argued with Rav Henkin. Nonetheless, out of deference to the opposing opinion, he maintains that in all cases one should try to obtain a get.

Despite the overwhelming majority of halakhic authorities who do not see civil or non-Orthodox marriage as having halakhic status, the de facto position is to require a get regardless. If there is a case where it becomes impossible to obtain a get, there is room to be lenient but overall, when a halakhically Jewish couple comes before the rabbinic court to work out a divorce settlement, a get is mandated even if the marriage ceremony was not halakhic.