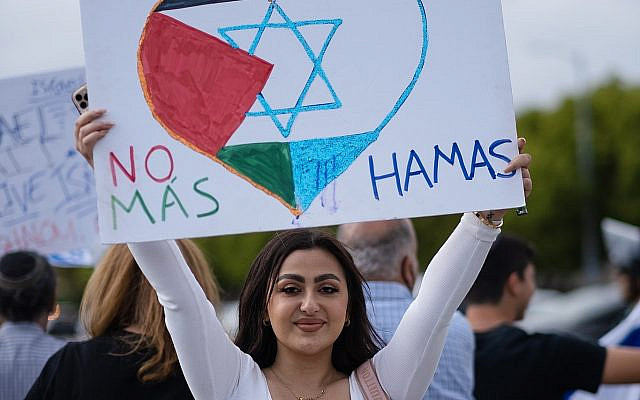 In a rare pro-Israel demonstration, a woman stands against Hamas, and in support of ordinary Palestinians, at a rally in front of the Federal Building on May 16, 2021 in Los Angeles, United States (credit: Wikimedia/Levi Clancy).

The latest Israel-Gaza war started with Hamas launching hundreds of rockets into Israeli cities. For the few people who might have lived in a cave in the last few hundred years, let me inform you of something: targeting civilians is a war crime. It was very clear from the start, as Israeli commentator Haviv Rettig Gur and Palestinian human rights activist Bassem Eid both pointed out, that Hamas’ motivation was cynical political gain. But even if Hamas’ motivation was pure, attacking civilians is a war crime.

We also know that by attacking Israel, Hamas was ensuring that Israel would respond, and that even with Israel’s best attempts at avoiding civilian casualties, there would be some Palestinian deaths.

So, it was very clear from the start of the war that Hamas had chosen to engage in a war crime that was sure to result in Palestinian deaths. I know that I’m repeating information that was most likely already well known to the reader when I first said it, but you know what? The vast majority of the world apparently didn’t know.

The vast majority of the world immediately ate out of Hamas’ hands and kept eating throughout the war and even after.

People demonstrated all over the world denouncing Israel for exercising the right of every nation, defending itself when attacked, and particularly defending its helpless civilians – some of whom were killed by Hamas – who had to suspend normal activities and hide in bomb shelters.

People were horrified to see images of Palestinians killed by Israeli strikes, ignoring the fact that Israel was simply defending itself with, as Haviv Rettig Gur wrote, “a level of surgical precision that may well be unprecedented in the annals of modern warfare”.

In the end, considering Israel’s military capabilities, the total amount of casualties and damage caused during the whole war is something that Israel could have caused in a single strike. The fact that after eleven days of Israeli attacks on Gaza there are so few casualties and so little damage is because Israel wasn’t trying to kill people or cause unnecessary damage. It was simply trying to reduce the terrorists’ capabilities to attack again. The world’s protesters ignored that.

Hamas’ cynical play, that was sure to send some Palestinians to their graves and that did not resolve any of the Palestinians’ grievances, was not denounced by the world. Instead, it was seen by many people as justification for more antisemitism. The number of antisemitic attacks grew dramatically around the world, as Human Rights Watch and the Anti-Defamation League reported.

Haviv Rettig Gur explained that this war resulted in extensive damage to Hamas’ infrastructure, so this war was a tactical setback to Hamas from a military point of view. Thankfully, US President Joe Biden resisted attempts by other UNSC members and by some members of his own party to end the war before Israel could deliver a severe blow to Hamas. But for Hamas’ long-term goal, and even for its short-term political goals, the war was an unmitigated success.

Hamas has told us repeatedly what its objective is: destroying Israel. Until it can achieve that goal, it must maintain its popularity among Palestinians and maintain its international support. In this war, it has achieved those necessary short-term goals, and by increasing hatred against Israel and the Jews, it has ensured that its long-term goal of destroying Israel remains at the very least credible to its supporters.

If the world’s protesters really cared about the Palestinians, they would be protesting against Hamas, not against Israel. If the world responded to Hamas’ ploy in a way that was even minimally intelligent and ethical, events would have unfolded very differently.

When a country is forced to defend itself against terrorists who attack its citizens, intelligent and ethical people don’t ask questions as to what could have motivated the terrorists. It doesn’t matter. They support the country especially if it responds ethically and without targeting civilians. That’s what happened to Israel, and that’s how Israel responded. So, supporting Israel’s right to defend itself is not only the right thing to do but the necessary thing to do. It is what anyone would expect if they were targeted by terrorists. But many people chose to demonize Israel, and by doing so, they were on the side of terrorists. Many people chose to excuse Hamas, and by doing so, they were terrorist appeasers. And many people said nothing and washed their hands of a problem that didn’t affect them directly.

This was not even Hamas’ first success at conning the world. It has done so repeatedly since Israel withdrew unconditionally from Gaza in 2005. Every time, Hamas puts Palestinian lives at risk, and every time the world blames Israel. Hamas’ con was highly transparent as well as highly predicable, yet the world fell for it yet again.

In this Israel-Gaza war, as in previous ones, the intelligent and ethical thing to do was to support Israel. When the terrorists attack again, knowing that their con game is likely to work again, Israel will have to respond again, and more Israelis and Palestinians will die. Just like those who did not stand with Israel in previous Israel-Gaza wars, those who did not stand with Israel this time will have blood on their hands.