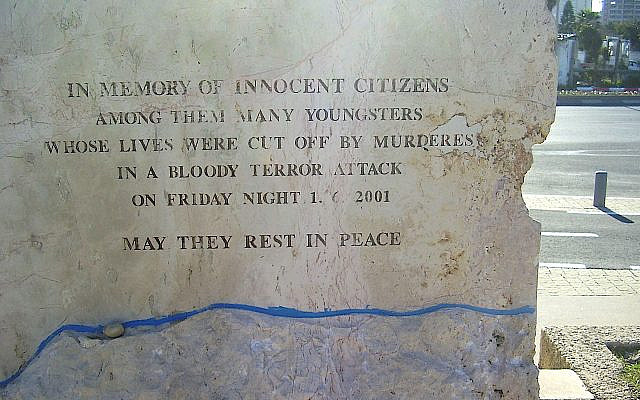 It was exactly 20 years ago. My wife and I were attending a Shabbat dinner in Madrid on June 1st when someone gave us the news.

A suicide bomber had struck a seaside discotheque, the Dolphinarium, in Tel Aviv. There were reportedly many casualties.

The final death toll was 21 youngsters, ages 14-25. They were mostly Russian-speaking immigrants out for a night of fun. Another 100 people were wounded.

The terrorist was armed and sent by Hamas. His aim was to kill as many Israelis, as many Jews, as possible.

His father, upon hearing the news, proudly declared his son to be a “martyr.”

The US government pressured PLO Chairman Yasser Arafat to condemn the deadly attack, which he eventually did. Later, it was discovered that Arafat had personally signed an authorization slip to pay the terrorist’s family several thousand dollars — standard operating procedure for the Palestinian leadership, even as it has chronically cried poverty to the outside world.

Within hours, an Israeli came to the site of the horrific attack and scrawled, in six words that capture the country’s indomitable spirit, “They won’t stop us from dancing.”

And someone else added, “This is our home.”

I visited the two adjacent monuments to the bombing the other day. On one, the names of the 21 young people are written in both Hebrew and Russian, with the words “May their memory be for a blessing.” On the other, those two lines — “They won’t stop us from dancing” and “This is our home” — are highlighted.

Some relentless critics of Israel would ask what was the “provocation” for the Hamas bomber.

Surely, there must have been something, perhaps a legal battle over housing or the desecration of a Muslim holy site, or frustration over peace talks, they would claim, just as they have done in recent weeks. After all, a Palestinian wouldn’t just blow himself up and kill others for no reason, would he?

But the answer then, as now, is quite different – and totally incomprehensible to some in the West.

The terrorist was brainwashed to believe that, in doing the bidding of Hamas, he was actually doing the bidding of his Supreme Being, at least in the warped religious interpretation of Hamas leaders. And the divine reaction would be a privileged place in the afterlife for this “martyr,” who killed 21 Jews in the prime of their lives.

Sound far-fetched? Read the Hamas Charter. It’s all there – the blend of genocide against the Jews, annihilation of Israel, emergence of an Islamist caliphate, and veneer of theological sanctification.

By the way, just to be clear, months before the Dolphinarium attack, Israeli Prime Minister Ehud Barak, joined by US President Bill Clinton, had made a strenuous effort to persuade Arafat to accept a far-reaching, two-state deal.

Arafat did not agree to the proposal on the table, nor did he make a counter offer. In fact, he instead chose to unleash a second intifada, which eventually killed over 1,000 Israelis (in U.S. population terms, about 30,000 people, or ten times the number of victims on 9/11) in pizzerias, buses, Passover Seders, cafés — and, yes, discotheques.

Clinton wrote about Arafat’s rejection in his autobiography, My Life. Here’s an excerpt: “Arafat: ‘You are a great man.’ Clinton: ‘I am not a great man. I am a failure, and you have made me one.’”

Hamas just fired more than 3,600 rockets at Israel in the span of just 11 days. The aim, like that of the Hamas suicide bomber dispatched to Israel in June 2001, was to murder as many people as possible.

Pro-Palestinian voices rushed to assail, indeed slander, Israel for the “audacity” of defending itself, for an “unfair fight” because Israel developed an anti-missile system, for claims of indiscriminate bombing in Gaza, and for triggering the conflict because of longstanding legal battles over housing in eastern Jerusalem.

In doing so, they conveniently dropped the word “Hamas” from their tweets, posts, memes, opeds, and interviews, instead trying to recast the conflict as between an aggressive Israel and the defenseless Palestinian people. After all, it becomes a lot more complicated to mention Hamas by name, since it is a well-armed terrorist organization, so best to simply pretend it’s not a major factor.

But It was indeed a conflict launched by Hamas, and, of course, not for the first time, either.

After all, to repeat, its declared goal is Israel’s end, so claims about the absence of a two-state solution or a housing struggle involving four families ring hollow. Hamas couldn’t give two hoots about either.

Yet Hamas can count on a network of journalists, diplomats, celebrities, and think tankers all too ready to find a way to mask the true nature of its nefarious deeds, both in Gaza itself and against Israel. Instead, they try to redefine the protagonists, the circumstances, and the facts on the ground to pin all the blame on their much-despised Israel.

Twenty-one young people were murdered by a Hamas terrorist two decades ago. They cannot be brought back to life, but the hope in such cases is that, as the expression goes, “they did not die in vain.”

Yes, Israelis are still dancing and still living in their home, and thankfully so.

But it seems there’s no more understanding or, worse, concern among many today about what Hamas actually is than there was that unforgettable Friday evening in 2001.