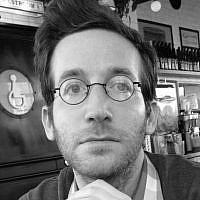 The Blogs
Amit Naor
Apply for a Blog
Please note that the posts on The Blogs are contributed by third parties. The opinions, facts and any media content in them are presented solely by the authors, and neither The Times of Israel nor its partners assume any responsibility for them. Please contact us in case of abuse. In case of abuse,
Report this post. 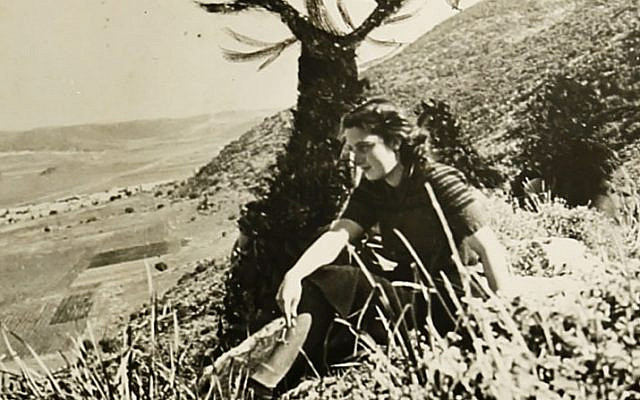 From the Hannah Senesh Collection, at the National Library of Israel.

Even before she learned to write herself, she composed poems and stories. When she was a teenager, she was accepted to the literary council of her prestigious school (though she was forced her to give up her place due to anti-Semitism). From the moment she arrived in Mandatory Palestine, she wrote — first in Hungarian and then, very quickly, in Hebrew, as well. She even continued writing when she returned to European soil, after embarking on the parachute mission from which she never returned. In fact, Senesh continued writing until her final moments. She even wrote a poem while being held in her prison cell.

The Hannah Senesh Collection at the National Library of Israel preserves the very last lines Senesh wrote in her lifetime. Following her execution, a tiny, brief note was found in her dress, written in Hungarian. It was addressed to her mother, Katherine, as Hannah, who never stopped writing her whole life, finally chose to emphasize the value of silence:

Dear mother, I don’t know what to tell you. I will only say this: A thousand thanks and more, and forgive me, if you can. After all, you will understand, better than anyone else, that words are not necessary now. With great love, your daughter. 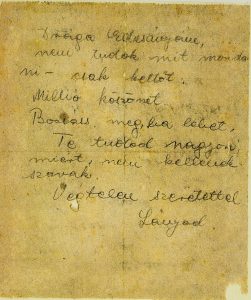 The last note written by Hannah Senesh. It was found in her dress following her execution. (The Hannah Senesh Collection at the National Library of Israel)

This was not the only note or letter that Hannah wrote while in Europe. Senesh left Palestine in January 1944. In March, she was flown to Italy, and shortly afterwards parachuted into Yugoslavia, into the heart of enemy territory. She wandered among the local partisan forces for about three months, waiting for an opportunity to continue her mission and infiltrate the country of her birth, Hungary. At the beginning of June 1944, the mission commanders thought the time had come — but Senesh was captured the same day, shortly after crossing the border. Charged with espionage, she spent the final five months of her life, until her execution, in prison. 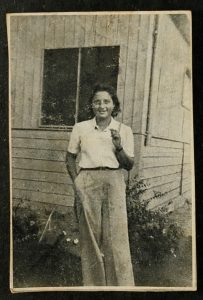 Over the years, stories have surfaced about what she managed to write during her months with the partisans and even during her imprisonment. One of these is the story of “Blessed Is the Match,” one of Senesh’s best-known poems. Senesh passed the note on which she wrote the four-line poem to her comrade Reuven Dafni, just before crossing into Hungary.

Dafni recounted how she asked him to take the note in case she did not return from the mission, and how he threw it away, saying there was no chance she would not return. Fortunately, he went back to retrieve it. How exactly it made its way to Israel we do not know, but this is one of her last poems. The original note in Senesh’s handwriting is held at Kibbutz Lohamei Hageta’ot. 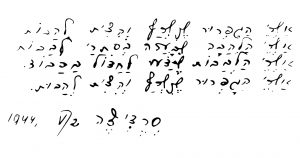 The original handwritten Hebrew manuscript of ‘Blessed is the Match’ (Ashrei HaGafrur), by Hannah Senesh.

In November 2020, the Senesh family decided to deposit the Hannah Senesh Collection in the National Library of Israel. The collection includes several more notes and letters that Senesh wrote after leaving the country for her dangerous mission. Among these are two notes that Senesh sent to her mother Katherine and her brother Giora (George) on March 13, 1944, two days before her jump. The two small notes were written in pencil in Hungarian. Senesh wrote to her mother, who was still in Budapest at the time:

My dear mother, in a few days I will be so close to you, yet at once also far away. Please forgive me and try to understand me. A million hugs. Anna.

She wrote the date at the bottom. On the back she wrote in Hebrew “To mother” and signed with her codename, Hagar. 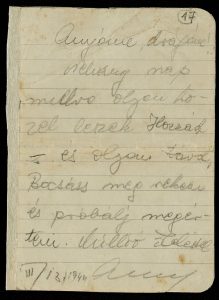 The note Hannah Senesh wrote to her mother Katherine, mere days before her parachute jump. (The Hannah Senesh Collection at the National Library of Israel)

These notes, along with other letters sent by Senesh during her time in Europe, form a sort of path by which we can trace the events of her final days, during her dangerous mission in Europe. Brief regards, a plea for forgiveness, even poems -– Hannah Senesh wrote all of these during the last months of her life, until the very last moment.

The above is part of the complete literary estate of Hannah Senesh, now the Hannah Senesh Collection at the National Library of Israel. The collection includes: diaries, family correspondence, photographs, a newspaper she edited at the age of 6, notebooks, personal items, and two notes found in her dress following her execution: her last song and a letter to her mother. Some of these materials have been unpublished thus far, and they will now be preserved, digitized, and eventually open to the general and scholarly publics for the first time.

About the Author
Amit Naor, an avid history fan, and Israeli history in particular. Likes practically anything about pop culture, sports, and politics. Married to Ma’ayan, father to Itamar, and the one who keeps Juno the cat from starving.
Related Topics
Related Posts
Comments