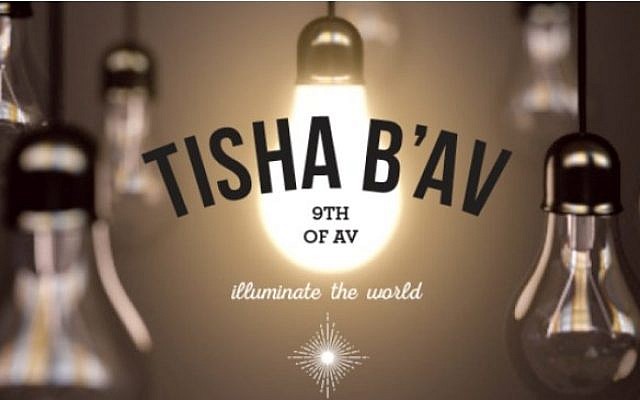 We are in the days leading up to the most somber in the Jewish calendar.

A wise young person in my synagogue told me: Now we are in the bad days. I told him: No, there are no bad days. There are bitter days. There is a time for complaining, for saying that not all is OK, for crying. But even when we’re crying, we don’t need to be down or depressed. We can be happy to cry, to acknowledge feelings that are not so nice, to get some out of our system, to be real.

You would cry too if it happened to you.

The rabbis have instituted all kinds of restrictions of things that make Jews feel not so good for the three weeks before the Ninth of Av. In fact, there is a great number of things we refrain from or diminish, but as always, we try to be wise and not go overboard.

The restrictions grow from modest to serious the closer we get to the commemoration of the Temples’ Destruction. There are general prohibitions for the Three Weeks. Then there are more restrictions in the Nine Days, including the last Shabbat before, Shabbat Chazon. The day before, we have even more no-nos. Until midday on the day itself is the gravest climate and from then on we start relaxing our sadness a bit. This all is to feel and express our sense of mourning and longing for better days ahead.

Because when we lose a loved one, Heaven forbid, we don’t need gimmicks to feel our loss. But for the old mourning, we need help to permit us to feel what we are lacking and to get into the sad mood.

I grew up as an 11th generation Dutch Jew. The Netherlands has a culture of depression. The small number of sun hours probably helps and the cultural and religious roots of Calvinism no less. The ultra-Dutch great psychiatrist Professor Dr. P. C. Kuiper once said: What is depression? A sort of common cold of the brain. Almost everyone around you has it.

Besides that, I was a child of two Holocaust survivors who maintained themselves without ever getting an hour of therapy in a country that let 75% of its Jews get murdered. What was my chance of ever being happy?

As a young child, I must have concluded that there is only one way for me to survive and that is by being happy. (Many people set stipulations that when fulfilled supposedly would “make them” happy. My happiness though is without preconditions. Just lift up these corners of your mouth and see life with an optimistic bent!) My mother originally had a happy nature – a bit overshadowed by the genocide of her family, friends and community – so I must have borrowed from her.) Since the age of 11, everyone knows me as happy-go-lucky, joking and friendly. Maybe once every 18 months I suddenly get somber for a day or two and I always assume that that is necessary to feel and I won’t push it aside.

Now, being so happy – thank G^d – has many positive side-effects. I remember one of my young kids saying: I’m always happy. Then I asked: So what would you do at a mourners’ meeting? He replied: Then I’ll be happy “in my mind” (literally “in my heart,” Hebrew for: on the inside).

One of the things I pondered for years was that the Talmud says that: When we enter the Month of Adar, we enlarge happiness. How could I? I finally found a solution: It doesn’t say “our happiness.” I can make an effort to make even more people happy than the rest of the year.

Yet, this doesn’t work for: When we enter the Month of Av, we diminish happiness. I can’t do that by making more people sour-faced.

But now I also have a new idea about how to tackle that.

The whole idea of diminishing happiness for Av is to realize what’s wrong, not to pretend things are wrong. I can make others become more aware of what’s wrong. How?

The rabbis teach us that in the future, the Ninth of Av will become a Jewish Holiday. As soon as we all give up on our hatred for each other (before the Gentiles stop hating us), we will celebrate the return of the Temple and the Messiah – who per tradition will be born on Av 9th. We’re a week away but it can still happen. It can even happen last minute. So, I have an idea how to help other people feel their depressed side more. I’ll wish them this week and Shabbat: a Happy upcoming Holiday.

I’ve started doing this already. Most people didn’t notice the words of my blessing. My extra-bright “Chag Sameiach” was just answered with “Have a good week.” I’m on it and we’ll see how it will develop.

Realizing how far we are from where we should be should be the fastest road to getting where we should be. When we give up on pretending that all is fine, we can finally make things fine. As the Sages say: Those who mourn for Jerusalem[‘s Temple] will merit seeing its rebuilding.

May we all learn to love and like each other and welcome the greatest era ever for all people, speedily and in our days! Happy Holiday to all!