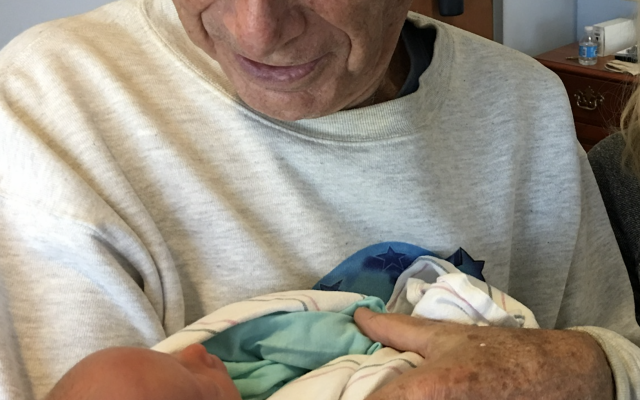 Effective parenting, they say, involves consistent modeling. In that case, my Abba’s “World’s Best Dad” coffee mug brimmed with truth. He modeled characteristics that I can only hope to model for my sons.

Some of these traits have proven unattainable. Take, for instance, my Abba’s athleticism. As a young adult, he played semi-professional soccer in 1960s Israel. A versatile left winger, he passed the ball with precision, pickpocketed opposing dribblers, and, when called upon, attempted and sometimes scored sneaky goals. I, on the other hand, warmed the bench for my Crystal River (Fla.) High School’s unranked team. Coach kept me on the roster believing I was European. He held out hope that raw talent tucked away in my DNA would one day kick in. It remained dormant.

During my teenage years, I was far more concerned with inheriting another, more vital attribute from my Abba: his natural cool. He got paid to spend summers on the beach as a lifeguard, built a singular Israeli collection of African American gospel albums by the likes of the Golden Gate Quartet just because he dug their energy, taught himself how to program mainframe computers, and, when IBM opened a Tel Aviv branch in the 1970s, persuaded Big Blue to give him a shot. What really blew my nerdish mind, though, was learning that this secular Tel Avivian wooed a beautiful Hasidic woman who lived in the ultra-Orthodox, uber-insulated city of Bnei Brak. I couldn’t even get up the nerve to ask a friendly classmate to the prom. I fumbled for words when a pom-pom girl invited me to sit by her on the school bus. Afterwards, when I asked my Abba for a couple of readymade pickup lines, he suggested I develop my listening skills, instead. It was great advice, career-wise. It helped me hone my interviewing skills and cultivate sources. But I’ve obtained no semblance of coolness.

As I became a young adult, I wished to acquire another quality from my Abba: his genuine humbleness. He never sought attention. When he found himself under a limelight, he slipped away, shining it on others. He cracked us up without ever insulting anyone. He made everyone feel special. And he boasted only about his wife (yes, that Bnei Brak hottie), three children, and twin grandkids. In contrast, I’ve bragged about each tiny accomplishment. You’ll find the embarrassing breadcrumbs of my so-called achievements all over social media. But what I really enjoyed was sharing them with my father. Nothing—no job offer, no graduate-school admission, no wedding engagement—became official until I updated him. His nonjudgmental approvals and Duchene smiles stamped my life’s passport.

No more. Dan Dvir passed away Nov. 20, 2020. He was 80. He was born in 1940, when hope faded as the Nazis blitzkrieged the West, the Japanese terrorized the East, and the Americans stayed out of the Second World War. He died in 2020 as hope returned when pharmaceutical companies announced 95-percent effective COVID-19 vaccines, the media declared Joe Biden president-elected and Kamala Harris the first woman and the first person of color vice president, and his beloved University of Florida football team finally beat its biggest rival, Georgia. He battled three cancers and fought in three wars. During the 1967 Six Day War, his wife of one year was weeks away from birthing their first child (me). After the 1973 Yom Kippur War, he brought me Kaveret’s debut album.

In the following years, I played “Poogy Tales” whenever I missed my Abba. I’d place it on our record player, drop the needle, and listen to the A-side from first to last note. Then I’d flip over the vinyl and immerse myself in the B-side. I’d chuckle (these musical artists weaved clever lyrics into their catchy melodies), hum along, and think about my super-cool Abba.

Although I’ve given up on being cool, athletic, or deeply humble, I’m still working on gaining my father’s best attributes: his tangible caring and universal kindness. He always treated everyone as equal. When my brother came out during the early 1980s, our Abba immediately made it a non-issue. “Just be yourself,” he told Sha’ron, who was 15 at the time. “Be safe, be happy, be healthy, and be yourself. We love and support you unconditionally.” When my mother spent months in the hospital in late 2019 and the beginning of 2020, her Tel Avivian husband was there every gut-wrenching step of the way. He slept on a chair by her bed. When she returned home—extremely fragile after a turbulent feat of survival—he took care of her 24/7. It energized him, filling his mind and heart with a greater sense of purpose. It elevated their marriage to new heights. His wife’s appreciation grew and grew until it overflowed. Their love deepened and matured with it.

He left us soon after she regained her independence.

Abba: I hope to be as caring and kind as you. I must model these traits for your grandsons.

Maybe your grandsons will also be cool, athletic and humble, like you. It’s in their DNA.