It all started when CNN aired a piece about Haredi Jews in Israel. Rabbi Avi Shafran, Agudath Israel of America’s director of Public Affairs wrote to defend that community against what he felt to be an errant smear. In this defense, Rabbi Shafran made a number of inaccurate and false claims about the situation in Israel and the Haredi community’s part in it. He depicted the Haredi community and politicians here as being simply ‘live and let live.’

As a resident of Beit Shemesh on the front lines of religious extremism, I felt that Rabbi Shafran’s claims cried out for a response, so I wrote, trying to depict the reality here, since his description was so very off the mark.

Rabbi Shafran then wrote again. In this new piece, he attempted to dismiss and discredit me, and once again insisted that the extremism I decry isn’t really there, and if it is, it is a minority within a minority. Instead of dealing with a real problem and issue, he chose instead to deflect and deny.

(This all went down in The Forward, where Rabbi Shafran responded to the CNN piece.)

It was at this point that other residents of Beit Shemesh had had enough. Rabbi Natan Slifkin wrote an excellent rebuttal of Rabbi Shafran’s piece and Amanda Bradley did as well. Each cover different points and I suggest reading them if you want an even more robust understanding of Haredi extremism here. 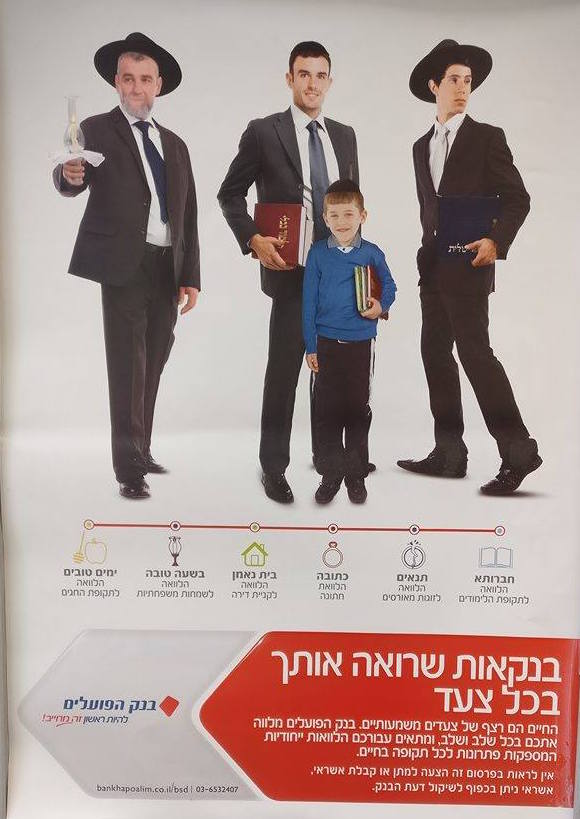 Bank Hapoalom: With you every step of the way… with no women

Left to my own devices, I would not have responded to Rabbi Shafran again. Being branded a liar and anti-Haredi by those who don’t like my writing against extremism is not new to me. But too many people who live in Beit Shemesh and see what goes on here felt that I could not let his dismissal of the situation stand. And so, here I am.

An advert for a class for mothers… with a father depicted.

Public billboards, bank walls and health clinics are not under the auspices of the Haredim. I speak of public institutions and their printed materials, which are increasingly being swept up in the unholy tide of vanishing women. The phenomenon is growing and getting far worse.

Rabbi Shafran’s claim that: “Many haredi publications, in the interest of the Jewish idea of modesty, have always refrained from including photos of women,” is wrong. Only the most extreme publications had that practice. 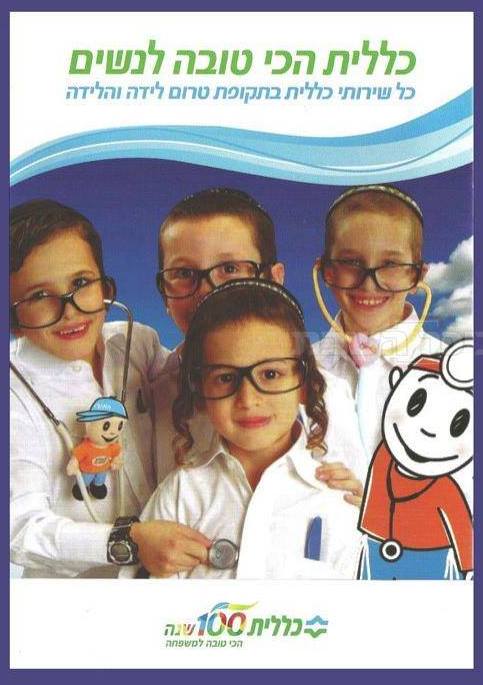 “Clalit: The best for women” A health clinic brochure for women about maternity care and birth… with boys.

A program by Hadrei Hadarim (a Haredi media outlet) investigates this exact question.

Even if your Hebrew is minimal, watch from 1:12 where the interviewer asks: Was this always the case? (that women were absent from Haredi media?) “The answer is an absolute No.” and shows images to prove it.

Rabbi Shafran calls me intolerant for not tolerating censorship of women. But I’ve written extensively about the damage it does to Jewish communities. Even if he is okay with the chaos created when men cannot interact normally with women and when girls are left with no positive images to relate to, Rabbi Shafran is ignoring the violence that comes when Haredi leadership enforces the illegal “no women” ban.

Here, in Ramat Beit Shemesh, when a local businessman attempted to create an ad booklet with modest images of families and men and women, he was boycotted, the deliverers harassed and physically assaulted. The booklet’s producer was pressured intensely to remove all images of women and girls. Threats both open and veiled were made. Those who joined and justified the boycott were American Haredim, those you would call “moderate.” They called the advertisers and pressured them to pull out telling them they would not patronize them if they advertised there. They justified their actions as “daas Torah.”

About the Orot Banot girls school outbreak in 2011, when extremists harassed girls at their school on a regular basis, Rabbi Shafran claims that: “Many are the respected yeshiva heads and scholars who have made clear that violence of the sort Ramat Beit Shemesh experienced six years ago is indefensible.”

Really? We here in Beit Shemesh must have somehow missed those vociferous and varied condemnations. Here, we were treated to many private and one very public refusal by rabbis to condemn the violence. The below quote is just part of a long and painful letter the rabbi wrote explaining his refusal to help. 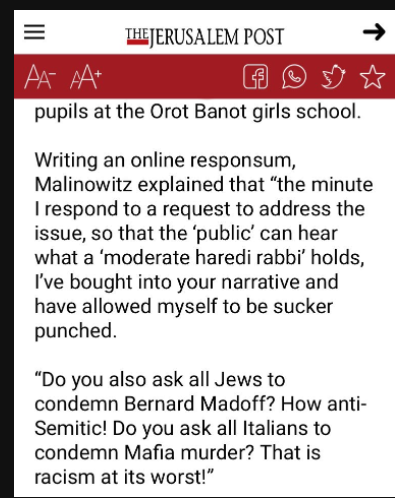 After being refused assistance by the community and politicians, there was no choice but to go to the media. And of course, we were widely condemned by the haredi community for doing so. So, which is it, Rabbi? Shall we go to the media to prove that what we are saying is true or should we continue the pointless exercise of begging the leaders and politicians to help us?

As I told Rabbi Shafran when he asked me, the current incidents of the harassment of teenage girls occur on Shabbat, so I have no video. Moreover, the residents of Beit Shemesh are trying very hard to solve the issue outside of the media, via police and politicians — thus, I suggested that he contact the police for the police report to verify the story as well.

When one of the local women saw Rabbi Shafran’s questioning of the incidents, she offered to speak to him directly about what she and her daughter have experienced. The offer stands.

But most shocking of all that Rabbi Shafran writes is the question he asks rhetorically. “Are religious Zionists to be expected to condemn every outrage committed by a “hilltop youth?” YES, Rabbi Shafran. YES they are! That is what it means to be a moral and responsible person.

I wrote these words on Yom Hashoah and this is the number one lesson that I have taken from the Holocaust. Not that people hate us, not that we must circle the wagons, not that we should make excuses for extremism and say it’s only a few crazies, but that when people do bad things, it is our moral and religious obligation to stand against them — every time. I honestly cannot believe this is something I need to explain to a rabbi.

I invite Rabbi Shafran to come and spend some time in Beit Shemesh since he appears not to believe its residents. He will see children tearing Israeli flags off cars, soldiers being physically attacked and called Nazis, and young boys with payot calling Jewish mothers ‘shiksas’.

Come ride the Number 11 bus and you can hear Jewish men telling Jewish women and girls to go to the back of the bus. This is the next generation of Haredi Jews here, Rabbi. Our town is the canary in the coal mine of Jewish extremism. That you care more about the reputation of your community than its actual health and future says more about its decay than any additional evidence I might bring.