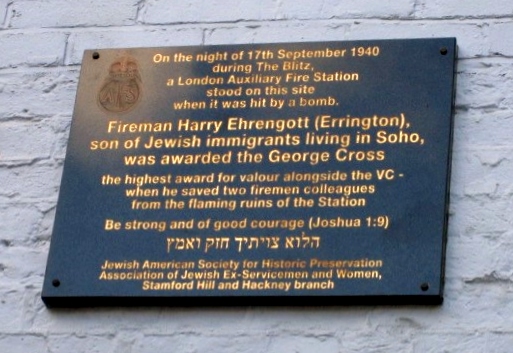 An unusual partnership between a Brit, Martin Sugarman representing the Association of Jewish Ex-Servicemen and Women (AJEX), and myself as an American Jew, on behalf of the Jewish American Society for Historic Preservation (JASHP), was formed. Together, we are fighting anti-Semitism by placing historical markers remembering and honoring British Jewish heroes of WWII.  Together we are giving the symbolic middle finger salute to the dogs of hate that claim British Jews were cowards, shirkers, and refused to do their parts for the U.K. when danger was near.

For Sugarman, the effort is obvious, fight the rising tide of anti-Semitism in the U.K. For JASHP, it is less obvious.  Anti-Semitism is an international disease that easily jumps borders and kills.

November 3, 2020, on an obscure street in London, #29 Rathbone place, not far from the British Museum, a unique, permanent stone memorial to London Volunteer Fire Fighter Harry Errington was placed.  It is sited above a building’s entrance doorway. It will be discovered, over and over again, as the years roll by in the future.  It is the first of a series of historical markers reflecting upon Jewish patriotic service and courage.

Harry Errington is the only Fireman in London to have won the George Cross.  The George Cross is the equivalent of the American Congressional Medal of Honor granted to civilians. It is only awarded for “acts of the greatest heroism or for most conspicuous courage in circumstance of extreme danger”.

September 1, 1939, World War II began with Germany invading Poland from the West while Communist Russia invaded Poland from the East.  Poland had little chance despite Britain declaring War on Germany.  Britain was in no position to help significantly.  Poland fell and doomed its 3,000,000 Jews soon under full Nazi control to their fates.

A year later, Germany conquered the Low Countries, the British European land army escaped from Dunkirk and France was defeated.

July 1940, the Germans began an air war, the Battle of Britain, to destroy the British ability to fight and resist their planned land invasion of the United Kingdom.

Incredibly, though seriously under strength to match the German onslaught of the air war, the British prevailed.  Winston Churchill said of the British fighter pilots who defeated Germany in the Battle of Britain, “Never has no much been owed by so many to so few.”

The German plans to defeat Britain in the air was defeated. Germany changed tactics. It had released a new horrible type of warfare they perfected in the Spanish Civil War.  Air Marshal Goering convinced Hitler of his ability to bring Britain to her knees by mass bombing, destruction, and terror bombing of Britain’s civilian population.

From September 1940 until May 1941, for eight months and five days, Germany did not focus on military targets but civilian ones.  Germany planned to defeat Britain by terror, horror, and death of its cities, with a special focus on London.

Day after day, heavy bombing missions targeted British cities.  Germany rained death from the air to create havoc, break the British will to resist by killing its population in a cold campaign of terror and fire.

British air defenses paid a heavy price, but the Germans paid a much higher price.  The German Blitz failed.

One of the reasons it failed was because the British will to resist never broke and a remarkable small group of courageous men and women on the ground who would not bow before Germany raining death from the air.  The small group of British Men and Women were the Firefighters.  Fire and destruction were everywhere on the ground but so were the Fire Fighters putting out the fires and saving lives at incredible risk to themselves.

One of the Firefighters was Harry Errington.

Harry Errington, the family Anglicized their last name when they immigrated to Britain in the first decade of the 20th century from Lublin, Poland.  Their name had been Ehrengott.  They were Polish Jews escaping the never-ending anti-Semitism of Poland for a better life in England.  They settled in Westminster, London.  Harry’s father was a tailor.

At a young age, he was apprenticed to be an engraver.  Working with nitric acid damaged his lungs.  He returned to his father’s trade as a tailor.

When the War broke out, Harry volunteered for the army.  He was rejected because of his damaged lungs.  Harry refused not to be able to do his part for Britain. He stepped forward and became an Auxiliary Volunteer Firefighter.

September 17, 1940, Harry and nine of his fellow Firefighters were in the basement of an Auxiliary Fire Station as death rained from the sky.  His building took a direct hit, a bomb crashing through the upper floors to explode spraying death everywhere.  The building turned in a burning hell of heat, fire, gas, smoke, and death.  Seven Firemen were killed.

Through the thick, nearly impenetrable smoke and blazing materials all about him, Harry had survived.  He saw two of his fellow Firefighters injured and trapped in the blazing debris. With superhuman strength and determination, he freed one of his injured comrades and carried him through the conflagration of assured death to safety outside the building.

Despite all self-evident logic and the natural human instinct to save his own life, he plunged back into the burning, collapsing building making his way to the basement to find his second comrade trapped under burning debris.  Harry pushed himself through the fire, seriously burning himself. He managed to lift the flaming debris from the Firefighter.

Despite being horrifically burned, his hands and arms were nearly burned to pieces, Harry carried his fellow Firefighter out of the collapsing building to safety outside.

Throughout the Blitz in London, many acts of heroism and selflessness were recorded, none approached the actions of Harry Errington that night.  300 London Firefighters died during the Blitz.  The two Harry saved lived.

King George VI, in a special ceremony, publicly presented the George Cross to Errington six weeks later.  He would be the only London Firefighter to be awarded the distinguished medal during the War.

After the War, Harry returned to his career as a tailor.  My first cousin, Gordon, used to see him at Shabbat Services at the London shul they attended together. He said Harry was a distinguished, gentleman who never made a big deal about what he did for his country and British Jewry.

Harry died December 15, 2004.  Every major paper in London carried his obituary with honor and respect.  Half of them did not mention he was a British Jew.

November 3, 2020, a historical marker telling Harry’s story and specifically recognizing his Jewish identity, was placed at the site of the long-ago destroyed Auxiliary Fireman’s Station on Rathbone Street.

The stone engraved marker reads aside the badge of the Auxiliary Fire Service:

On the night of 17th September 1940, at `Jackson and Allum’ garage – which stood directly on this site

‘Be strong and of good courage’