Early in my time living in Israel, I had a young Ulpan tutor who was always on me about my kippah. “How can you wear that?” this young woman from a left-leaning kibbutz demanded. “Don’t you know what that means?” 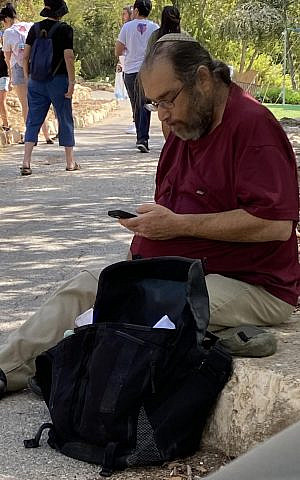 Me, complete with kippah and beard, checking my phone.

It was a ton of fun to argue with her about this in Hebrew, so fun to be able to debate about things I actually cared about with another intelligent person, instead of just engaging in the usual stilted Ulpan exercises.

She never mentioned Ben-Gvir I don’t think, but that was what she was telling me: Don’t you know that you, with your knitted kippah and your beard, are wearing the uniform of the likes of Ben-Gvir? That you are standing for the occupation? For the oppression of Palestinians? For the oppression and demonizing of LGBTQ people?

I almost wanted to laugh. How could anyone think that of me? Of liberal me? “My kippah stands for my relationship with God,” I would tell her. “That’s not something I want to hide, or to be embarrassed about.”

But am I embarrassed now? I don’t know a lot about Ben-Gvir. And I’m not going to repeat the oft-told tale of what he did with a car-hood ornament once, an act that at least symbolically connects him with the murder of a prime minister 27 years ago this past Shabbat. But I know that the Ben-Gvir of today is a professional provocateur. I know that he loves to be involved in things and places that Muslims hold dear, including the Temple Mount. For millennia, Jewish sages, including the most Orthodox of the Orthodox, have held that it is forbidden to visit the Temple Mount lest one accidentally enter the area of the Holy of Holies.

Secular Jews have not always followed this religious law, and, since Israel took possession of the Mount, in the ‘67 war, many Jews have been to visit, just as tourists from all over the world do. But Ben-Gvir is part of a new religious movement that holds that not only should religious Jews be able to visit the Mount, but they should be able to hold prayer services there.

What’s wrong with prayer, you might ask. Isn’t that harmless?

But it’s not. And Ben-Gvir knows it. He knows this is the Middle East. He knows that Palestinians will see his visits and those of his prayer-seeking supporters as a kind of raised middle finger: “I am here, we are the owners, Israel is the owner of the Temple Mount. It is time that we prove it to them,” he said while visiting the Mount on Tisha B’Av, the Jerusalem Post reports.

And this is the center of where I differ with the likes of Ben-Gvir. I wear a knitted kippah, too. I too believe in the supreme nature of the Blessed Holy One, and in the Holy One’s unique and special relationship with Israel. But, I do not believe that we Jews are the only ones. The Muslims, the Christians, the Buddhists — all the peoples and faiths of the world — have their own unique and special relationships with the Holy. And, while it’s no easier for us to share than it is for my two beautiful young children, or it was for Cain and Abel, we must share. The Holy One demands it. Because the Holy One loves — commands! — peace, Shalom, above all.

Is it fair the way things are now, where the Muslims have greater access than Jews do, where they get to have a great Mosque up there and we have no permanent religious presence? Maybe not. But our Sages were wise when they told us that we are not to go up there. They gave the most religious of us Jews a path, a doorway, to peace, to finding a clear path to sharing the things we find most holy. The Western Wall, the Kotel, is justly ours, and I am thankful we won full access to it in 1967. But the platform above, what Muslims prefer to call The Noble Sanctuary, should be in Muslim hands, policed by Muslim authorities and not the sons and daughters of Israel serving in the IDF. Every attempt at a peace agreement under the Oslo Accords has recognized that this division — this mode of sharing of holy spaces — is the beginning of any path towards peace.

But Ben-Gvir does not see things this way. Peace, true peace, does not interest him. Only the assertion of Israeli power through force and intimidation. The closest thing to peace for him is seeing the Palestinians beaten into meek submission. The key to his success is that he’s been able to hoodwink many Israelis into thinking this kind of violence-focused plan is an effective way of achieving the security and “quiet” that we Israelis so desperately desire, instead of walking the path towards true peace.

What will people see when I go out into my Jerusalem neighborhood, a neighborhood where many Muslims come to work and shop? Will they see a man who hates Arabs, who desires their expulsion and maybe their death? Is that what the many Arab doctors and nurses and pharmacists who care for me will see?

I pray to the Holy One that this is not true, that Ben-Gvir has not successfully stolen from me the pride in my religious identity that I once expressed to my young Ulpan teacher. But I am not sure. A part of me has been broken since last Tuesday’s election. All my adult life, I’ve read the news in depth every day. I’ve had lots of friends — especially since Donald Trump was elected in 2016 — say they just can’t look at the news anymore. In that, I, as a chaplain, have heard a cry of pain. I’ve tried to gently counsel them spiritually, to help them find the strength to re-engage with the world.

Now maybe I’m the one in need of spiritual help. I’ve had to force myself to read the news since last Tuesday. In a sense, Ben-Gvir has defeated me. This is what the forces of reaction and hate want, to discourage their opponents, and make them want to hide instead of engaging with the world. Instead of trying to improve it. They want us to feel helpless.

But I won’t do it. I don’t yet know how I will pull myself out of this hole. I remind myself that it hasn’t even been a week yet. I lift my eyes up to the hills and hope to see new leadership, or at least new energy and new ideas from old leadership. We’ve been in dark places before. This is a beautiful country full of beautiful people, few of whom truly want war. I saw the Berlin Wall fall in my lifetime, and that outcome had always seemed far beyond any hope for the peoples of Eastern Europe.

Maybe there is hope for us too.

About the Author
Alan Abrams is a spiritual care educator who made Aliyah in 2014. He and his wife live in Jerusalem with their two "sabra" children. Alan is the founder of HavLi and the HaKen Institute, spiritual care education and research centers based in Jerusalem. A rabbi, Alan received a PhD in May 2019 from NYU for his dissertation on the theology of pastoral care. He was a business journalist in his first career.
Related Topics
Related Posts