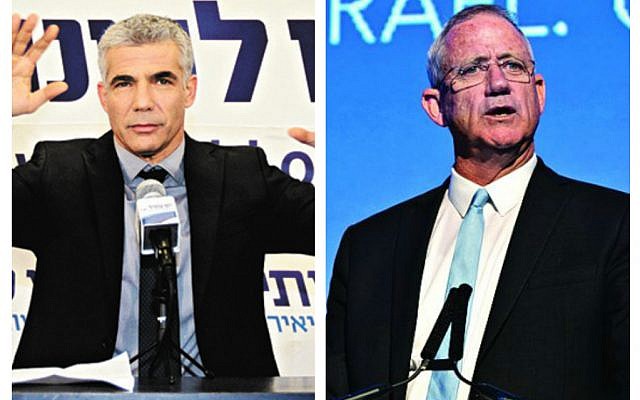 When the Attorney General announced his intention to indict Benjamin Netanyahu on 28 February, the newly formed Blue and White party of Benny Gantz and Yair Lapid started soaring in the polls. Opponents of Netanyahu got giddy with excitement as the Blue and White party was predicted to win 37 seats, beating Likud into second place with 31 seats. Some polls predicted the centre left bloc would be able to form a government or at least prevent the formation of a right-wing coalition.

But a more sober analysis of all of last week’s polls by BICOM concluded that the right-wing bloc led by Likud would still be able to form a coalition with a wafer-thin majority of 61. Even though Blue and White was predicted to win 37 seats it is the strength of the smaller parties that look likely to determine who next governs Israel. So far, the parties on the right and the ultra-orthodox are predicted to win more seats than the Arab parties and those on the centre-left.

If Benny Gantz and Yair Lapid are to have any chance of leading the next Government they have to win by a significant margin in order to offset the relative weakness of their potential allies on the centre-left. So the real question is, were those 37 predicted seats just a bubble that will burst? Clearly the test for any sudden and dramatic shift in the polls is whether it is sustained over time. Two polls this week conclude that the party’s support has decreased to 31 seats with Likud on 28. Much of this change is explained by increased support for smaller, largely right-wing parties that were previously predicted not to make it into the Knesset. The overall prediction is that Likud could form a new coalition with a majority of 64. If that is repeated in more polls then it starts to look like a trend.

How has this happened? Firstly, it’s important to note that polls are not exact predictions. They are an indication of likely support with significant margins of error. The support for smaller parties naturally fluctuates a great deal and a prediction as to whether or not they will make it into the Knesset with 4 seats is itself within the margin of error. Yisrael Beitenu leader Avigdor Lieberman even complained this week that the polls are showing he won’t make it into the next Knesset largely because many of the polls don’t ask about support for his party.

Polls have consistently predicted that the Likud will win between 28 and 32 seats so it is reasonable to assume that that support is quite solid and they are likely to win close to that amount of seats. The prediction for Blue and White is much flakier. It rests on a support base for Yesh Atid, between 10 and 12 seats in polls before the merger, and a much larger and volatile group of floating voters who have migrated from other parties on the right and the left. Their support is by no means secure and it will ebb and flow in the next three weeks. Some of these floating voters may even float back to parties they have supported in the past.

If the polls predict a dead heat then the final result could be decided by a last ditch battle determined by who has the better ground game to get out the vote. As an established party with a nationwide operation, Likud have a distinct advantage in this field. The ultra-orthodox parties also have tried and tested means to get their followers to the polling stations, even if their aging leadership are losing their lustre. Yesh Atid have a solid party machine to contribute to the Blue and White effort. The presence of Histadrut leader Avi Nissenkorn on the Blue and White party list allows them to benefit from his national network of activists, but beyond that there is little else. This is unsurprising, the party has existed for three weeks and Benny Gantz only announced his candidacy on 29 January. This left little time to build the kind of infrastructure and volunteer network required to generate support and ensure it translates into actual votes on 9 April.

In the final week of March both Benny Gantz and Benjamin Netanyahu will travel to Washington to address the AIPAC Policy Conference. For Bibi this is a familiar crowd who will greet him with rapturous applause. For Gantz this is a gamble on a field where he can’t compete. While Bibi gets a bear hug from President Trump in the White House, Gantz will have to make do with low profile meetings in more mundane places on Capitol Hill. There is even a rumour that in a cunning coup de grace, Trump will give Bibi a last-minute boost by formally recognising Israeli sovereignty on the Golan Heights. That would be an unprecedented reversal of decades of US policy and condemned as a transparent intervention in the Israeli election, which is exactly why Trump may just do it.