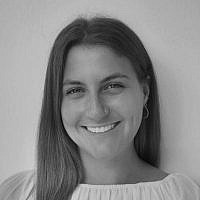 The Blogs
Alissa Abrahami
Apply for a Blog
Please note that the posts on The Blogs are contributed by third parties. The opinions, facts and any media content in them are presented solely by the authors, and neither The Times of Israel nor its partners assume any responsibility for them. Please contact us in case of abuse. In case of abuse,
Report this post.

Israel just experienced yet another round of escalated violence with its Palestinian neighbours. Regardless of whether this round of violence stemmed from the Arab-populated areas of Sheikh Jarrah or Silwan, the mixed cities of Lod or Bat Yam, or the controversial Jerusalem or Gaza, everyone, everywhere, had an opinion to voice. Many Americans, celebrities and common folk alike, have taken to every imaginable social media platform available to spew their grievances against Israel, justified or not. Unfortunately, to the dismay of these social media warriors, their Instagram story or tweet isn’t going to change America’s foreign policy toward Israel, for one reason and one reason only: American self- interest.

American-Israeli relations are based on bilateral cooperation, founded not on shared democratic values and ideology, but rather on the tangible interests of both states. No matter how many times the Hadid sisters post about freeing Palestine, these tangible interests aren’t going away. Since 1949, the United States has provided Israel with over 115 billion dollars. Its military, economic, and diplomatic support will continue to come our way, because America will continue to benefit from its alliance with its closest partner in the Middle East: the Jewish state.

Israel continues to be America’s right-hand man in dealing with traditional security threats and unconventional warfare, be it fighting terrorism, political Islam, violent extremism, nuclear proliferation, covert operations, or cybersecurity. America’s “War on Terror ” might be over, but in Israel it is still our contemporary reality. Yet, homeland security still remains one of the most important issues to American voters, and one in which Israel continues to shape, through its military experience and technology. That’s why, by law, U.S arms sales cannot adversely affect Israel’s qualitative military edge. The face of modern warfare is quickly changing and adapting, and Israel has transformed and adapted accordingly with its development of cutting-edge technologies. To America’s great benefit, due to their close relations and support to Israel, they are second in line to receive these modern weapons technologies, not to mention the slew of civilian technologies and booming high-tech industry. Israeli technology is going straight into the hands of the American people, and is fostering economic competitiveness, creating jobs for Americans, and helping America gain food, energy and water security. Israeli civil and military technology is unmatched by any other country, which America is well aware of.

Let’s also not forget how Israel is helping America achieve one of its most vital interests: thwarting proliferation of weapons of mass destruction. Iraq, Syrian and Iran nuclear programs remain in check, thanks to Israeli efforts. As tensions with Iran continue to rise, having Israel as a regional ally is more crucial to American than ever. That’s why legislation in Congress keeps including proposals to strengthen U.S-Israeli cooperation, such as the U.S.-Israel Security Assistance Authorization Act of 2018. President Biden’s administration is no different, as he too, has been a long-time supporter of American-Israeli relations.

U.S-Israeli cooperation is nothing new. It dates back to the heights of the Cold War, as Israel was seen as an instrument against Soviet influence in the region, to the need for energy security and the free flow of oil, to fighting religious theocracy after the Iranian revolution. Even when America was busy dealing with its own crisis, the Vietnam War, it still managed to play a role in Israel’s Six Day and Yom Kippur Wars. America’s interests in the region were met by staying by Israel’s side.

Yes, there are new problems that could redirect U.S support in Israel, like China’s rise as a global power, Russia’s presence in the region, or elected Democrats with anti-Israel vendettas. But the public opinion polls in American are showing that any “trend” we think we’re seeing against Israel, is so moderate, it isn’t even worth talking about. Even with America pivoting its focus on Asia, its interest in the “anti-Iran” campaign is more vital to them, which is why the U.S won’t step down from its role in shaping the Middle East. Don’t believe me? Then go look at the 735-million-dollar arms sale deal to Israel that the Biden administration just approved of.

The bottom line is, Israel doesn’t have any better allies in the world than the United States, just as the United States doesn’t have any better allies in the Middle East than Israel. So, it’s a relationship of bilateral cooperation. For me, it is most important to realize that this bilateral cooperation has also been facilitating peace in the region, something many of my American counterparts forget. From agreements with Egypt, Jordan, and now the UAE, Bahrain and Morocco, Americans’ support for Israel has fostered relationships that were once thought of to be impossible. And likewise, while today it seems like an agreement with the Palestinians is impossible, I look forward to the day where American support will lead to that too. We should all be working towards that day, together, for it is in all of our best interests. But until then, don’t think that your hate towards Israel on your social media is going to change anything. It won’t.

About the Author
Alissa Abrahami is in her third and final year at the Interdisciplinary Center Herzliya, where she is completing a double major in Government and Environmental Sustainability. She is also a fellow of the Argov honours program for leadership and diplomacy. Originally from Toronto, Canada, Alissa made Aliya 6 years ago.
Related Topics
Related Posts
Comments