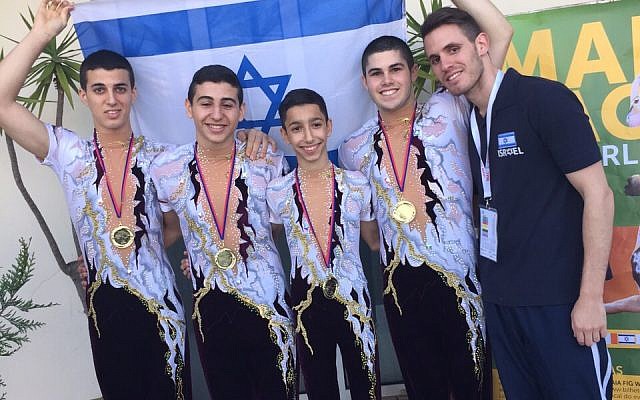 What do these cities have in common?

The “Antwerp pogrom” occurred on April 14, 1941, when 200 pro-Nazi locals burned two synagogues, smashed the windows of Jewish-owned shops, and harassed the Jewish population. From May to September 1942, 1,500 Jewish men from Antwerp were taken into forced labor in Northern France. Jews in Antwerp were rounded up three more times by the Germans and local police in 1942, and 65% of Antwerp’s Jews were slaughtered during World War II.

Fast forward to April 2018. Lidar Dana, Yannai Kalfa, Efi Sach and Daniel Uralevitch, Israel’s acrobatic gymnastics team, march into the arena in Antwerp on a mission. Their flawless performance led the television commentator to remark, “If you are new to acrobatic gymnastics, welcome – you’ve just seen how it should be done.” These four young Israelis surpass China, Russia, Portugal, Belgium and Germany to win the gold. The people of Antwerp stand in silence as they watch the Israeli flag raised, and hear the Israeli national anthem describing 2,000 years of Jews yearning for a return to Israel.

Hans Frank, Hitler’s personal lawyer, explained that the Krakow Ghetto was established to “cleanse” the Jewish quarter of Jews, in order to establish “pure German neighborhoods” in Krakow. The Ghetto was liquidated between June 1942 and March 1943, with most of its inhabitants sent to their deaths in Auschwitz.

Fast forward to July 2018. Seven-year-old Liel Levitan from Tel Hai travels to Krakow with 22 other Israelis and wins the European School Chess championship in the Girls U7 category. The people of Krakow stand silently as the Jewish national anthem is played and the Jewish flag is raised. 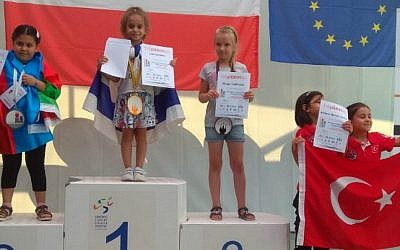 The German city of Chemnitz banned Jewish residency as early as 1539, a ban that lasted over 300 years. On April 1, 1933, the anti-Jewish boycott was implemented in Chemnitz. Violence erupted, and some Jewish-owned stores were damaged. In October 1938, 300 Jews were expelled from Chemnitz. On the evening of November 9, 1938, Nazis and local youths set the synagogue on fire, cheered on by a shouting mob. Jewish-owned stores were looted, windows were smashed and more than 170 local Jews were arrested and taken to Buchenwald. Between 1942 and 1945, 2,000 local Jews – nearly all of the remaining Jews of Chemnitz – were deported to Riga, Belzec and Theresienstadt, where most died.

Fast forward to July 2018. Israel’s under-20 basketball team defeated Greece, Romania, Sweden, Spain, and France in the European Championship in Chemnitz, earning them the right to play in the championship game against Croatia, whom they defeat 80-66 to win the gold medal. The city of Chemnitz is treated to the wondrous site of the hoisting of the Israeli flag and the beautiful sounds of the Jewish national anthem. 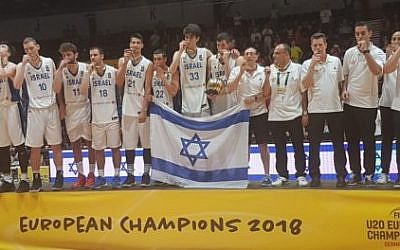 The first expulsion of Jews from Berlin took place in 1446. After they were allowed to return, 41 were executed publicly in 1510 and the rest were expelled. They were allowed back in 1539, but then in 1573 they were expelled “for all eternity.” The community was reestablished in 1671 but in 1730 their rights were severely restricted. On January 20, 1942, the Wannsee Conference to determine the “Final Solution of the Jewish Question” was held in that suburb of Berlin.

Fast forward to August 2018. Israel’s Lonah Chemtai Salpeter wins the gold medal in the women’s 10,000-meter run at the European Athletics Championships in Berlin. Residents of this city – the very symbol of antisemitic and racist policies toward non-Arians – watch a Kenyan immigrant to Israel draped in an Israeli flag celebrate her victory with the playing of Hatikva and the raising of the Israeli flag high into the Berlin sky. 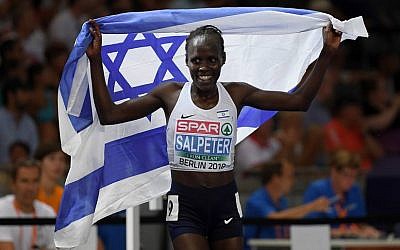 The Jews of Minsk were prohibited from engaging in any business in 1606, until this right was re-established in 1722. They suffered terribly during the Chmielnicki revolt and the Russian-Polish War in the mid-17th century. During the Holocaust, the Jews of Minsk were murdered in the tens of thousands, many of them via mass executions over large pits and in the woods.

Fast forward to August 2018. An Israeli teenager named Linoy Ashram returns to Minsk where she wins the gold medal in the all-around phase Rhythmic Gymnastics World Challenge, breaking the world record in the clubs-handling round along the way. The Jewish flag is raised for all to see, and the anthem of the Jewish state is played for all to hear. 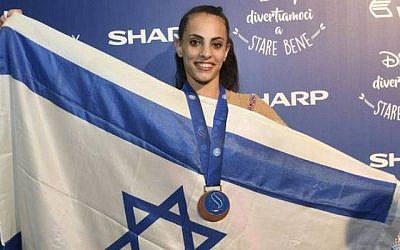 In May 2018, Dublin Mayor Micheal Mac Donncha called for Ireland to boycott next year’s Eurovision in Israel. “I think the horrific ordeal of the Palestinian people needs to be highlighted,” he explained, and that “The Irish-Palestine solidarity campaign has collected the names of 500 artists who have said they would not work in the State of Israel, that they would boycott it in the protest of the treatment of the Palestinian people.” His city council recently passed two resolutions endorsing the anti-Israel boycott movement, calling on the national government to expel the Israeli ambassador to Ireland. 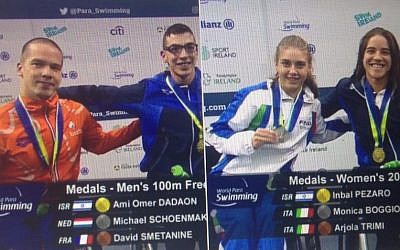 The world can continue to try to persecute and silence the Jewish people and Israel, but as the last six months have shown, we will continue to thrive and experience success regardless of what the world throws our way; and the Jewish national flag and Israeli national anthem will accompany that success everywhere to make sure that the entire world is acutely aware of our success and survival.