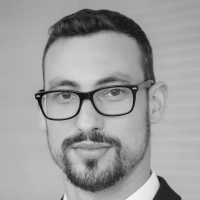 The Blogs
Or Shwartz
Apply for a Blog
Please note that the posts on The Blogs are contributed by third parties. The opinions, facts and any media content in them are presented solely by the authors, and neither The Times of Israel nor its partners assume any responsibility for them. Please contact us in case of abuse. In case of abuse,
Report this post.

Although we live in the most advanced, humane and equal society ever witnessed in human history, we feel as if we are living in the darkest of times. It seems that we can no longer take pride and appreciate our society and values without feeling guilt and shame. A capitalist is a pig, a family values advocate is anti-feminist, a religious person is a fanatic, you’re either with us or against us. The knowledge and the values we looked at a year ago are being disdained and disregarded. As current ‘rights’ movements (whether BLM, SJP, or other) steer us toward identity politics and weaponize politically correctness, we distance ourselves from the values that propelled our society for the last 100 years. We pretend to know more than we actually do on subjects like sexual preference, but forget the knowledge we had for centuries on gender. If this pandemic won’t stop, we might lose everything we worked so hard to build.

The ‘equality train’ was almost at its final stop, its designated destination, but in the last decade we, for some bizarre reason, sped it up and it fell off the rails. Less than five years ago, it was unquestioned that violent protests and looting should be condemned no matter how or why they started. Today, the black lives matter movement will viciously attack any person who dares to condemn the violent protests. But this movement is not alone. Look at Dr. Debbie Hayton, a transgender woman who stated that she is still a male and was accused of a ‘hate speech’, Kanye West who supported Donald Trump and was excommunicated from being black, the gay billionaire, Peter Thiel, who supported the Republicans’ candidate and was denounced by the gay community and Germaine Greer who stated that transgenders are not women and was accused of ‘no longer being a feminist’, these are just a few examples of how the modern ‘rights’ movements weaponization of political correctness and abolishment of freedom of speech. We are being judged by what we are for and against, no middle ground, no compromise.

Martin Luther King taught us to judge others by the content of their character and not by their color, gender, or race. His dream seems so far away from the path of modern ‘rights’ movements, which advocate for ‘identity politics’. Modern ‘rights’ movements encourage us to embrace our identity, as a feminist, as a gay, as a Muslim, as a woman, and define ourselves by that identity and that identity only. We are encouraged to open an argument with our identity using “as a gay…” or “as a women”, even though it should not matter. We encourage our education system and enterprises to look for diversity first and competency later as if diversity was more important. We even have a name for it – preferential treatment. If you dare to support the traditional belief system, you will be considered as an outcast and there will be a bounty on your head. The values of ‘freedom of speech’ and ‘critical thinking’, which gave us the great society we have today, are being sacrificed for the ‘greater good’. In the last 10-15 years, the modern ‘rights’ movements advocated not for equality but for the modification of our beliefs and values. Gays’ rights movements advocate for gays’ marriage but refuse to accept traditional family values. Blacks’ rights movements are calling not only for equality but for the abolishment of capitalism. Women’s rights movements call not for equality but for recognition of the superiority of women in several fields. The modern ‘rights’ movements use political correctness in order to avoid hard questions and this is a very disturbing phenomenon.

By any standards and scale, western liberal society, our society, (which includes Japan, South Korea, and several non-western countries) is considered the most advanced, humane and equal society in human history. It was we who abolished slavery, we who gave equal rights to men and women and more. This wonder is not natural; it is not part of human biology. It was achieved through years of values calibration. These liberal values such as equality, freedom of speech, love thy neighbor, critical thinking, family structure and church-state separation gave us the ability to build our society. Yes, it is not perfect and we will always find room for improvement; in fact, this is one of our liberal values – self-criticism. But we also need to be grateful and cherish the wonder we built. We should never be afraid to discuss any value and ask the hard and not politically correct questions, even if it hurts other people’s feelings. Otherwise, we might lose it all.

About the Author
Or is a technology enthusiast with broad experience in a variety of fields. He grew up in Haifa and later joined one of IDF's elite cyber security units. Or served for five years as an officer, leading top development teams and taking part in developing the next generation of IDF products. After his military service, he worked for several tech companies in software development positions. Or now works as a product manager at Otorio, a cyber security company. While at IDC, where he studies computer science, he joined and later managed a non-profit organization called “Givit,” which helps students in need. Or speaks Hebrew and English. He plans to continue his studies and to complete an MBA or a master's degree in computer science.
Related Topics
Related Posts
Comments