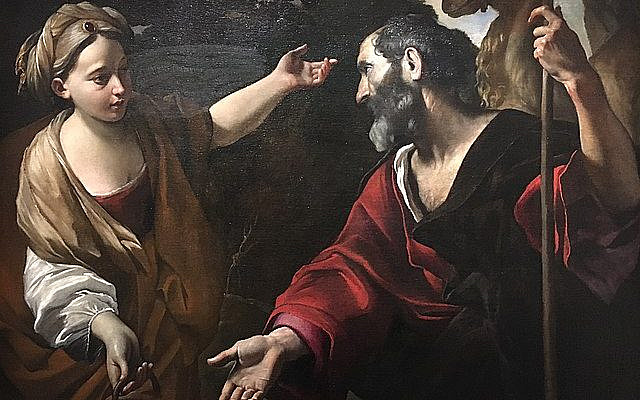 This week’s parsha, Haye Sarah, starts with the death of Abraham’s wife Sarah. Negotiation and communications are important in this week’s parasha.  Not only are the words important, but the delivery is part of the message.  After the mourning period for Sarah, Abraham negotiates for a burial place and eventually buys the cave of Mahpelah.  In the negotiation Avraham mentioned that he is a stranger in the land.  The reader can imagine the kindness and respect in his voice.  He seals the deal with a bow to the sellers and paying for the burial place.

The second negotiation is to secure a wife for Yitzhak. Abraham sends his servant, Eliezer[1] away from Canaan to search for a wife.  Parents are concerned with finding the right mate for their children.  I am reminded of a documentary movie[2] that I saw this week on shiduchim in the ultra-orthodox communities of Israel.  One mother was so concerned about her daughter’s possible mate, that she wondered why she couldn’t decide if he was the one after 3 dates. The mother was crying because she thought the daughter was prolonging getting engaged. The feeling the viewer got was that communication was rather limited.  The viewer wondered how someone could decide on a life-mate after 3 45 minute dates.

Eliezer had a harder task.  He was told to find a wife for Yitzhak and had to close the deal before the couple even met once. He was given a personality quality to look for; the girl had to be kind to strangers.   Eliezer meets Rivka at the well and is attracted to her kindness and beauty. He then negotiates with her father and family so that she will leave and go to Yitzhak.  Negotiation as well as other forms of communications are very important in personal and organizational life.  Negotiation is a give and take.  Each party has something the other needs or wants. But they need a shared goal to succeed. Eliezer sealed the deal with gifts of jewelry.

In each instance the parties must convince the other to trade what they have for what they want. –Abraham had several rounds of talks to get the children of Heth to sell land for a burial place.  Abraham had money and needed to convince the other party to give up some land.  The family of Rivka need to be convinced to let her go to Avraham’s family. These two parallel negotiations exhibit multiple similarities.  There was a negotiation with words on the terms of the deal and then an exchange of something of value.  Abraham paid money for the land; Eliezer gave gifts of jewelry and ornaments.

Abraham and Yitzhak were very lucky that Rivka’s family accepted the proposal and were glad to unite with a relative.  They were lucky that Rivka fell in love with Yitzhak. The cave purchase was more protracted.  The people of Hevron were not happy with the deal.  The Torah needs 16 sentences to summarize the negotiation story.  The burial cave was just a burial place.  The marriage negotiation led to an active marriage that increased the power of Abraham and led to the continuation of the promise made by God for a powerful nation.  Without the marriage, the hope for a people would have ended.  Without this burial ground, another place would have been found.

The clarity of communications in business (as in the purchase of land) and in personal relationships (marriage and family) are not equally important. Each have a place in life.  Attachment to money and property is not as important as family, but each have important places in our lives.  Without money and financial resources, we would not be able to raise a family and without a family we would have fewer reasons to make money and gather resources.

[1] The name of the servant is not found in this story.  The reader assumes his name is Eliezer based on Beresheit 15:2 where the name Eliezer is mentioned as Avraham’s servant.