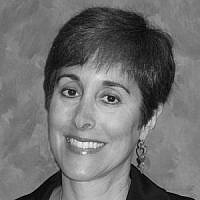 The Blogs
Linda Maurice
Apply for a Blog
Advertisement
Please note that the posts on The Blogs are contributed by third parties. The opinions, facts and any media content in them are presented solely by the authors, and neither The Times of Israel nor its partners assume any responsibility for them. Please contact us in case of abuse. In case of abuse,
Report this post.

Last month, on the Friday before the start of Pesach, we set aside our preparations for a short while to attend the stone-setting for our son Arik’s good friend Andrew Silvershein (z”l). Less than 10 months have passed since the tragic accident that took Andrew’s life, but for Andrew’s family and friends, the wound is still very fresh.

About 25 of Andrew’s friends from his Camp Ramah Darom Gesher aidah (group) attended the ceremony.  To see them together is still heartbreaking and inspirational all at the same time.  But the inspirational part of how they managed to go forward after his death is still a true testament of the extraordinary measure of the organization, Camp Ramah Darom in Clayton, Georgia.

When I think back on last summer, I remember an envelope arriving in the mail a few weeks after camp had ended, with official photos enclosed from my children’s summer at Ramah Darom.  In one of the pictures, 72 beaming faces of young boy and girl 16 year-old teens smiled at me, arms linked one around the other.  The group pictured was Arik’s, and Andrew was one of the smiling faces in the photo.

These beautiful 72 children were photographed just after arriving at Ramah Darom for the start of a very special seven week camping experience completing their years as campers and bridging (therefore the word gesher) the span to their hopeful future return as counselors before the start of their university studies.  No one would have imagined that Gesher 2011 would end the summer with only 71 campers.

By now many people have heard the tragic story of Andrew Silvershein, the Gesher camper who drowned the first week of camp when the whole aidah were on an off-camp trip experiencing the annual traditional white water rafting trip on the Ocoee river in Tennessee. A horrible, tragic, accident.  A young life over before it really had begun.

The story that still has not been fully told is of the wonderful Camp Ramah community, Andrew’s parents and the rest of the 71 campers who were left behind to “trudge on” (as my son Arik has said). And despite the overwhelming sadness and heartache, the tragedy has actually turned into an inspiring story.

I still don’t understand how Andrew’s parents have managed, because it is every parent’s nightmare.  But even in their grief, the Silversheins were focused on their concern for the rest of Andrew’s group, the Gesher aidah.  A week after the funeral, they took their younger daughter back to rejoin her camp aidah and spent a healing visit with Andrew’s friends, making sure that they were OK and encouraging them to go forward and enjoy the summer. They have also established a scholarship fund in Andrew’s name to assist other children in having the wonderful Camp Ramah Darom experience. Truly amazing people.

Part of the Silvershein’s attitude was not surprising due to the nature of what Ramah Darom brings out in just about everyone it  touches. In the last ten years of having Ramah campers, I have been drawn into the feeling of belonging to a community, even though I am not a camper.  My camp experience many years ago was in a place that I also loved, treasured and had fun.   But I don’t remember relating to the camp in the same way my children do with Ramah Darom.  And certainly my parents did not feel a strong community connection.  As my mother has described, “summer camp was a place to give the kids a fun time and keep them busy.”

The Ramah camping movement has taken camping to a whole new level.

From the very first moment the tragedy occurred, Camp Ramah Darom and their parent organization, the Ramah Camping Movement supported the grieving family, Andrew’s friends, the whole camp, the families of the Gesher children as well as all other Ramah families with an incredible amount of organization, grace and sensitivity. Even from the first horrible news, the families were constantly kept in the loop, our questions always anticipated and answered ahead of time. Both Camp Director Geoff Menkowitz and CEO Fred Levick gently led us through this difficult process with the most extraordinarily beautifully written emails which have been both informational and comforting.  Not once was there ever any doubt that our children were not only in the best possible place to grieve but to also move forward towards resuming regular camp activities and normal life.

Religiously and emotionally, the camp allowed the children to find their own paths, but with close guidance and constant supervision.  Rabbis and counselors from within Ramah Darom as well as additional support staff from other Ramah camps were brought in to help the children.  I was moved when Arik related how Gesher campers asked if they could say the mourner’s prayer Kaddish for Andrew. The Conservative rabbi replied he felt it perfectly normal for the campers to say the prayer but suggested that they say Kaddish for the official week of shiva and then stop, like mourners would get up as well and move forward. Arik related that the rabbi explained that while he felt it ok for Andrew’s friends to mourn, they were too young to immerse themselves for too long in the mourning process.  A truly beautiful, flexible and sensitive solution in a difficult situation.

And because of how the camp has worked to support the children, allow them to grieve while striving to have them enjoy their summer the Gesher group developed their own theme for the summer: Hazak 72.  Strong as 72, their complete group.  Moving forward, but never forgetting.

Andrew’s funeral was packed with almost 1000 mourners, a huge outpouring of love and support for the Silvershein family. Many were parents of Gesher campers, wanting to represent our children and support the family at the same time.  There were also many other Ramah families, some who drove many hours to reach South Florida for the funeral.  It was a testament to the feeling of community that Ramah had developed in all of us.  The same feeling held true at the recent stone-setting.  The Gesher kids that were present linked together both physically and emotionally to represent the spirit which the camp had instilled in them.  Andrew will forever remain alive through these devoted friends.

A close friend of mine went over to Geoff and Fred at the funeral last June and told them that the true measure of an organization is not how well they function in day to day business, but how they manage in a crisis.  Ramah Darom could well be a perfect example and role model for other organizations, both Jewish and non-Jewish.  They are a beautiful, wonderful, beacon of humanity from which we should all learn. I am proud to be a member of the Ramah family.

Linda E. Maurice is the director of the Lifelong Learning Institute at Nova Southeastern University in Davie, Florida.  She also teaches media education classes to youth and adult in South Florida.

About the Author
Linda Maurice is the director of the Lifelong Learning Institute (LLI) at Nova Southeastern University in Davie, Florida. She is a former television news producer who has worked for news organizations in New York, Washington and Jerusalem including: NBC, CNN, CBC, The Jerusalem Post and The Jerusalem Report. During the mid-1990’s, Maurice worked with Israel’s Foreign Ministry training outgoing diplomats in effective public speaking and interview techniques. Since moving to South Florida in 2000, she has worked in public relations and teaches media education classes to youth and adults. She joined the LLI in 2007 as community relations manager.
Related Topics
Related Posts
Linda Maurice
Comments