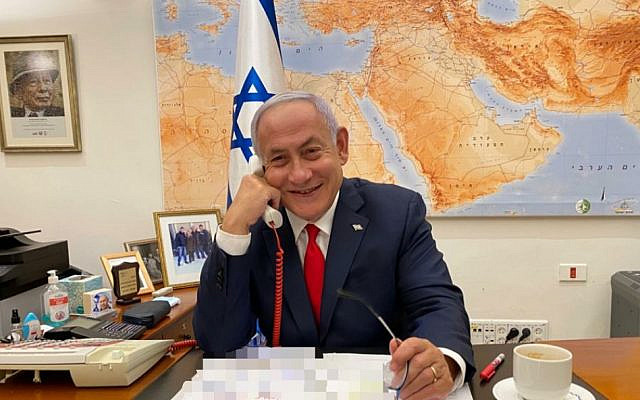 In the mid-1980s there was a popular Israeli song whose refrain was, “The Messiah hasn’t come, The Messiah isn’t calling.”

The 2021 version of the song is: Biden Isn’t Calling. All of Israel has been waiting with bated breath for the sound of his ring, like a spurned lover, waiting and hoping. We sent hints and tweets, and had our friends advocate on our behalf, repeatedly pestering Jen Psaki, the White House Spokesperson: Nu, why hasn’t he called yet? What’s taking him so long? When is he going to finally pick up the phone? When she replied that he will call, but that he is simply busy at the moment — Corona, China, etc. — it sounded uncomfortably like, “It’s not you. It’s me.”

And then, after keeping us waiting for more than four weeks, President Biden finally called. It was a bitter embrace. Why did he wait so long? Doesn’t he love us? Doesn’t he know how important we are to America, to the world?

I wonder if PM Frederiksen of Denmark, or President Fernandez of Argentina are upset and still waiting by the phone, and whether the lack of a call is the subject of national conversation and angst. This is certainly not the case for Netanyahu’s friend and fellow Trump supporter, President Bolsonaro of Brazil.

Why Biden waited so long to call is one question. It almost certainly had something to do with Netanyahu’s passionate embrace of Trump and may also involve an old setting of debts from the Obama administration.

But why were we so concerned? Is our need to be called the result of our dependence on America? Our sense of isolation in the world?

For years now Israel has put forth a narrative of its newfound power and significance, our strong bilateral relations with Russia, China, India. Netanyahu has ridiculed the calls to boycott Israel. We don’t worry about being boycotted, he declared. Others need to worry about whether we will boycott them.

Why, then, was Start up Nation obsessing over a delayed call from Biden, a call which we knew would eventually come?

No doubt part of the reason is withdrawal syndrome from the lavish attention we got used to receiving from the Trump administration, for whom our interests were almost automatically perceived as aligned with America’s. America was even willing to pay countries to sign peace treaties with us. We spoke of the new era of “peace for peace,” as opposed to the old era of “land for peace”; but it was also peace for 50 F-35s to the UAE, peace for recognizing Morocco’s claim to Western Sahara, and peace for removing Sudan from the state sponsor of terror blacklist.

O, what a four years it was. To be so courted, so lavished with gifts and praise. Trump gave us an embassy in Jerusalem and recognition on the Golan Heights. And now? We are reduced to waiting for a mere call. Thank God Psaki at least announced that we would be the first country in the Middle East to receive the coveted call. Don’t worry, she was saying, you are still special to us. But the small print read: You aren’t so special objectively, only relative to your area. A minor victory, but still, something to cling to…

There is a deeper process happening here. Embedded in Israel’s self-identity lies an inner contradiction. On the one hand, the dream of Zionism was that Jews would finally become a people like all others. We were tired of the attention “lavished” upon us by the anti-Semites of the world. We were exhausted by the conspiracy theories which see us as the cause of every evil and calamity, from the Bubonic plague to the California fires. We control neither the world economy nor the press and simply want to be left alone to live in our own homeland, living normal lives.

At the same time, we are the inheritors of the story that we Jews told ourselves about ourselves, whereby our rightful place is to be “a light unto the nations,” “a kingdom of priests and a holy nation.” We are the antithesis of “normal”; we are “a nation that dwells apart.” We are God’s chosen. Even if this chosenness does not express superiority and privileges but rather responsibilities, it is difficult to be satisfied with anonymity under these conditions and aspirations.

We want it all. If the ICC singles us out, it is anti-Semitic because they didn’t first come out against North Korea, Syria, or Iran. We are after all just a nation like all other nations and demand that we be treated as such. At the same time, we project ourselves as unique and special – the most moral, the best military, the leading technological and high-tech incubator, the first to… quarantine, vaccinate, and come out of the pandemic – a true light and gift to the world. So how come he isn’t he calling?

The story we have told ourselves about our uniqueness, at the very least in the realm of aspirations, has been a blessing for Jews and Judaism. Mediocrity is viewed as sin in every aspect of our lives, and we are challenged to walk only by our own standards. While being a part of the world, what is considered acceptable or sufficient is not determined in accordance with what others do, but in accordance with our aspirations for ourselves and the task at hand. It is an enormous burden, but it can also be a great gift. The extraordinary achievements of Jews throughout our history have proven that for the most part we have channeled the aspiration for chosenness positively.

You can’t be a nation like all others, and still expect to be called first.

At the same time, there may be a silver lining in the postponed call. The essence of the Jewish story is not that we are a holy nation, but that we must become a holy nation. The reality and remarkable successes of Israel have often mistakenly caused us to believe that we are, already, and by definition, a light unto the nations, instead of a people who are challenged to be a light. A challenge which we must earn.

Our birthright is not exceptionalism, but an obligation to aspire to it. Chosenness, with the enormity of responsibilities which it entails, should not be a source of arrogance or pride, but rather humility. A humility which is grounded in the recognition of the magnitude of the challenges which we have yet to meet.

It is good that he waited to call. It is good for us to realign the story we tell ourselves about ourselves from our achievements to our responsibilities. It is good that we stop seeing ourselves as the center of the world, a leading super-power. Such a self-perception leads to mediocrity as we confuse who we are with who we ought to be, and our successes with what we have yet to achieve.

But it is also good that he called. Finally.