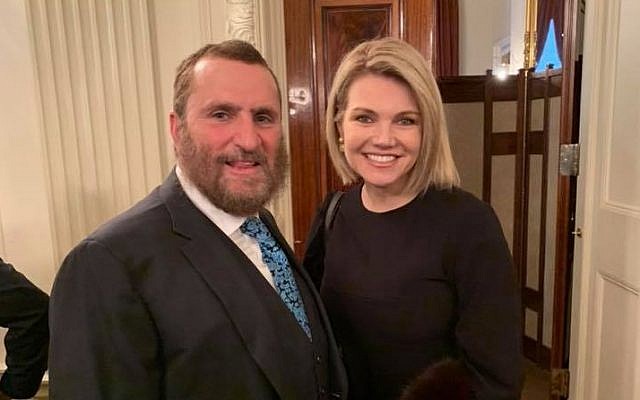 When American Ambassador to the UN Nikki Haley announced her resignation last fall, I lamented the departure of a true fighter for American values, Israel, and human rights. We also all began to ponder the question of who would rise to take her place in the world’s most global forum.

Earlier this month, Bloomberg reported an answer: longtime journalist and current State Department spokeswoman Heather Nauert is slated by President Trump to serve as America’s next ambassador to the UN.

Immediately, Nauert took fire from the opinion pages of leading global news sites. Primarily, they pointed out her supposed inexperience in diplomacy and policymaking. Trump had chosen to “elevate a foreign policy novice into the top echelons of US diplomacy,” the Washington Post asserted. The Guardian, too, decried Nauert’s appointment, describing her simply as “a former Fox anchor with no background in policymaking or negotiating.”

A second argument against her appointment usually followed. With less-than-usual experience in policymaking, Nauert, they claimed, would serve only as a mouthpiece for the Trump administration, without actually contributing to the formation of policy at the cabinet level.

As a citizen of the United States and a defender of her values of freedom and democracy, I too was pensive as to whether Heather Nauert had what it takes to promote those values in an assembly that wholly mocks and ignores them. Having looked into the subject, though, I believe that Nauert is an inspired choice.

Recently, I met Nauert at the annual White House Chanukah party, where we were introduced by Jason Greenblatt, the president’s lead Middle East negotiator. Later, I sat with her at the State Department. Despite the upcoming appointment and inevitable confirmation battle, Heather was gracious with her time, and we had an extensive meeting. Throughout, Nauert was engaged, upbeat, and fully erudite. On an interpersonal level, I found her to be to be a brilliant woman of dignity, humility, and grace. She will charm the world.

In our meeting, we discussed the dire humanitarian crisis in Syria and how much I had pressed her predecessor in the Obama administration, my friend Samantha Power, to do something about the gassing of Muslim children, to no avail. We discussed how the ambassadorship to the UN provides an unparalleled platform to defend human rights and promote core American values.

We also discussed her visit to Myanmar, where she has been a proponent of greater American action against the terrible crimes being committed against the nation’s Muslim Rohingya minority.

Heather demonstrated a consummate grasp of policy. Equally impressive were the moments where she listened. Unlike so many of those who populate the halls of Washington, she was eager to hear, and in so doing displayed modesty and a willingness to absorb lessons from all people — apparently, even me. At any level, but especially at those where every word and decision can have global implications, such special character traits ought not to be discounted.

Still, a person’s character, no matter how refined, is not enough to merit the responsibilities of such a critical ambassadorship, and Nauert’s level of experience needs to be addressed. Upon closer examination, though, Nauert has more policy experience than critics have acknowledged.

Firstly, Nauert’s 20 years of experience as a top news anchor and television host on a leading American news network cannot and should not be glossed over. It is the job of all publicly televised news correspondents to know the topics they are expected to cover. And, with such knowledge comes much credibility. Walter Cronkite was a news anchor for CBS, but his insights into the efficacy of American military policy in Vietnam were considered wiser and more responsible than those views advocated for by the four-star generals who were running the war. The man who had never donned a uniform had become “the most trusted man in America” — it was proven in a poll — all from his years spent covering American policy for the camera. Cronkite, parenthetically, was not the only one. Other leading journalists have achieved similar oracle status, including the late Tim Russert and the great Bob Woodward. One need not agree with everything they say, but few would dare to question their experience in matters of policy.

That leading media outlets would overlook this is especially ironic.

Moreover, as the spokesperson for the State Department for two years, and the person charged with explaining policy to the world, it is hard to imagine key decisions being made without her input.

There is a more important question, though: when determining the qualifications of a potential UN ambassador, how much does experience in policy-making matter?

To answer this question, I’ll go back to the tenure of Samantha Power, who, in June of 2013, was nominated by President Obama to serve as America’s Permanent Representative to the UN.

To say Samantha Power seemed qualified for the job would be an understatement. Like Nauert, Samantha also began her career as a journalist. After covering the genocide in Srebrenica, however, Power reoriented all of her efforts into fighting genocide and protecting human rights. She went on to earn a doctorate in law from Harvard, where she served as founding executive director of the Carr Center for Human Rights Policy at Harvard’s Kennedy School of Government, where she later served as a professor of Global Leadership and Public Policy. She also wrote, A Problem From Hell, a Pulitzer-prize-winning masterpiece and the undisputed go-to book for those who hope to understand the scourge of genocide and the world’s inefficacy in preventing it.

As one who has spent decades spreading genocide awareness and as a member of a people that suffered the worst genocide in history, I could not have been more excited for Samantha to hold this job. She was my hero. I put my credibility on the line to help her vault opposition in the Senate and in the Jewish community, where many did not trust her.

One particular problem with Power was an interview she had given in 2002 in Berkeley, where she foolishly responded to an offensive hypothetical question about Israel perpetrating a genocide against the Palestinians. In her answer, Power said America would have to be ready for “alienating a domestic constituency of tremendous political and financial import” — an obvious reference to Jews and the pro-Israel community.

Despite the profoundly offensive statement, which she apologized for and repudiated, I felt her decades of activism against genocide mattered infinitely more. I arranged meetings between the candidate and the Jewish leadership and published multiple op-eds defending her appointment. The leading diplomacy news-site, Foreign Policy, even published a front-page article titled “How Michael Jackson’s Rabbi Made Samantha Power Kosher.”

In the end, though, Samantha Power’s tenure would be a disappointment — not by my standards, but by hers. After all, Samantha Power would betray the values that built not only our nation but her career.

Samantha Power spent years calling on the United States to recognize the Armenian Genocide and even opened up A Problem From Hell with a masterful chapter on the topic. Just a week before the 2008 Presidential election, Power, a close ally of Obama’s, even published a video for the Armenian-American community telling them to vote for Obama since only he would officially term theirs a genocide. Still, for fear of alienating Turkey, Power repeatedly refused to use the words “Armenian genocide” throughout all four years of her tenure — even 2015, when Armenians across the world commemorated 100 years since the start of their still-unrecognized genocide.

Samantha Power made it a pillar of her life’s work to ensure the world never stand by should another genocide occur, as they had during the Rwandan Genocide in 1994. There, America never once used force to stop advancing Hutu militias, or at least knock out the broadcasting antennae that was directing their deadly campaigns. When she served at the UN, however, Bashar al Assad was using poison gas to kill and subdue innocents across Syria. Almost 50 incidents of poison gas were reported during Power’s tenure, and not once did America respond with force. On the contrary, Power helped negotiate a pathetic agreement with Russia, whereby Assad would “remove” all his poison gas from Syria. We know how that turned out.

Ultimately, it is not knowledge of the craft that gets a policy passed – only raw conviction can do that. When push came to shove, Power was willing to betray her beliefs to maintain her position — a fact that explains her policy failures. Despite her many qualifications, she lacked the final qualification: moral courage. Samantha Power, once someone who so many of us revered, was diminished by her ambassadorship.

Thus far, Nauert has shown her principles to be made of the toughest fiber. I say that not only from her willingness to take on her nation’s enemies, but from her readiness to break with her own administration. Even the Guardian had to admire how Nauert “[spoke] out strongly in support of journalism, at a time the president has referred to the press as the “enemy of the people.” Nauert also called for accountability for the crimes against the Rohingya, while her administration wavered over whether they would call the mass killings a genocide.

In an administration where those who break do so in “anonymous” op-eds, Heather Nauert’s public disagreements with her superiors indicate that she is part of the policy conversation. More importantly, both about journalism and the Rohingya, Nauert held the higher moral ground. Should she maintain that commitment to principle, I’m fully confident that she’ll prove herself an outstanding beacon of American values at the UN and a great light of freedom to the world.