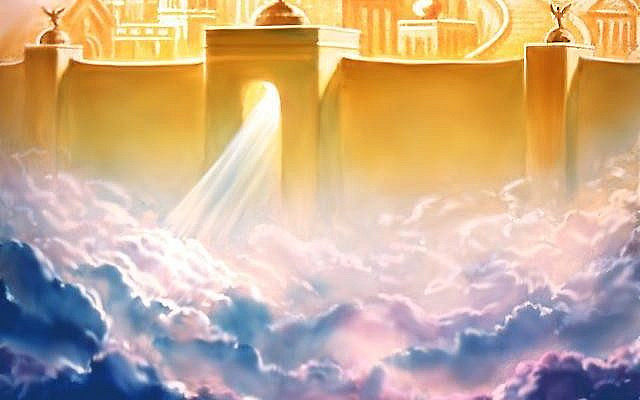 In the previous post, I discussed the stage of Exodus and Contemplation of the New Heaven. If we continue our Exodus journey, we could enter into the Heavenly Jerusalem itself. This is the reality of the new Heavenly Jerusalem Cosmic cycle of evolution. In it we will gather the fruits from the outgoing Indo-European cycle, will continue the Exodus to the higher worlds and will meet the Divine Masters for co-creation with them.

We could find a metaphysical picture of the Heavenly Jerusalem in various world religions: in Judaism, in the visions of the Prophet Isaiah and the Prophet Ezekiel, in Hinduism in the teaching about the Yugas, in Christianity in the Book of Revelation by St. John, and others. For instance, in the vision of St. John (Chapter 21) the Holy City, the New Jerusalem, has twelve gates and is like a colossal metaphysical Zodiac-Mandala:

The Spirit took control of me, and the angel carried me to the top of a very high mountain. He showed me Jerusalem, the Holy City, coming down out of heaven from God and shining with the glory of God. The city shone like a precious stone, like a jasper, clear as crystal. It had a great, high wall with twelve gates and with twelve angels in charge of the gates. On the gates were written the names of the twelve tribes of the people of Israel. There were three gates on each side: three on the east, three on the south, three on the north, and three on the west. The city’s wall was built on twelve foundation stones, on which were written the names of the twelve apostles of the Lamb. (Revelation 21: 10-14)

In essence, ‘the twelve gates’ are the spiritual paths traced by the world religions which lead, through one or another ‘entrance’, to the wholeness of the Heavenly Jerusalem. The ‘twelve tribes of the people of Israel’ are the archetype of the whole of humankind, while ‘the twelve apostles of the Lamb’ personify specific human qualities and virtues enabling entry into the Holy City through the various gates.

The Throne of God, Metatron, the four metaphysical directions (east, west, south, north) and the twelve gates, ‘three on each side’, depict a gigantic cosmic-spiritual Zodiac. In this metaphysical Zodiac G-d is the cosmic-spiritual Sun which never sets; the four directions are the turning points of the spiritual ‘seasons’ and the ‘twelve gates’ are specific cosmic-spiritual fields of energy (like twelve spiritual zodiac signs). The ‘seasons’ correspond to the great spiritual epochs in the history of humankind – for instance, the Satya, Treta, Dvapara and Kali Yugas, according to the Hindu tradition.  Each world religion comes in a particular cosmic-spiritual season (historical epoch) and reveals a complete picture of the Universe but in accordance with its ‘season’.  Thus, the religions form one or another ‘room in the Father’s house’ with a specific gate (i.e., spiritual path) of entry into the Heavenly Jerusalem. The interpretation of the Holy City as a cosmic-spiritual Zodiac allows us to integrate all spiritual epochs in the Indo-European cycle of evolution (from the previous Golden Age, the last Satya Yuga, to the coming new one) into a gigantic Zodiac. This is the contemplation of all human history on Earth in the panorama of the great metahistorical ‘cosmic-spiritual year‘ in the life of humankind.

In other words, the vision of the Heavenly Jerusalem is a typological picture of the whole metahistorical cycle of humankind’s life on Earth since the Fall – the expulsion of Adam and Eve from the Paradise – to their return back to the Father’s house. It includes all historical epochs through which humankind has passed during the process of involution (from the Garden of Paradise to the material world) and evolution (from the ‘dark, material’ consciousness evolving to cosmic-spiritual consciousness). In this picture all initiations in human history, such as those of Enock, Krishna, Hermes, Moses, Zoroaster, Buddha, Lao Tzu, Orpheus, Pythagoras, Plato, Jesus Christ, Muhammad, Bodhidharma, the Master Beinsa Douno and many others can be inscribed.

Each one of the twelve gates of the Heavenly Jerusalem leads to a majestic Divine Temple of one or another world religion. Each Temple embraces the whole vertical structure of Creation with its three worlds – the earthly, the celestial and the Highest Divine World, reaching the Absolute Origin of Being in the World of Emanation. The Divine Masters, Founders of religions, and the Personifications of the Divine Feminine connected with them, keep the gates of the Temples in the Heavenly Jerusalem always open in order for millions of followers to enter and to receive their initiation.

The second vision which could help us to understand the essence of the Heavenly Jerusalem as a majestic Mandala is the one described in the previously quoted Sürangama Sütra. Anticipating the coming of the Enlightened One, Maitreya-Buddha, Tomo Geshe Rimpoche had a staggering vision of ‘the Blessed Lord, sitting upon the throne in the midst of Buddhas and Bodhisattvas from all the ten quarters of the  universe and manifesting his transcendental glory.  The Sürangama Sütra vision is a vision of the glorious, breath-taking Buddhist Mandala which reveals the mystery of Creation from a Buddhist point of view.  Now, in the light of new Heavenly-Jerusalem cosmic cycle, we could imagine the CREATOR, personified by Metatron, sitting upon the Throne of God and shining with transcendental glory.  From each of the twelve gates of the cosmic-spiritual Zodiac, the Divine Masters of humankind – Krishna, Hermes, Moses, Zoroaster, Buddha, Jesus Christ, Muhammad and others – radiate Divine Light with dazzling brightness which converges upon the crowns of the CREATOR. Similar to the Buddhist Mandala, each Divine Master has his own place in this Mandala of the Heavenly Jerusalem.  He appears in a unique posture, with specific cosmological characteristics such as element, colour, symbol of initiation and others which symbolize his particular initiation.  Each Divine Master is accompanied by his Feminine Counterpart who plays an important role in his mission.  So, by meditating on them we will receive their initiations and we will enter into the Heavenly Jerusalem through their respective gates.

The celestial images of the Divine Masters appearing at the twelve gates of the Holy City are emanations of Metatron.  At the same time, each one of them reflects the light of all the others in accordance with his own image and spiritual essence. Thus, the Mandala of the Heavenly Jerusalem is an illumination about the glorious appearance of all the Divine Masters simultaneously from the twelve gates of the New Jerusalem.  Radiating from the Divine Centre as rays of G-d, they reflect the essence of each other, keeping however their own unique identity.

Each one of the twelve gates of the Heavenly Jerusalem leads to the majestic Divine Temple of one or another world religion.  Each Temple embraces the whole vertical structure of creation with its three worlds – the earthly, the celestial and the Highest Divine World, reaching the Absolute Origin of Being.  The Divine Masters, Founders of the religions, and the Personifications of the Divine Feminine, connected with them, keep the gates of the Temples in the Heavenly Jerusalem always open in order for millions of followers to enter and to receive their initiation.

Having passed along the cosmic-spiritual path, humankind will enter into the Heavenly Jerusalem enriched by many spiritual experiences and various initiations.  Each initiation, however, regardless of the time it was given to humankind, is not lost from God’s memory, but remains to shine throughout eternity as a spiritual jewel. After its return to the Heavenly Jerusalem, humankind will resurrect all initiations through which it has passed and experience them as the ‘many rooms in the Father’s house’. Thus, by the grace of G-d, it becomes possible to go beyond the stream of cultural-historical time and to transform diachrony into synchrony.  In other words, we can rise above the cycle of the cosmic-spiritual seasons in the evolution of humankind and encompass the whole macrostructure of the spiritual Zodiac in which the various initiations find integration.

Therefore, the Mandala of the Heavenly Jerusalem is a basis for integration of all religions. Although they have very different ways, often even opposing, due to the particular cosmic season in which they flourish, they come from one and the same Divine centre in the World of Emanation and lead back to it.  The knowledge of their differences and their essential unity will allow the misunderstandings between religions to be transcended and combined work for the descent of the Kingdom of God on Earth to begin. Moreover, the Mandala of the Heavenly Jerusalem will open up the possibility for easy passage from the spiritual world of one religion into the spiritual world of another. Thus, the followers of the different religions will become free citizens of the Holy City.

In principle, human beings, who were created in the image of God, should not have descended to the lower cycle of involution – i.e., entered the previously described cosmic-spiritual year of life in earthly consciousness.  However, after the Fall, due to the power of cosmic law, humankind descended into the material world and had to undergo a very long and painful metahistorical process of involution and evolution through the spiritual seasons.  Naturally, after humankind has completed its process of ascension and has reached the Zenith of its earthly evolution, it will not descend back again but will start a qualitatively new cycle of spiritual evolution in the celestial worlds.

When the archetypal structure of the Cosmic-spiritual Zodiac is projected onto the first, material, world, it determines a long historical involution and evolution which lasts thousands of years.  When however, it is activated in the second, celestial, world, the structure of the cosmic-spiritual Zodiac determines the pattern of just one spiritual year in the life of humankind which gives initiatic fruits twelve times a year – once every month.  After the event of the Second Coming the initiatic fruits, which humankind will bear twelve times a year, will not only be the fruits of the initiations from the First Coming of the Masters, but the ‘hybridised’ fruit of each initiation reflecting all others.

In the highest Divine world, the structure of the cosmic-spiritual Zodiac manifests itself as the wholeness of the Holy City of Jerusalem with its twelve gates and the Throne of God, which shines as the eternal spiritual Sun upon the City.  On this level the cosmic-spiritual Zodiac becomes a Divine archetypal structure which can be contemplated in one single act of   illumination. Thus, by ascending to a new higher cycle of evolution, humankind will fulfil its original Divine purpose envisaged by G-d from the beginning of Time – going not through various painful historical epochs of earthly life, but from initiation to initiation in the celestial realms.