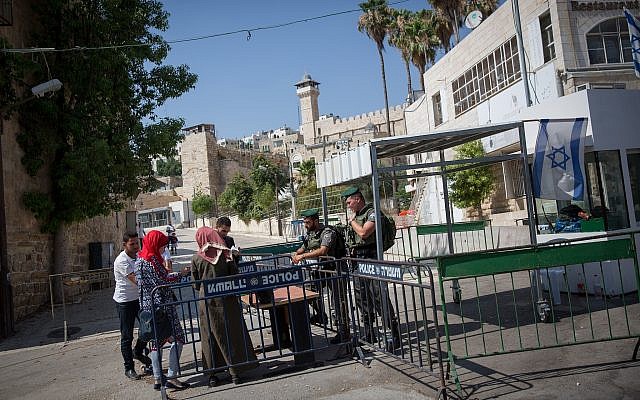 Border Police officers check the ID of Palestinian women at the entrance to the Tomb of the Patriarchs in the West Bank city of Hebron on July 9, 2017. (Miriam Alster/Flash90)

This Shabbat, we read about the death of our matriarch, Sarah. The Torah portion of Chayei Sarah recounts Abraham’s purchase of a burial plot for her, and we are told that he “buried Sarah his wife in the cave of the field of Machpelah, facing Mamre, which is Hebron, in the land of Canaan” (Genesis 23:19).

Nowadays, Hebron is the largest city in the West Bank, with a Palestinian population of around 170,000. Around 500 Israelis live in five small, heavily guarded, settlement enclaves in the city centre, close to the huge Herodian building which has stood above the traditional site of the cave of Machpelah for over 2,000 years. Over the centuries it has served as a synagogue, church and mosque.

Whilst based in Jerusalem this year, I visited Hebron several times to learn about the current reality in the city. I visited Mohammed Al Mohtaseb, a young man living with his family a couple of hundred meters from the cave of Machpelah, in a building which has been his family’s home for six generations. Their home is in H2, the part of Hebron which is controlled by the Israeli army (the remainder of Hebron, H1, is, like other Palestinian towns and cities, controlled by the Palestinian Authority). As well as the 500 Israeli settlers, around 30,000 Palestinians live in H2.

Palestinian life in H2 is difficult. This dense urban area in the middle of the city can only be accessed by passing through one of the checkpoints that cut the surrounding streets in half. Permits have to be inspected; there are often queues. Most Palestinians who live in H2 don’t have a permit to enter the area by car, and there are some roads that Palestinians may not drive on at all. Mohammed lives 500 meters from a checkpoint, and anything he brings in from outside H2 — say a new fridge, or furniture — must be brought on foot for the last 500m. Some of the checkpoints close at night, meaning a resident of H2 coming back late may have to take a long detour to get home. Few Palestinians who live outside H2 choose to enter it, socially isolating those who live there. 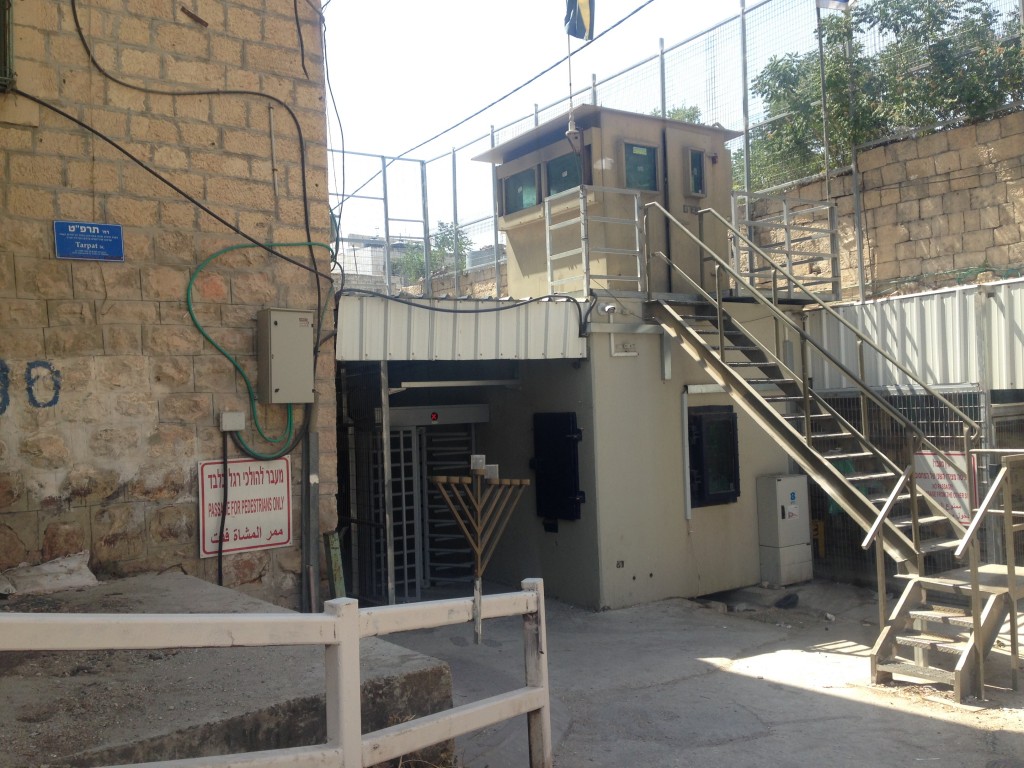 A checkpoint in the middle of Hebron

Even within H2, Palestinians cannot move freely. One road is divided lengthways into a narrow corridor for Palestinians, with most of the road for Israelis and internationals only. Another, Shuhada Street, is completely closed to Palestinians. Access is permitted only to Israelis and internationals who have to show their passports to soldiers before walking down the street. Palestinians who live on Shuhada Street have to enter their homes through back entrances, their front doors having been welded shut by the army.

Walking down Shuhada Street, previously one of the busiest market streets of the city, never became less eerie. Doors are welded shut, some marked by anti-Arab graffiti, some with plants growing over them. Instead of markets, shoppers and bustle are soldiers, watchtowers and silence. Walking down an empty street, knowing you are being closely watched by soldiers, is a surreal, dystopian experience. 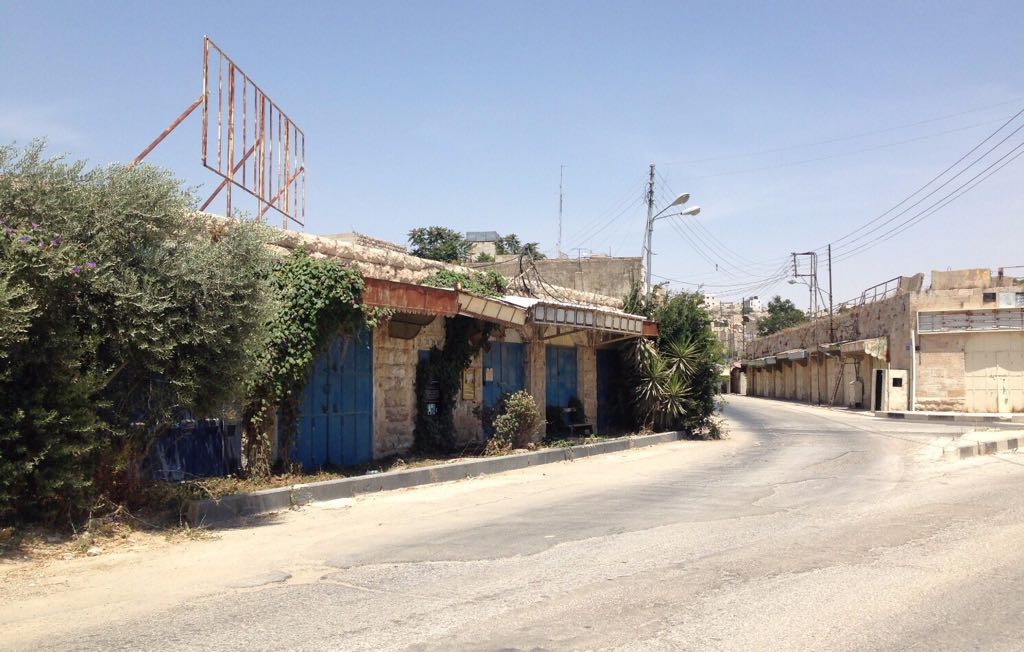 Settler harassment and violence is another feature of life for Palestinians in H2. Mohammed’s father runs a shop near the entrance to the cave of Machpelah; he is often taunted by settlers, but on one occasion they attacked the shop, led by the extreme right-wing activist, Baruch Marzel, who subsequently released a promotional video for his political party showing the attack. 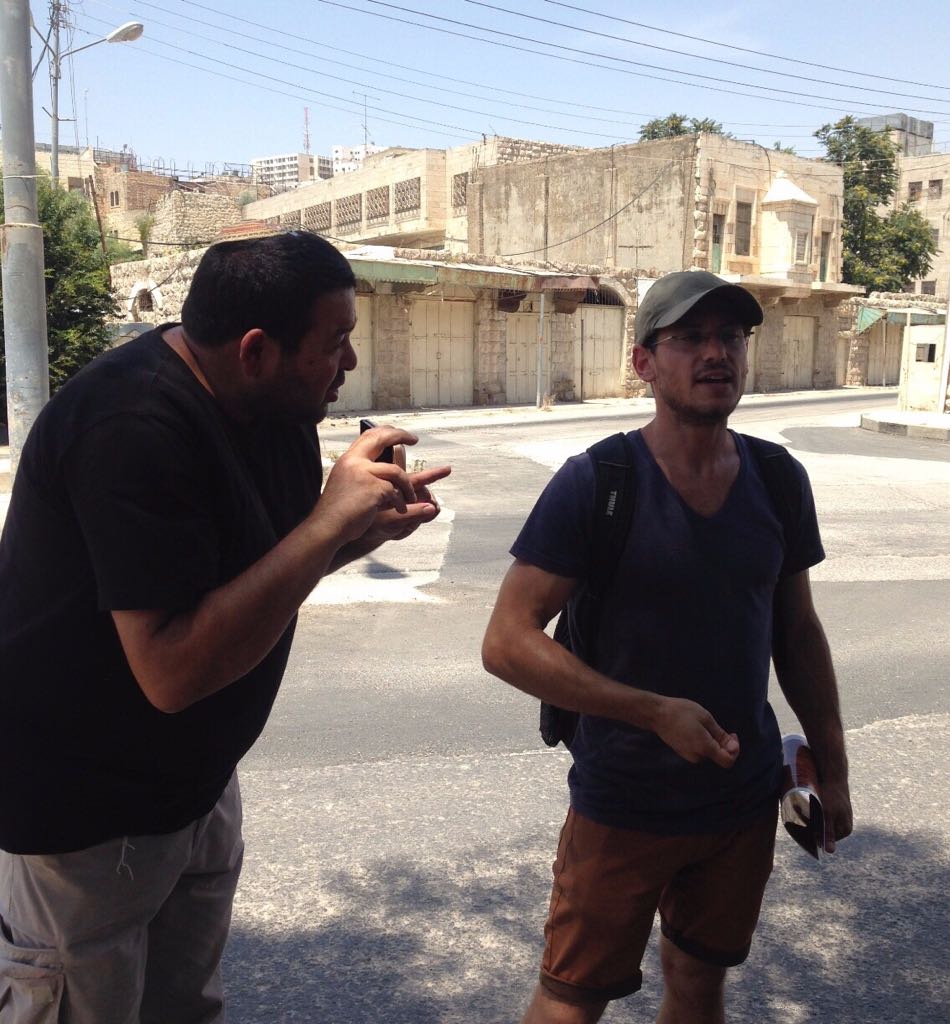 A settler seeking to interrupt our tour guide

Jews who do not share the settlers’ perspective are another target for settler harassment. I toured Hebron with Breaking the Silence, a group of former IDF soldiers who speak about what they did during their service, to make sure the Israeli public know what is happening in the West Bank. Throughout the tour, we were followed by settlers. Their young children filmed us and yelled at us that we were traitors and liars. One settler followed us constantly, trying to disrupt the tour by interrupting our guide. We were called us anti-Semites, and told us that we were not real Jews. Soldiers followed us, to make sure the settlers did not become violent. Needless to say, Palestinians are not protected in this way. Indeed, for Palestinians, the soldiers are also a threat.

Mohammed told us that in 1999, when he was 8, he and his cousin Jawad, who was then 11, were playing football outside their home. An Arabic speaking soldier ordered the boys to give him their football. Jawad refused. The solider threatened to shoot him; Jawad responded, “So shoot me”. And the soldier did, shooting a child who posed no risk to punish him for talking back. The bullet exploded in Jawad’s knee, and still causes him problems today.

When their grandmother Wedad, who was in her 70s, was told that Jawad had been shot, she had a heart attack. She died, sharing the fate of our mutual matriarch Sarah, buried only a couple of hundred meters away: the midrash (rabbinic commentary on the Bible) teaches us that Sarah died after hearing that her son, Isaac, was almost sacrificed during the Akeda, the binding of Isaac.

The segregation in Hebron is often justified by the need to prevent violence between its Jewish and Arab residents. But it was not, as most Jews assume, Palestinian violence which instigated the segregation. Rather, it was the 1994 massacre in which Baruch Goldstein, a doctor living in the neighbouring settlement of Kiryat Arba, killed 29 Palestinians as they prayed during Ramadan at the cave of Machpelah (known to Muslims as the Ibrahimi Mosque). Until that time, the building had been shared by all faiths; following the massacre it was separated into Muslim and Jewish sections and Shuhada Street was closed to Palestinians — the shops, life and vibrancy of the neighbourhood becoming another of Goldstein’s victims. 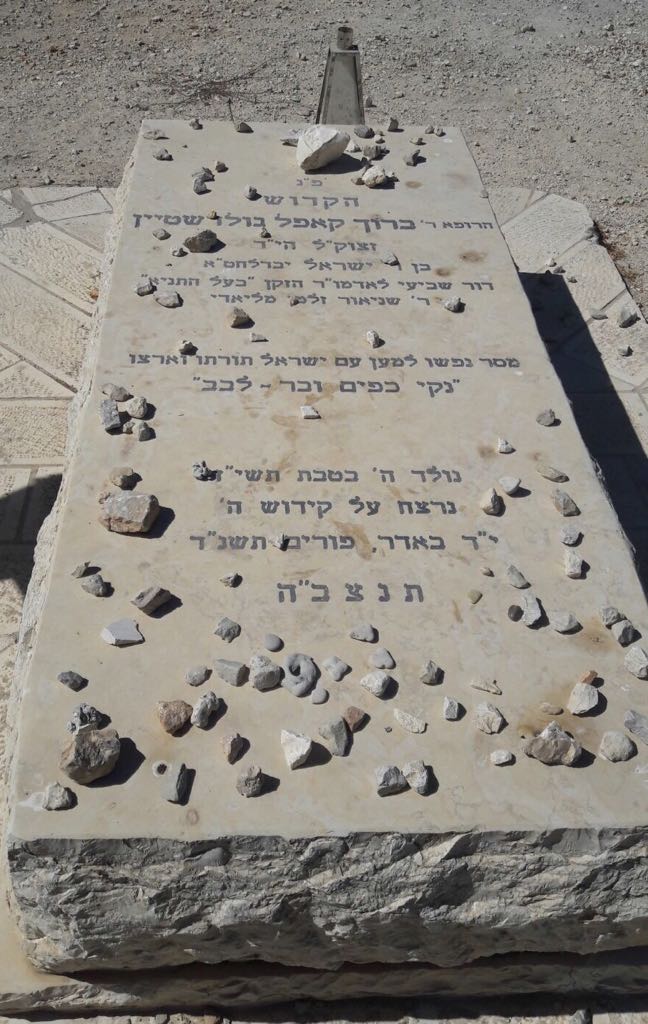 Baruch Goldstein’s grave. The inscription includes the words “He was killed for the sanctification of God”

In Kiryat Arba, inhabited by around 7,000 Jews, I visited Baruch Goldstein’s grave. It lies in Meir Kahane Park, named for the politician who inspired Goldstein, and whose party, Kach, is banned as a terrorist organisation by Israel, the US, and the EU. The grave, topped by many stones, the traditional Jewish mark of respect for the dead, is in a large space to accommodate groups who pray here. That this grave has been allowed to become a pilgrimage site, in a public park of this name, speaks volumes about the Jews who choose to live here and the government’s accommodation of their extremism.

The Jewish connection with Hebron, maintained over the centuries, is indisputable. That Jews can now once again visit this holy site is understandably a cause of joy for many. We must, however, face the reality that the Israeli regime which operates in Hebron today, and the mindset which allows it to continue, are far from holy. 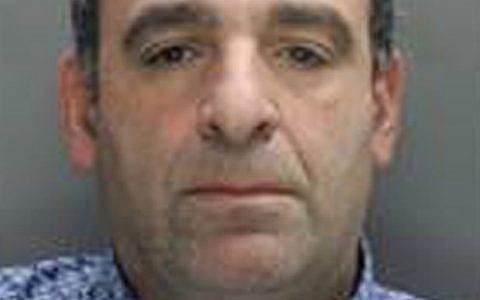