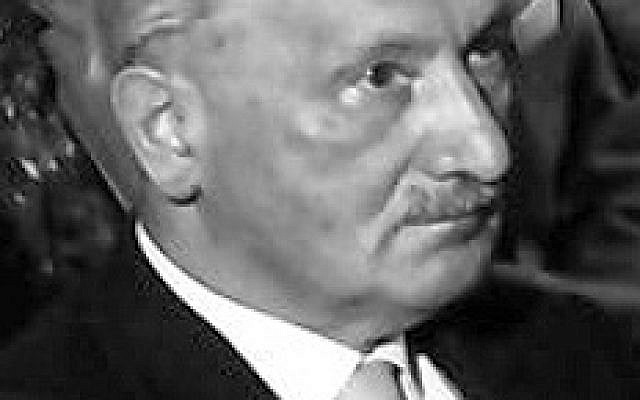 Michael Chighel, Ph.D. in philosophy from the University of Toronto, taught at the universities of York, Queen’s and Waterloo, produced Passages and Messages for eleven seasons on Canadian television (CTS). Until this year he held the Rohr Chair of Jewish Studies at the Lauder Business School in Vienna, where he taught Torah, European ethics and political economy. He lives in Jerusalem and launches The Ashkenazium first Symposium featuring Elliot Wolfson and Peter Trawny, from January 30th to February 2nd 2023, in Budapest.

Could you tell us first how you encountered the philosophy of Martin Heidegger ?

Michael Chighel: I first encountered Heidegger as an undergraduate student at the University of Toronto. It was 1989, I think, a rather historical year. I took a course on Being and Time. We read the text in English translation. But it might as well have been in German — and my German at the time was quite poor. I was completely lost in the lectures and in the readings. I could not understand the terminology or follow the style. The entire point of the book fell on dead ears for me. I must confess, I have no idea how I managed to pass the course. It was only when I became friends with a colleague in graduate school who was writing his PhD dissertation on Heidegger’s concept of “Mitsein” that I began to understand a little something. Thanks to many conversations with James Gilbert-Walsh, who now teaches philosophy at St. Thomas University in New Brunswick, it gradually became apparent to me that Heidegger was not just one of the greatest philosophers of the 20th century but the greatest. This is a superlative estimation I share with Leo Strauss, Emmanuel Levinas and above all Philippe Lacoue-labarthe.

What are the correspondences between Heidegger and the Jewish tradition ?

Michael Chighel: This is not an easy question to answer “standing on one leg.” It is obvious to everyone who knows Elliot Wolfson’s work, that his 2019 publication Heidegger and Kabbalah has shown more clearly and more thoroughly than any other study the correspondences (“striking affinities,” he calls them) between the “story of Beyng” (Seynsgeschichte) and the story of Creation told in Lurianic Kabbalah. There is an extraordinary narrative resonance between the Heideggerian account of the “withdrawal” (Entzug) of Being which took place at the origins of Western thought and the Lurianic account of Tzimtzum, the “withdrawal” of the Divine at the origins of the Universe. This is the main point of correspondence. And it is profoundly significant, I think. I hope I do not need to explain how important Ma’ase Breshit is for Judaism. It is the one question, for example, on which the Rambam took a strong position against Aristotle, the Greek master who was otherwise for him “the prince of philosophers.” In our own times, I believe it is necessary to show how R. Isaac Luria’s account of Ma’aseh Breishit is ultimately radically different from Heidegger’s account of the “Event of Being.” But this can only be shown after we follow Wolfson’s meticulous explanation of how the two accounts display an amazing affinity.

Was the reading of Marlene Zarader helpful for that work ?

Michael Chighel: For me, in a way, everything begins with Zarader’s La dette impensée. This 1990 book is pioneering. It is the book that opens up the entire question of how to position Heidegger vis-a-vis Judaism. Before Zarader, there were many trenchant critiques of Heidegger, beginning with Martin Buber’s critique. But Zarader was the first to show that what is at stake in a proper Jewish confrontation with Heidegger goes well beyond critique. To critique Heidegger in the way that one critiques any philosopher with whom one disagrees is to miss the unique “greatness” of Heidegger. It’s like critiquing Copernicus’s De revolutionibus. Obviously this Copernican text has flaws. Obviously there are corrections that can be made to the Copernican Theory. But to suppose that one has offered anything like a revolution on the scale of the Copernican Revolution by virtue of critiques is quite simply to fail to be an astronomer. It is the same with the Heideggerian Revolution, I believe. To be happy with a critique of Heidegger is to fail to be a philosopher. And I think that Marlene Zarader was the first who grasped this, to grasp the scope of the problem, as.a Jewish philosopher. The key to her beautiful book is to appreciate how the “unthought debt” owed by Heidegger to Judaism is a debt that the whole of Greco-Christian-European thinking owes Judaism in way that this thinking has yet to see.

Did you read the last translations of the Black books ?

Michael Chighel: I have read the Black Notebooks in German. My own book on Heidegger (Kabale, 2020) was kindled by a reading of Trawny’s publication of the Notebooks in 2014 and his beautiful little book, Heidegger and the Myth of the Jewish World Conspiracy.

Isn’t there still some covered antisemitism, justifying the idea that jews aren’t “humans” or at least are without “world” and conditionned to “traffic” and “world criminality” ?

Michael Chighel: I am sorry for referring to my own publication again, but the question really makes it necessary. In Kabale (which, by the way, is the German word for “cabal,” “intrigue,” like in Schiller’s play, “Kabale und Liebe”), my entire argument against Heidegger is sparked by his remark in the Black Notebooks about “the worldlessness of Judaism.” I argue that Heidegger is basically right: Judaism is a teaching of worldlessness. This a central kabbalistic idea that emerges most clearly in the teachings of the seven Habad masters. It is what Gershom Scholem called “acosmism.” I think Heidegger got this right about Judaism. What he got wrong, dead wrong, from a Jewish standpoint, is the great value he places on world and worldhood. Following Levinas’s lead, I have tried to show how Heidegger’s intoxication with worldhood (Weltlichkeit) is tantamount to a heathen intoxication with Nature, a pagan desire for the Great Mother. In fact, the intoxication is toxic. So while I reject the condemnation of Heidegger as an anti-Semite, I do so in the name of a greater condemnation for a crime must worse than anti-Semitism, much worse by Jewish standards. I call this crime anti-Adamism. I see Heidegger as a kind of Bilaam who tries to curse the Jews for being worldless yet ends up blessing them, because a minimum of world, for us, means a maximum of God. We Jews are drunk on God.

Is the kabballah helpful to understand Heidegger’s ideas ?

Michael Chighel: To what I have said above (question 2/), I would only add that kabbalistic motifs may be useful for understanding Heidegger to a rather limited extent. Kabbalah is in reality far more complex than Heideggerian thinking. The simple reason for this is that Heidegger is one genius while Kabbalah was composed over millennia by an army of geniuses. But the deeper reason is that Kabbalah entails the truth of the whole of Jewish literacy, beginning with the Torah, and so kabbalistic truths are predicated on depths of Jewish wisdom that are simply out of reach for Western thinking, Heidegger’s included.

How did you meet with Peter Trawny ?

Michael Chighel: I was living in Jerusalem. I had read his Myth book. And I wrote a quick two-line note to Peter on Academia.edu expressing my admiration for it. The next day he wrote back to me to tell me he was coming to Jerusalem and would I like to meet for a coffee? I was of course delighted by the invitation and we met several times during his stay. I was his tour guide in the Holy City. We dined together more than once. One night he came over to my house and we had a long “farbrengen” over good Scotch in which I laid out my reading of Heidegger. He responded with extraordinary generosity. I am deeply grateful to Peter. He is a dear friend.

What are you expecting from the conference in Budapest ?

Michael Chighel: My one and only hope for the Budapest symposium is that Elliot Wolfson, Peter Trawny and I can attain something like a Socratic dialogue. Two minds are better than one, and three minds are better than two. What I hope our little “bet din” will be able to accomplish is a collaborative articulation of the Heidegger Question as a question for Judaism which will offer direction for Jewish philosophizing. I’m being ambitious, to be sure. But genuine hope is always ambitious.