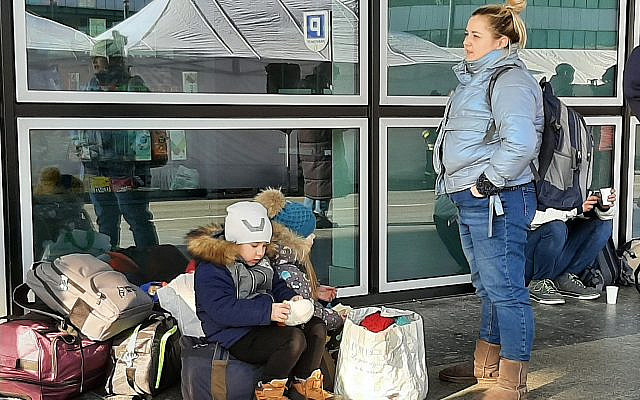 Ukrainian woman and child at the Warsaw train station awaiting their next destination. (courtesy)

“The sooner the better,” was my friend’s reply when I offered to come help her and her colleagues at the Jewish community of Warsaw. Like countless others in Poland, they had leaped in to help the hundreds of thousands of Ukrainian refugees fleeing into Poland since Russia began its war. We had known each other since the early 1990s when I’d spent time in Poland and Eastern Europe, including with the Jewish communities emerging from communist control. Since then I’ve worked with refugees, migration, conflict and development issues. I knew from experience that as critical as it is to address today’s emergency needs, they must also ready themselves for the longer-term needs of the refugees, which will multiply exponentially in the upcoming weeks, months and perhaps years ahead.

A few days later I was on the night flight from Tel Aviv to Warsaw.

En route, I met a fellow passenger also going to help, but with a very particular personal purpose: to find his mother- and grandmother-in-law, who had reached shelter somewhere in Poland, and bring them back to Israel. He left Ukraine, he tells me, at age 15. Now he is a middle-aged stocky man. “I feel a double loss,” he said in a quiet pained voice. “I always meant to come back and visit my hometown. I especially wanted to go to my grandfather’s grave. Now everything has been destroyed.”

As Russia’s assault on Ukraine continues, his story is one of millions of personal lived experiences of this tragedy.

On March 6, a few days before I got to Warsaw, 885,000 Ukrainians had already entered Poland. Ten days later more than 1.8 million refugees had arrived. The journey to the border often takes days, and is fraught with uncertainty, fear and hunger. It’s also relentlessly cold. Most can take little with them, leaving behind their lives, homes, belongings and loved ones, mostly men between the ages of 18 and 60 who not permitted to leave Ukraine. The authorities expect the men to stay and fight. Understandable on the one hand, but the human costs are high and can be indiscriminating. I heard of an autistic son and his father, his primary caregiver, who had tried to leave (what good could they do as soldiers?), but border guards wouldn’t let them exit. As such, 90% of the arriving refugees are women and children.

At the border points the Polish authorities are processing people quickly; on the other side various organizations and individuals have been helping people transit to various points in Poland. At the central train station in Warsaw big tents and a few rows of wooden picnic tables have been set up outside where refugees can get a bit of food and rest. Inside multiple information stands have been set up where refugees can learn where throughout the country shelter and assistance might be available. A large map of the country indicating towns and population sizes warns that the big cities are already overcrowded while small cities are better equipped to take people in. I wonder if that can really be the case. Dozens of volunteers in green vests walk around, helping as needed. When I am there it feels busy but not chaotic; but I know there are ebbs and flows to this tempo.

One man is handing out large sturdy plastic Ikea bags. “People are carrying so much stuff, and half of them are hanging onto a dozen little things at once,” he said, “so I figured this might be the best way to help.” He and work colleagues had pooled funds to get $5,000 worth of bags. As he says this I have flashbacks to the time I spent working with Bosnian refugees in the mid-90s. They all had similar large plastic bags from the local market to store whatever possessions they had; when they returned to Bosnia or moved to new lives in America, Canada or elsewhere many had nothing more than these same plastic bags to take their belongings with them. “One woman,” the man with the Ikea bags tells me, “just broke down sobbing when I offered her a bag.”

Many Poles are simply opening their homes and hosting refugees, total strangers, for the night, or even multiple nights. I hear of two young people who, since the early days of the refugee influx, leave their regular day job at 5 PM for the train station, where they stand until 2 or 3 AM matching refugees with ready hosts.

A young woman I met had signed up to be such a host. She lived in a tiny Warsaw apartment but she, her partner and her two cats were ready to share their space the living room couch with whomever needed. She was delighted when she finally heard she’d receive her first guests. But upon learning it was an older couple she felt it wasn’t respectable to let them camp out in the middle of the living room. So she moved the office furniture into the living room and the couch into the office to give the couple at least a little privacy. This is just one of countless stories of those helping.

Some 90% of Poles supposedly favor assisting their Ukrainian neighbors. Indications of this support are everywhere: little Ukrainian flags fluttering on passing buses, trams and trucks; stores with signs in Ukrainian welcoming refugees and offering free food and services. Warsaw seems decked in blue and yellow.

Many of the arriving refugees are in transit, as they have friends and family in other countries ready to host and help them. They need help for just a few days. But hundreds of thousands will stay: some only until the war’s end, whenever that might be; others until their destroyed homes and towns can be rebuilt and allow for return; and those for whom Poland will become their new home, though they don’t even know it yet.

The Polish government decided to extend the refugees full rights to remain, live and work for up to 18 months. This will make a significant difference in easing people’s situation regardless of how long they remain. Nonetheless, given that the vast majority of the refugees are women and children, tremendous assistance will be needed for housing, jobs and financial support, school integration. Refugee trauma will need attention, but will also affect their helpers.

The outpouring of support will not last forever. Exhaustion is already setting in for those working around the clock to help. Numbers of refugees will continue to increase. Even before the influx, I’m told, housing in Warsaw was hard to find. Sooner or later, some Poles will start to feel that refugees are taking their jobs, crowding their schools, and making their streets less safe. Generosity will vie with animosity.

And for all those ready to help, there are those ready to exploit and prey upon the most vulnerable. Traffickers have leapt in, taking advantage of the fact that these women and children are alone and either unaware or unable to protect themselves.

Today’s response — whether in Poland or any other host country — must be developed with these risks and issues clearly in mind, and with the goal of facilitating independence and integration, whether for the interim or long-term.

As for the Jewish community organizations I meet on the ground, the instinctive and institutional response is that while they must of course help Jewish refugees, they will also help anyone in need. Some, like at the Jewish community’s crisis center or temporary refugee centers, already look haggard or frantic from so many trips to the border, managing the overwhelming needs or absorbing the traumatic new reality of those who fled. During my week there some of those already run ragged by their aid efforts also fell ill with Covid.

But plenty of good mingles in with the dire. Many of the refugees are reassured and appreciative of the assistance; knowing this is rejuvenating. Organizations such as Hillel and the JCC have opened their beautiful communal spaces to provide a welcoming warm environment, food, daycare and other assistance; a sense of relieved calm and children’s laughter pervades these spaces for now. I join a Shabbat dinner at Hillel together with both Polish locals and newly arrived refugees from Ukraine. I can’t but help be moved knowing that while so many refugees on this Friday night are scattered throughout makeshift shelter, uncertain of what lies ahead, those with ties to the Jewish community can find at least a semblance of home in this space and time.

Internationally of course there has been a huge mobilization of support, from governments, businesses, philanthropies and individuals. It is extraordinary. Many of the people I met in Poland were deeply moved by the generous spirit behind those reaching out to help out.

But not all assistance is equal. Funds can be channeled to directly and rapidly target immediate needs. Other types of help, such as donated goods or outside volunteers, may not always have the intended effect. The trucks and planes of donated goods are heartwarming but also present complex logistical problems around storage, sorting, distribution and matching what’s available to what’s needed. Likewise, I keep hearing of local organizations swamped by well-intentioned offers to volunteer. Volunteers can play critical roles but that’s usually when they have the skills needed to address a specific problem, and an organization has the capacity to manage volunteer placements.

Most local organizations and international relief agencies must maintain a dual focus: meeting both the immediate emergency needs, while also preparing for the longer-term issues of housing, jobs, schooling, and psychosocial assistance. They must immediately ramp up their capacity, expanding both staffing and systems in order to manage the volume of refugees as well as the funding.

Given the tsunami-like nature of these refugee flows, the emotional human drama and twisted politics of this war, it is easy to feel overwhelmed, whether you are on the ground or a more distant observer. But we can’t allow for that. While we can’t simply put an end to the war or the suffering, there is a great deal which can make a meaningful difference.

What can you do? Donate. Advocate. Educate yourself beyond a superficial understanding of the situation. Help the refugees entering your own country (whether Ukrainian or otherwise — many who have long worked with refugees can’t help but feel a little bitter seeing the warm reception of white Europeans, which is often not extended to those from Africa or the Middle East). Or see go to your own country’s borders where you can help with the human dramas which often unfold there. Volunteer if you have needed skills, or when things are a bit calmer and organizations can manage such placements.

Just don’t stand aside because you think it’s not your problem, nor give up in despair because it feels too overwhelming.