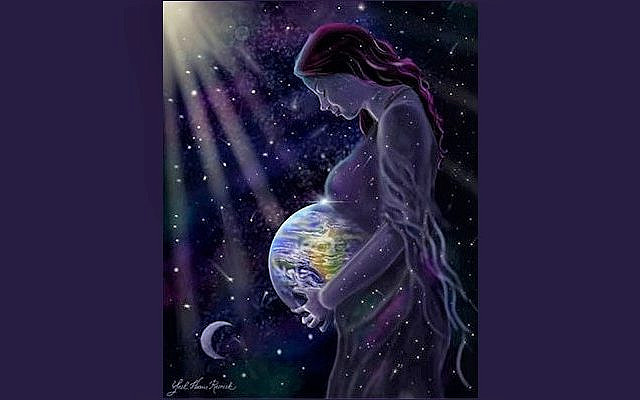 One of the prayer highlights of the Rosh Hashanah liturgy, recited following each series of shofar blasts in the Musaf service, is “Hayom Harat Olam” — “Today is the birth(day) of the world,” though the Midrash has the world actually being created on the 25th day of Elul and Rosh Hashanah coinciding with the creation of mankind. Interestingly, the term “birth” (harat), rather than “create” or “establish,” is used, to describe a specific date. This phrase is based on a verse in Jeremiah where the prophet curses the day he was born, preferring “that my mother would be my grave and her womb a place of eternal gestation (“v’rechma horat olam”). Why then do we make reference to gestation right after the blowing of the shofar?

Humanity, standing in judgment on Rosh Hashanah, can be compared to a woman in labor. She is in a period of flux, wavering between pregnancy and motherhood, while simultaneously facing a life-threatening situation. There is much pain, tightly entwined with the anticipation of great joy, as a new life appears. There is also trepidation: what will the future bring? From the onset of the pregnancy, the expectant mother turns her heart to God for the physical and spiritual well-being of herself and the fetus.

In Hebrew, “womb” and “mercy” share the same root – R.H.M. The pregnant mother protects, nourishes, carries, and attends to all the developing embryo’s needs. The pleas for mercy of the expectant mother mimics that of the penitent. Mankind is like the embryo in its mother’s womb, insofar as we are also entirely dependent on God for our every need. We plead with God to be merciful with us. Indeed, in the haftarah that is read on the second day of Rosh Hashanah, God is likened to the expectant mother responding with mercy to her child “…hamu me’ay lo, rachem arachamenu, neum Hashem” — “…my innards yearn for him, I will surely be merciful with him, says God.”

The Gemara points out that it was on Rosh Hashanah that God remembered the childless Sarah, Rachel, and Hannah, decreeing that these infertile women would conceive. Indeed, the Torah and haftarah readings on the first day of the holiday are the stories of barren Sarah giving birth to Isaac and barren Hannah birthing Samuel, with Rachel playing a key role in the haftarah mentioned above.

Why are Sarah, Rachel, and Hannah chosen from among other biblical barren women and connected specifically to Rosh Hashanah? Perhaps because of the way we can connect them with the Musaf liturgy, and its high holiday themes of Malchiot –– anointing God as King; Zichronot –– G-d remembering man’s actions; and Shofarot — the redemption through the shofar of the messiah.

Sarah personifies the individual who brought the knowledge of God to the world, parallel to Malchiot. She, along with Abraham, taught monotheism and opened her home to all seeking the wisdom of the monotheistic model. Rachel is all about remembrance and the benefit of that memory — Zichronot. First, God “remembers” her, answering her prayers on Rosh Hashanah, when she conceives Joseph. And then, as told by Jeremiah, she refuses to be comforted, in a heavenly scene, remembering her descendants who have been exiled. God specifically tells her not to weep, as He will remember her, and reward her by returning those descendants, the Jewish people to their land. Lastly, Hannah asks for a son in order to make God’s name great, and that son comes to represent the messiah. That is, Samuel, Hannah’s son, appoints King David, precursor of the messiah. Furthermore, in her famous prayer when she pleads with God to grant her desire for a son, she says explicitly, “…he shall give strength to his king and exalt the horn of his anointed” (Samuel I, chapter 2).

Perhaps more poignantly, one can argue that children born to women who had no prior possibility of motherhood are miraculous events, similar to creation — something from nothing. Moreover, teshuvah (repentance) can be seen as miraculous as well – for the capacity to avert the evil decree runs counter to the intuitive – and logical — “judgement for action.” God bestows upon humanity the possibility of undoing a prior act, despite the fact that it is counter to the natural world; that is, one can never turn the clock back, except through teshuvah.

A person awaiting judgment, as the Jewish nation is on Rosh Hashanah, is in an inchoate state, in the torment between innocence and guilt, between life and death. Past misdeeds appear as turbulent waves of pain and uncertainty, mixed with the joyous anticipation of the creation of a newly cleansed, repentant personality. One pours one’s heart out, petitioning God for mercy. When people repent, they create an entity that had not existed before in the current reality – not unlike the pregnant and birthing mother. Rosh Hashanah is a time to set right all that was distorted in our personal lives and in the world.

In a way, the shofar-blowing itself is an act of giving life. That is, we create sound where none had existed earlier by blowing life, as it were, as it were into an inanimate object. That sound meant to aid in our rebirth and in the beautifying of our souls. Alternatively, the sounds of the shofar could be compared to the sounds of childbirth while the shape, narrow at the mouthpiece getting progressively wider could resemble the birth canal. It is no accident that one of the famed midwives who helped save Israelite babies in Egypt under Pharaoh’s decree was named Shifra, with the root of her name aligning with that of the shofar: S.F.R. Her name literally means to improve or to beautify, and she herself certainly did that when she was protecting the children she helped bring into the world. By extension, Shifra helped the nation strengthen physically, while the shofar helps the Jewish people fulfill their spiritual mission.

The shofar, pregnancy and birth, as well as the New Year all represent potential. One has no way of knowing what the future will bring, yet there is excitement, and determination to make whatever it will be right, with the goal of achieving all aspirations, and maximizing promise. The matriarchs each had to deal with different forms of barrenness, preventing that blossoming, until miracles led to the births of their children, and through them, the birth of the Jewish nation. And in their footsteps, that miraculous gift from God, repentance, also has us giving birth to ourselves over and over again, each year, to fulfill the responsibilities that come with being God’s children, and to begin to maximize our potential on a day so pregnant with possibility.

About the Author
Dr. Chana Tannenbaum lectures at Bar Ilan University, Michlelet Herzog, and Matan. She has worked as a Jewish educator, in teaching and administration, for more than 30 years. She earned her doctorate at Yeshiva University, where she was also the recipient of the Baumel award, given to the most outstanding faculty member throughout Yeshiva University. Dr. Tannenbaum made aliyah with her family in 1997, moving to Nof Ayalon.
Related Topics
Related Posts