This is what it looks like when Women Wage Peace. Like the movement in which I am active (The Movement for the Future of the Western Negev) it was founded from the depths of pain during the summer of 2014 when our land once again was battered and raw, our lives in real and present danger on a daily basis. These are women who believe in working to bring about a viable peace agreement. They want to “restore hope and work towards a peaceful existence for (them)selves, (their) children and future generations ” and seek to prevent the next war. (From their mission statement) 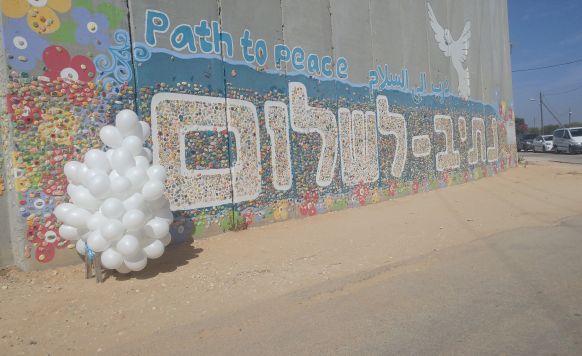 I went to show my solidarity yesterday, joining them at the “Path to Peace” in Moshav Netiv Ha’asara, a communal farming village right smack on the border of the northern Gaza Strip. I live CLOSE to the Gaza Strip but this community TOUCHES it. Which is why they have this wall. Humongous blocks of cement serve to separate between their lives and all that goes on in Gaza – both the bad as well as the good.

We heard the women of the movement talk about their hopes for peace.

Vivian told us that there is a group of women from Gaza who also want to wage peace and had planned to congregate on the other side of the border, armed with balloons for peace, as well, releasing them skyward at the same time as we did. Sadly, a few days ago they told her that they were afraid it would endanger them. But they are with us in spirit.

While there, we heard from Maha — a mother from Gaza – who spoke to us on the phone: “When you lose hope, things go out of control. …..I just want a normal life. Not all Gazans are Hamas. They took over Gaza by force. They want to keep control…. The situation here is grave, with no hope. ….”

Vivian from Beeri responded: “We have thousands of women all over the country who are trying to get both sides to reach a diplomatic agreement. We want to replant hope amongst Israelis and Gazans. It’s in all of our interests to live in security. We send you a big hug from all of us here.”

While this was going on, I was broadcasting via Facebook Live. I had people from around Israel and Gaza viewing, as well as friends from the US, the UK and as far off as Brazil! One of my Facebook friends from Gaza suddenly sent me the following message: “Say hello to Ms. Roni and to all peace-loving people in the world”

I went to seek Roni out, read her the message and with tears in her eyes she said: “He was one of the people who wanted to fly balloons on the other side — one of the women and men in Gaza who want to wage peace.’

Later on M. wrote the following: “Will we do …(fly balloons together) one day and celebrate (together) for peace
We are hand in hand to complete the way toward peace”

We then listened to Tsameret, who lives in Netiv Haasara, talking about their realities of life on the border — realities and concerns with which I am familiar. We all find our own ways of keeping a semblance of sanity within the often insane situation in which we live. She is a ceramics artist who devised a way to make the grey, imposing walls look friendlier, brighter, more optimistic. She also recruits others in her quest, enabling them to be a part of her dream of mastering the wall rather than letting the wall define their surrounding landscape. She makes ceramic tiles, of different shapes, with words of hope and peace in different languages. Each person chooses a ceramic tile, writes their own wishes on the shiny, colored piece of kiln-fired clay and adds it to the great mosaic for peace and hope. 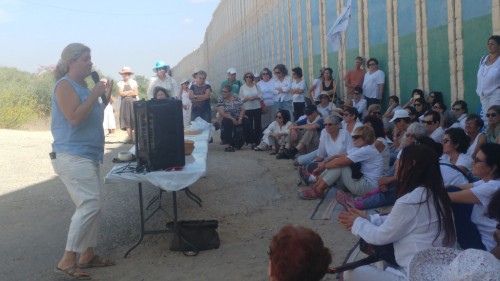 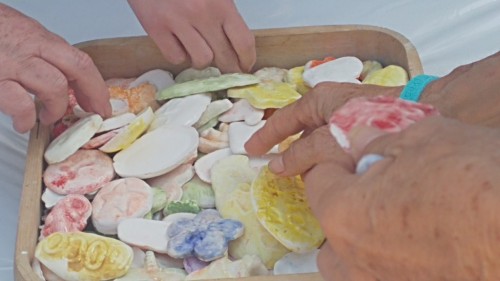 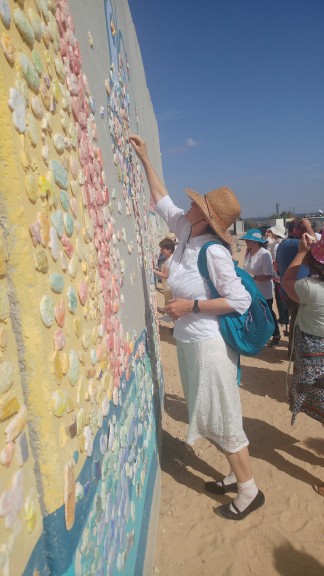 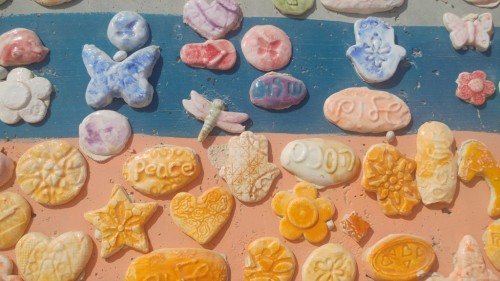 After adding them to the wall we stood in a circle, sang and on cue, released the white balloons, watching them until they disappeared. Watching until the only white balloons left piercing the blue sky was the intelligence-gathering balloon that floats perpetually on guard at the border. From Netiv Haasara, they continued to Ashkelon, and today: to Jerusalem. 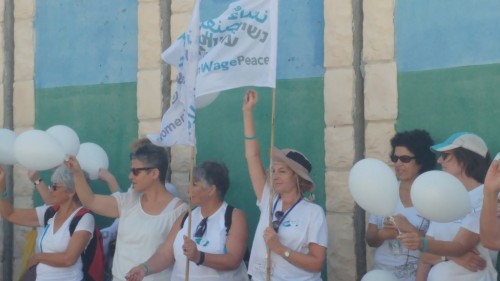 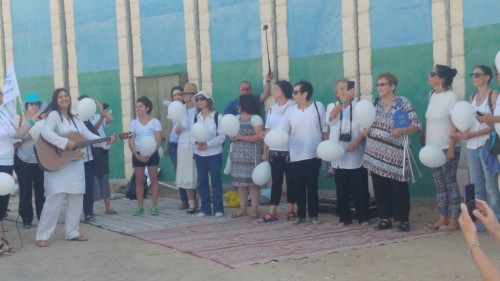 And all the while, a lone soldier stood guard on land: his back to us, his face towards Gaza and the sea, (because peace is still but a twinkle in our eyes) as the dog took his afternoon nap — unperturbed by the crowd of women passing by, waging peace. 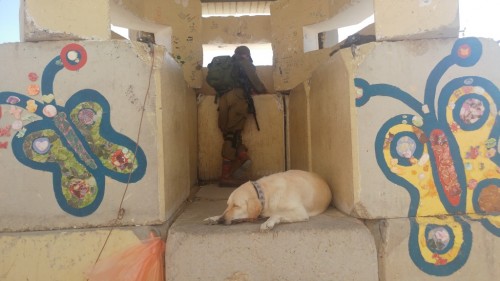 To learn more about this movement, go to https://www.facebook.com/WomenWagePeace/