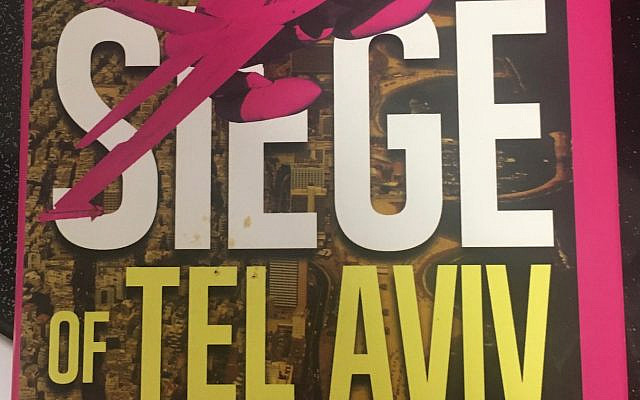 Hesh Kestin's The Siege of Tel Aviv was dropped by its publisher Dzanc Books in 2019.

Cancel culture got Hesh Kestin’s novel, The Siege of Tel Aviv, dropped by its publisher Dzanc Books last year. The pointless twitter drama made me want to read it, because anyone who tries to ban a book they haven’t read is an idiot. So-called ‘woke’ folk on twitter were calling for a boycott just based on the description of the book and the first 100 pages, accusing it of Islamophobia. But if you read the novel from beginning to end, the author goes after every group almost equally—including Jews.

But let me not get ahead of myself, for I must clear up a few things before we continue. More than anything, I believe in literature as a force that can drive positive change in the world. It’s my religion. Storytelling is how humans communicate. Literature has the power to spread empathy by allowing us to step into someone else’s shoes for a little bit so we can explore the world through other eyes. Understanding starts with being able to project yourself into someone else’s life—even a mortal enemy.

I will not go into too much detail regarding the real life ongoing conflict except to say that I do come to this review with a slight bias since I am of Palestinian decent. So I will lay out my cards now: I am not an expert on the Middle East and I have never traveled to Israel. One of my best friends travels to Israel a lot and even has family there. A lot of what I know, I’ve learned from him. For me, some of my biggest literary influences are Jewish writers —Isaac Bashevis Singer, Delmore Schwartz, Franz Kafka, and Saul Bellow. At the very same time, I of course share sympathy and solidarity with my Palestinian people and I am against the illegal building of settlements. Yet at the same time, family lore says that I have a great Jewish grandmother on my mother’s side. Then you add the fact that I was raised Catholic and born in Latin America, and you will see that I did not read this novel through just one lens, but a kaleidoscope. My point being that I am not an absolutist, I can reconcile my love of Israel with my desire for a self governing Palestinian state based on Democratic ideals.

If you read Hesh Kestin’s novel closely from the Author’s Preface to the end you will realize that this novel despite its many missed opportunities is a work of art that also acts as an exercise to mourn. When you consider that as you read it, you’re willing to forgive even the most exaggerated plot points, caricatures and fantastic events indeed because of that eloquent Author’s Preface. The preface broke my heart as I read it, and I didn’t start the book until a few days later because I just had to really think about it. I felt the pain that he felt, and the anger, and it is the same exact pain that a Palestinian family feels when they lose a loved one. This book is the work of a little kid with a huge imagination, mourning his brother.

With that out of the way, let’s jump into the story. For at the same time that you have to suspend your disbelief that the USA will not come to the aid of Israel and that millions of Palestinians will just disappear and that Islam is a monolith, you also have to grant that Israel does indeed live under existential threat daily. That’s what reading Kestin’s novel is like—you basically have to hold two opposing views together and somehow by the end of the novel he helps you reconcile them with a fantastical story. All of this could happen and has happened many times before.

Yet still with all that personal history, I was still wincing quite a bit while reading TSOTA. This book got me feeling all types of ways; from anger to elation to happiness, to excitement—I was pulled in many directions. At times I felt like I was reading a novelization of the Will Smith movie, Independence Day, and the aliens were the Muslims being led by Iran. And let’s discuss this five nation Muslim army; they actually fared better than the Jews as far as depiction. There were more Jew stereotypes thrown around than any other ethnicity, albeit mostly by the character of the US President that isn’t too different from the one currently occupying the oval office.

And what is the premise of TSOTA? The premise is that Tel Aviv is turned into a Jewish ghetto after a surprising and devastating invasion of Israel by five Arab armies led by Iran. Six million Jews are about to be massacred by the Muslim armies in a fashion echoing many historical wars between Arabs and Jews, in their mutual persistence to permanently removing their neighbor from that area of the world. It’s a complex subject that in this novel is treated like a Hollywood disaster film e.g. Earthquake, The Poseidon Adventure, and The Towering Inferno. You know the ones, where a rag tag group of players from all walks of life unite to overcome the aliens or the natural disaster or the terrorist act or, in this case, the Muslim horde.

The most uncomfortable parts of TSOTA are the references to the Muslim armies taking a page from the Nazi handbook in order to terminate all the Jews holed up in Tel Aviv. It was mentioned so much, that it became unnerving like if Kestin was trying to monkey wrench the similarities with the Holocaust. Even one of the main heroes is compared to Churchill. Every time the Nazis were mentioned, it felt to me a somewhat weak, heavy-handed reference to Arab nationalist Fawzi al-Qawuqji who allied with Nazi Germany during World War II.

But Hesh Kestin is quite fair in his caricatures since Israel’s BFF the good old US of A is given a pathetic and very laughable depiction. Like previous Middle Eastern wars involving Israel, the USA tries to stay away to the point of even letting Israel disappear into the annals of history. Somehow, I found the depiction of the USA and its leaders more insulting than that of the Muslims. I’m not surprised at the treatment, for America’s relationship with Israel despite its closeness has always seemed fickle.

I could say that the biggest miss in TSOTA is that the humor is not consistent. The funniest moments are when Kestin is depicting the US President fumbling about worried only about his reelection; a very accurate portrayal of a Dubya like leader. There are also interesting, comical characters like Alex, the Israeli combat ace who also enjoys cross-dressing. The humor is not sufficient enough though to sustain a satire in the tradition of Catch 22.

But my favorite parts of TSOTA is when Kestin is writing about Israel. Even when describing a street or people going about their lives, his prose is masterful. When he’d jump to the USA, mostly depicting the POTUS, he lost me a bit with the humor that was a bit jarring. The Israel parts made me want to read his previous novels like The Iron Will of Shoeshine Cats and The Lie.

Evangelicals are going to love this novel for it confirms every stereotype they have about Jews, Arabs and Muslims and the coming of Jesus. They will love it so much, that they will feel a tinge of sadness at the end when Jesus doesn’t make an appearance. They love Israel so much, believers like VP Mike Pence I’m sure pray that Israelis will soon accept Jesus once he comes back. It will all work itself out I’m sure.

And what about the Palestinians, how do they fare in this fantastical thriller? Not too bad, except for their disappearing act. They’re hardly mentioned throughout the novel until the last quarter. About 75% of the three million Palestinians in Gaza and the West Bank are “depopulated” by the Muslim army only to be assisted by their Israeli cousins towards the end of the novel in the establishment and protection of a new Palestine, albeit not exactly where Palestine used to be but hey, the best literature should never have a perfect resolution. This gave me hope. And if a novel by a former Middle East foreign correspondent can be hopeful that Israel will find peace with their cousins, then I wholeheartedly recommend it to everyone. Bravo Mr. Kestin, I salute you.

This review was originally published at Expat Press, JULY 17, 2019

About the Author
Fawzy Zablah was born in El Salvador but raised in Miami. Among his works is the short story collection CIAO! MIAMI and the novel RARITY OF THE CENTURY. His fiction has been published widely at Hobart, 3AM Magazine, Acentos Review and Expat Press. His short story, THIS MODERN MAN IS BEAT, was adapted into an award winning short film in 2015 currently playing on Amazon Prime. He is hard at work on a novel about the Arabs and Jews of Latin America with the working title of GITANES.
Related Topics
Related Posts
Fawzy Zablah
Comments