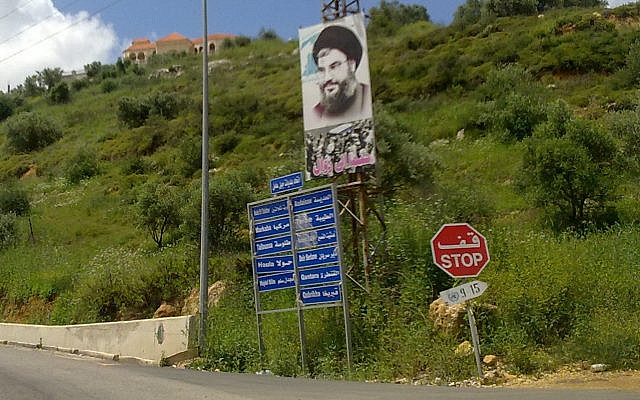 Poster of Hezbollah leader Hassan Nasrallah at a street intersection in the village of Kafr Kila in the south of Lebanon (credit: ansam61@hotmail.com / Wikimedia Commons).

Lebanon is now in a deep financial and political crisis, and its people are starving. They barely survive thanks to outside support by relatives or charitable organizations. Yet Hezbollah finds the need to attack and threaten Israel, adding the threat of war on top of everything else that the Lebanese people are suffering from.

How did Lebanon get to this? If you ask any Lebanese person this question, you will most likely hear that corrupt Lebanese politicians brought Lebanon to this point. It’s a safe answer. There are indeed corrupt Lebanese politicians. They are probably all corrupt to some extent. The Lebanese economy relies heavily on patronage. It’s almost impossible to go far in politics or in business without it. But Lebanese politics has been corrupt for decades yet Lebanon survived more or less. Today’s total collapse of Lebanon is due to far more than political corruption. It is due to a cancer that is eating the country from inside, Hezbollah.

Hezbollah is a Lebanese political party and terrorist organization that appears to have been founded in the early 1980’s in response to Israel’s invasion of southern Lebanon, which was a response to terrorist attacks from Lebanon against Israel and which started in June 1982 and ended in June 1985. In one of its earliest terrorist activities, Hezbollah is believed to have been involved in the attack against the US Embassy in Beirut on April 18, 1983.

But after Israel’s withdrawal, far from disappearing, Hezbollah only grew stronger, and it continued to use Israel as justification for its existence. In July 2006, it provoked another war with Israel, causing hundreds of civilian Lebanese deaths and extensive damage to Lebanon’s economy and tourism industry. Since then, it has threatened Israel on numerous occasions, and recently, while Lebanon is starving, Hezbollah launched rockets against Israel, raising the fury of some Lebanese villagers.

But Hezbollah is now well beyond needing Israel to justify its existence. It is now a formidable organization and regional power that has tentacles all over the world.

Hezbollah is believed to be responsible for a string of assassinations (this list doesn’t include assassination attempts), including but not limited to:

Hezbollah is also accused of perpetrating the AMIA/DAIA terrorist attack in Argentina in July 1994 that killed 85 people and injured hundreds.

Hezbollah portrays itself as an enemy of corruption in Lebanese politics, but far from being honest, the party itself is deeply corrupt. As part of the system of Lebanese corruption, Hezbollah is partly responsible for Lebanon’s economic collapse, but its impact is far more pronounced than other political parties because unlike other political parties, Hezbollah has its own army and consequently a huge influence on Lebanese politics. Hezbollah’s corruption extends to the Lebanese financial system, transportation, and healthcare from which it diverts funds. Nothing happens in Lebanese politics without Hezbollah’s approval, and in particular, Hezbollah stands in the way of reforms that could help Lebanon recover.

Lebanon’s collapse should not have been a surprise to anyone who observed Hezbollah’s behavior in the last four decades. There has been many warnings, most notably the giant explosion at the port of Beirut in August 2020, after which, John Daniel Davidson wrote, “If there’s one group that bears primary responsibility for the state of affairs in Lebanon that led to the explosion in Beirut, it’s Hezbollah”. August 2020 looked at the time like Lebanon’s lowest point, worse even than the Lebanese civil war, but Lebanon has only gone downhill since then. A month ago, Canada’s Globe and Mail warned that “Lebanon is dying”, but the downhill slide continues still.

Baria Alamuddin, an award-winning journalist and broadcaster in the Middle East and the UK, wrote in December 2020, “I’ve always been proud to be Lebanese, but it’s a source of intense shame when the world sees our beautiful nation hijacked by Hezbollah’s corruption, criminality and terrorism.”

But not only is the collapse of Lebanon the fault of Hezbollah, it was also its objective because as Avi Issacharoff wrote, “The weaker the country, the easier it will be to influence and control what happens in it”. Hezbollah, using Iran’s help and its own formidable earnings from criminal activity, can now control Lebanon more than ever, providing its own social services and health facilities to gain the trust and support of an exhausted and frightened Lebanese population.

Like a cancer that weakens and eventually kills a body, Hezbollah has slowly gutted Lebanon and rendered its institutions meaningless. Lebanese billionaire Najib Mikati is still attempting to form a government, a month after he was appointed to that task. Before him, Saad Hariri tried for nine months to accomplish the same task but failed. Upon giving up, Hariri called that moment a “moment of truth”, but what truth? The truth that forming a government no longer matters because the power is all in the hands of Hezbollah anyway? Perhaps Hariri would have said so if he wasn’t afraid to meet the same fate as his father.