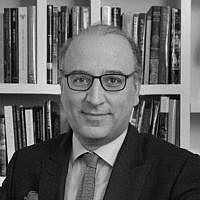 The Blogs
Hicham Aboutaam
Apply for a Blog
Please note that the posts on The Blogs are contributed by third parties. The opinions, facts and any media content in them are presented solely by the authors, and neither The Times of Israel nor its partners assume any responsibility for them. Please contact us in case of abuse. In case of abuse,
Report this post. 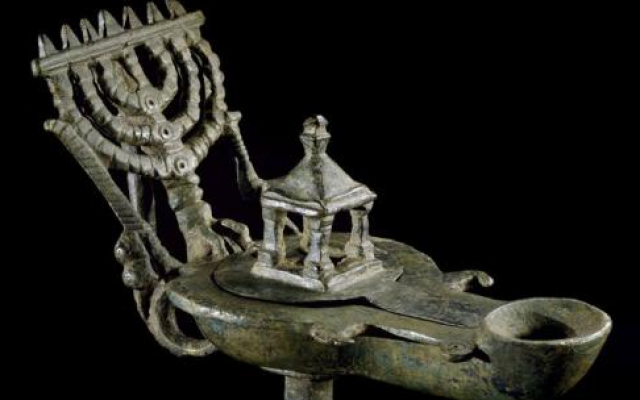 Jewish bronze lamp with the handle in the shape of a menorah / Museum of Fine Arts, Houston

Artifacts are a window to history. I’ve always found my work as an antiquities dealer so fascinating for exactly this reason. While there is much to be said for admiring a work of art for its aesthetic beauty, that admiration grows so much deeper when you realize the journey the artifact has made through the ages, and the story that it tells. One such artifact that came through my collection at Phoenix Ancient Art in 2003 was a Judaic oil lamp. And what a story it has to tell.

This Jewish oil lamp dates from 400-600 AD and is made of bronze with the handle in the shape of a menorah. It is set on a stand of which only the base is preserved. The cover knob is in the shape of the tabernacle and the menorah is supported on each side by Jewish symbols: the budded staff of Aaron on the right and the horn (Shofar) on the left. Archeological sites commonly find ceramic oil lamps from this time period that were used for everyday functions. The fact that this lamp was made of bronze and not ceramic would indicate that it was elevated for special purposes, typically for that of the synagogue or for communal use. Oil lamps of this sort were widely used from the fourth or third millennium B.C.E. until the creation of gas, and then electric lighting, as they allowed people to illuminate their environment and do so portably.

In 2005, we sold the lamp to the Museum of Fine Arts, Houston, where it now resides. At the time, this was important for the museum for many reasons. It was a significant historical object to be adding to their holdings; it also helped bring the Jewish community together in that part of Texas by attracting more Jewish visitors and, eventually, significant donors to the museum.

These oil lamps were typically decorated with symbols that represented various aspects of Jewish life. Many bronze oil lamps have been discovered during excavations in Israel and have shofarot, menorahs, or Torah shrines as decorative pieces. They might also have pomegranates, birds, lions or fountains. One fascinating discovery in the City of David was an oil lamp with half of a grotesque face as decoration. All of these symbols show something about the people of the time, their religious practice and their self-expression.

According to Dr. Yuval Baruch of the Israel Antiquities Authority, “Decorated bronze oil lamps were discovered throughout the Roman Empire. For the most part, such oil lamps stood on stylish candelabras or were hung on a chain. Collections around the world contain thousands of these bronze lamps, many of which were made in intricate shapes, indicating the artistic freedom that Roman metal artists possessed.”

Certainly, the menorah on this oil lamp, currently part of The Museum of Fine Arts in Houston, is a central tenet of Judaism. The symbols carved into such antiquities offer an incredible insight into the time period and the thoughts and actions of the people.

In our current collection we have three other examples of oil lamps from the period, all ceramic, featured in our Sacred Scents and Flames from the Ancient World publication. One has a menorah and is dated from the second half of the 5th century A.D (#72). Its existence helps to show the continuity of the Jewish community in the Orontes Valley well after the Apamea synagogue was converted into a Christian Church in 420 A.D. Another oil lamp in our collection from the second half of the 5th century A.D. shows the sacrifice of Isaac. The clothing, the action and the depiction all offer incredible insights into the Torah and its importance in the lives of the people at the time (#68). One more example in our collection shows the story of the three Jews before Nebuchadnezzar (#66).

These exquisite artifacts allow us, thousands of years later, to understand how fire was used and contained, how people interacted in their private and public lives, and how they related to religious and cultural symbols.

About the Author
Hicham Aboutaam is the co-founder of Phoenix Ancient Art and the owner of Electrum, the exclusive agent in New York. He grew up surrounded by antiquities and built a strong passion for gems and seals at a very young age. In addition to working with renowned museums and established collectors, Hicham enjoys educating and advising aspiring collectors.
Related Topics
Related Posts
Comments