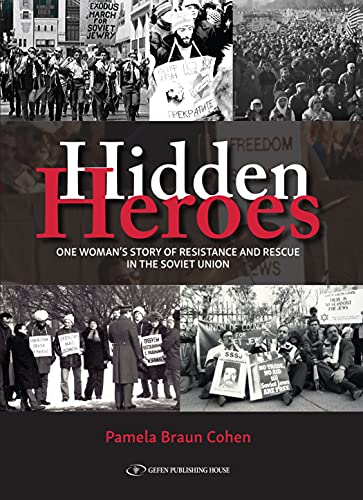 I’ve read many great books, but it’s rare that I have the urge to thank the author.  In the case of “Hidden Heroes,” I wanted to do so on two levels: to thank Pam Cohen for her outstanding recounting of details of the struggle to free Soviet Jews, and for her incredible role in making so much of the outcome about which she’s recounted possible to begin with.

One of the beautiful things about “Hidden Heroes” is that while recounting her experiences, Pam interweaves stories of the lives of many of the refuseniks on whose behalf she advocated.  Far from writing a first-person story about what she did, Pam reflects about her journey starting in 1970 and credits many peers and colleagues with whom she worked as the leaders of the Soviet Jewry movement.  Underscoring this, she even relates how she had to be coaxed to write in the first person at all. “Hidden Heroes” chronicles and overlays both the historical context of the Soviet Jewry movement and personal experiences as nobody else has, and as few could.

By interjecting herself into the experiences, she makes the book personal, relatable, and much more than just an historical account of the movement in which she, I, and many others around the world, were engaged.  Had it not been for leaders like her, half a generation later I might not have known about much less had the privilege to be active in the struggle myself, as one of the students among many “students and housewives” that the KGB pejoratively described the movement, not realizing the power such a worldwide group could wield. She and others set the pace, and many followed.

For thousands of years, the Jewish people have recounted the Exodus from Egypt not just with a weeklong celebration at Passover, but in our Shabbat and even daily prayers.  That we were once slaves, and were liberated, is a central part of our historical and religious identity and DNA. In both the Biblical Exodus and the modern Soviet Jewish exodus, about two million people left bondage and persecution.  Both took place over some four decades.  The Biblical Exodus recounts God, working through Moses, actively and miraculously liberating the Jewish people.  The exodus of Soviet Jews is a story of average people called to play an active, sometimes superhuman, role in a story that did not reveal God’s hand the same way, but is no less historic, or Divine. While we remember and celebrate the former, there’s a risk that the later exodus may slowly be forgotten.

Even as a student activist myself, decades later it’s jarring to recall, how horrible life was for Soviet Jews.  For someone who knows to be shocked by the details about which Pam reminds us, it is all the more vivid how a whole generation has passed and many of our children and grandchildren don’t even know that there was a place called the Soviet Union, much less how much Jews were repressed and discriminated against there. The modern exodus is no less significant than the original Exodus. It’s a part of our history around which we do not have a special meal or story through which we recount it. Just as children play such a central role in the Passover seder, it’s one that we cannot forget, or let our children forget. That makes “Hidden Heroes” an all the more important record of this era and the heroic efforts that defined it.

The Soviet Jewish exodus was also against all odds. Who could have predicted that the sum of all the grassroots efforts would have been as successful in ultimately freeing the Jews of the Soviet Union from their persecution that took place daily in every facet of life. 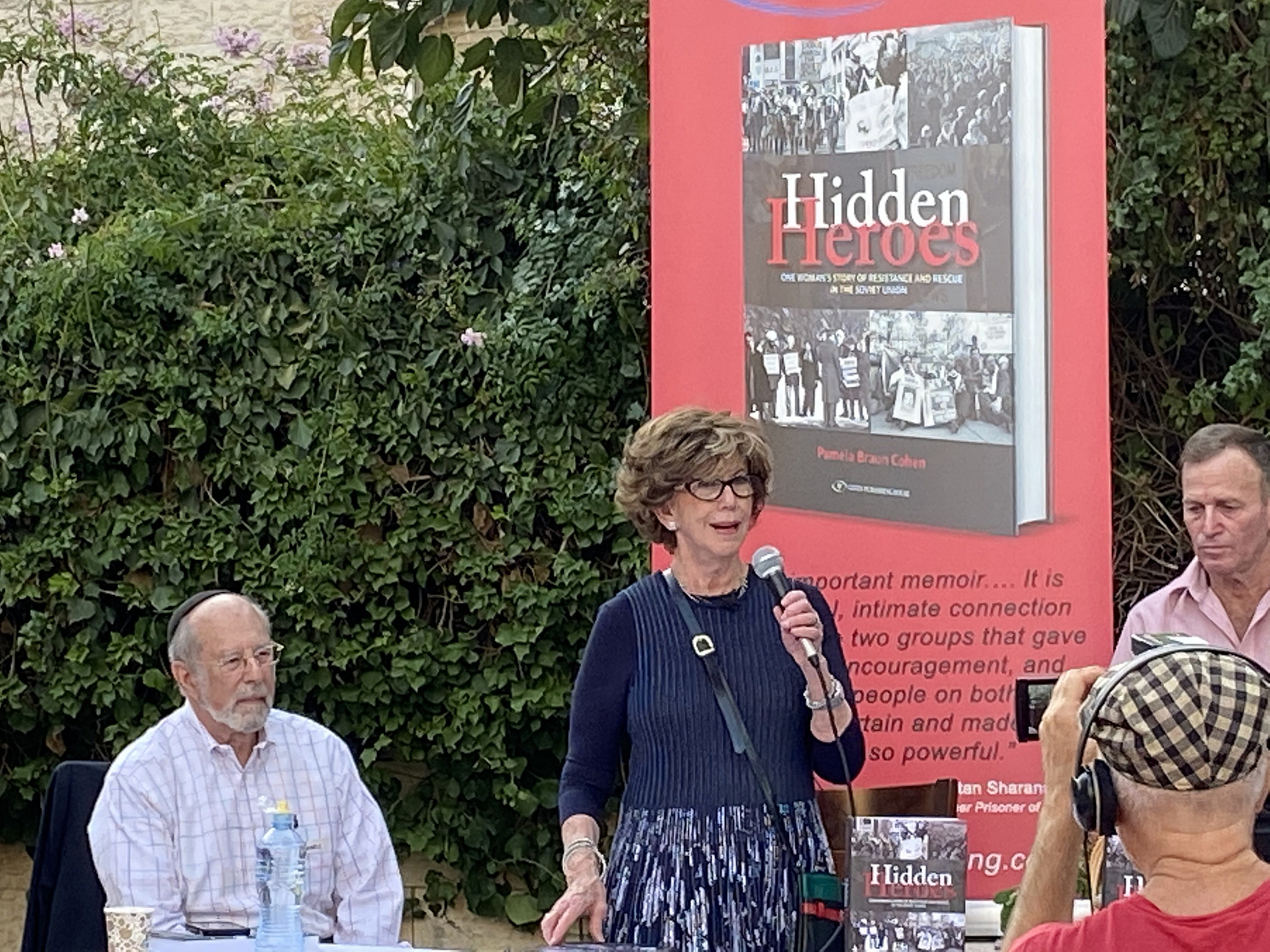 Pam Cohen at the book launch for Hidden Heroes in Jerusalem.

Unfortunately, fighting against the Soviets was not the only challenge. Pam candidly recalls the conflict between grassroots activists and “the Establishment,” not just in terms of tactics but in terms of very legitimacy, with the later blocking and preventing the former from access to and participation in global forums. She recounts the conflict between activists who just wanted to get Jews free, and those who sought to limit Jewish emigration if the Jews weren’t immigrating to Israel. It’s an awkward part of the story, even an airing of dirty laundry. But it’s something that needs to be exposed as a part of that history, and maybe something to learn from in the future. Pam Cohen is best qualified to do so, both in terms of her honesty, and in the context of the greater struggle in which she and so many others were involved.  (You can listen to a conversation with Pam Cohen discussing these, and a wide range of other issues here.)

“Hidden Heroes” is critical to recount this important chapter in the history of the Jewish people. It is important so that this part of our history is not only not forgotten, but celebrated.  It’s far too easy to imagine a time not far off, that the persecution which Soviet Jews suffered, and the heroism of both the refuseniks and Prisoner of Zion activists as well as that of the leaders of the Soviet Jewry movement globally, could be forgotten, whitewashed, or globalized.

I experienced this directly regarding my own Soviet Jewry experiences. In early 1988, I was contacted by a TV producer in Los Angeles to make a movie about my story which had been featured on national TV in the US. Six months later, my story was no longer of interest because of the fear of it being considered “anti-Soviet.” It was astounding to think then, at a time when the Soviet Union was still antisemitic and prevented Jews from leaving, much its denial of broader human rights, that anyone would be concerned about telling a story that would be perceived as anti-Soviet.

“Hidden Heroes” is an engaging personal historical account and reminder for us all.  If you celebrate Passover once a year, you should read “Hidden Heroes” at least once.

Do you have a story of your own Soviet Jewry activism that you want to share? Please email SovietJewryStories@gmail.com.