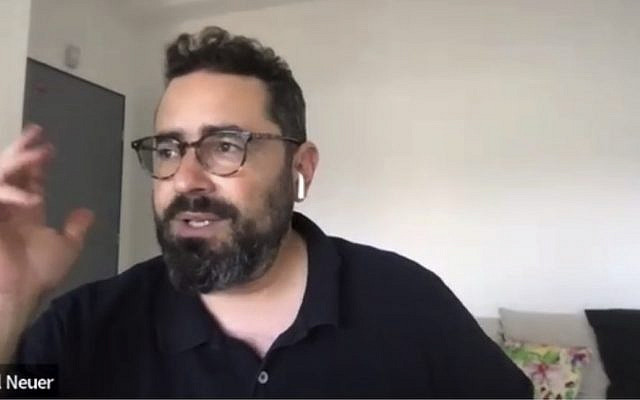 Hillel Neuer is leading an increasingly intense battle against mission creep, corruption and anti-Israel bias at the United Nations.

As Executive Director of UN Watch, the human rights NGO based in Geneva, his microphone or video link has been switched off mid-sentence at the whim of the Chair.

More recently, ‘requests to speak’ during ‘interactive dialogue’ have been blocked point-blank in what he calls an “impossible result”.

But the diplomatic fight has ticked up a notch. Top of Hillel’s agenda now is to disband the Pillay Commission, which he compares to the “Spanish Inquisition“ and a “Stalinist show trial”.

“Navi Pillay was appointed to ensure a guilty verdict against Israel, to label it an Apartheid state with the UN’s imprimatur”, says Hillel.

After the 11-day Hamas-Israel war of May 2021, the Palestinians and Pakistan, on behalf of the Islamic group of states, initiated an emergency session of the UN Human Rights Council and succeeded in creating another Commission of Inquiry which targets Israel and incentivises Hamas.

“But this one”, explains Hillel, “is unprecedented. Its scope includes not only the 2021 Gaza War, but all events leading up to it, and since. They also have the broad mandate to examine “root causes” of the conflict, including alleged “systematic discrimination” based on race”.

Whereas all past inquiries on Israel lasted for about a year, the timespan for this is open-ended, set for forever.

UN rules require that commissioners be impartial, but Pillay’s track record suggests the opposite. On repeated occasions, the South African former UN High Commissioner for human rights, has branded Israel an Apartheid state. She has even signed petitions lobbying governments to “Sanction apartheid Israel.”

And he says we can demand an end to this perpetual inquiry, by signing the UN Watch petition.

Hillel’s often the lone voice in Geneva warning Western governments against a weakening of resolve, urging our leaders to standup to dictatorships who use the UN as cover to commit the worst abuses of human rights.

Since 2009, Hillel’s headed the annual Geneva Summit for Human Rights and Democracy, a renowned international gathering providing a global platform to courageous pro-democracy dissidents from around the world who put their lives on the line to demand fundamental freedoms in oppressive regimes.

I was privileged to have been part of it when Hillel asked me to host and interview the session with Farida Khalaf, the Yazidi girl who escaped ISIS.

In this important episode of Jonny Gould’s Jewish State podcast, Hillel joins me to explain how the human rights function of the UN has become so mired in disrepute.

“There’s a revolving door between NGOs like Amnesty International and the UN human rights office. What you get as a result is a reluctance by such groups to ever call out abuses by UN bodies hijacked by Col. Gaddafi, Castro, Putin, Xi Jinping and the House of Saud”, he explained.

Hillel hails from Montreal, Canada, a city divided by two languages, English and French. My first question to him was whether this put in him good stead for his diplomacy work and Geneva’s French language landscape? I thought it was an easy opener for our interview, but what I got back was surprisingly deeper than I thought. Should I be surprised that language is fought over in Canada? It is, after all, the nation of Jordan Peterson too.

Hillel Neuer is, without doubt the world’s leading Jewish diplomat working outside of Israel. His work in defence of the intended values of the UN is essential and support for him and his team is key.

And in confronting the UN’s worst excesses on a daily basis, he is most definitely on the frontline of conflict.

About the Author
Jonny Gould is a TV and radio journalist and broadcaster. He’s a presenter on TalkTV and a contributor to Israel’s i24News. On Sky News and the BBC, he earned a reputation for outspoken views on Israel and antisemitism rarely voiced in UK media. Jonny’s podcast on Jewish and Israeli stories has emerged as Anglo-Jewry’s go-to-interview show. “Jonny Gould’s Jewish State”, launched in 2018, is a window into the dynamic of world Jewry and Israel and serves as the podcast of record for its biggest events.
Related Topics
Related Posts