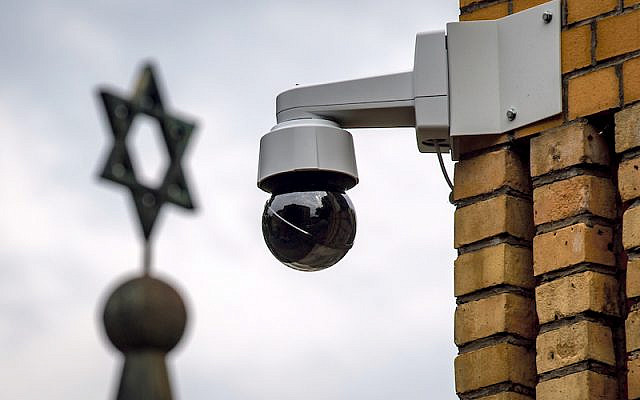 A surveillance camera can be seen next to a Star of David (Photo: Hendrik Schmidt/dpa-Zentralbild/dpa) via Jewish News

Thank goodness Rabbi Rafi Goodwin wasn’t seriously hurt when he was attacked recently by two yobbos outside his Synagogue in Chigwell. The two accused are in prison, charged with grievous bodily harm, which is a serious offence. The judge is likely to throw the book at them.

What has been heart warming, though, is the positive outpouring of support for the Rabbi by all sections of the non-Jewish as well as the Jewish community in Essex and beyond. As an excellent result, the Synagogue has vowed to do more to be of help to the locals, though they’ve done a lot in the past.

Nothing changes though; we are approaching the 110th anniversary of the only pogrom ever seen in Britain in 1911 in Tredegar in Wales. The economy there was in ruins, there was a lot of unemployment and some Jewish employers were paying their workers with vouchers which could only be used in an artificially high priced company shop; the infamous Truck system.

On a Friday in August there was a riot, with the windows of Jewish shops smashed and looted. In Eastern Europe at the time, the authorities would have done nothing, but this was Britain.

So the Magistrate came onto the street and read the Riot Act. This was a 1714 law which forbade more than twelve people to gather together or face punitive action. As the rioters took no notice, punitive action followed. The Bobbies charged the rioters with such severity that the rioters complained of police brutality. The Worcestershire Regiment was called upon to send a detachment from Cardiff to help the police. It was all over in 48 hours.

The local council then apologised and put a penny on the rates to pay damages to those who had had their premises damaged.

The Jewish community naturally felt threatened, but their neighbours took them into their own homes and looked after them. Many of the rioters were charged with various offences and there was an appeal for them to escape prison. The Home Secretary at the time was Winston Churchill and he gave instructions that there should be no excuses; the prison sentences would stand.

The authorities were, nevertheless, embarrassed. This sort of thing didn’t happen in Britain. Everybody found excuses, including the Jewish authorities.

The Brits behaved then as they behaved in Chigwell in 2021. It is understandable that members of the community are fearful as antisemitic incidents increase. The people of Chigwell, however, are representative of the vast majority of the country. The voters in the last General Election showed exactly how they felt about a political party which was found guilty of racism.

There are over three million Moslems in this country and they suffer more from racism than we do On two occasions they have sent dossiers to the prime minister listing 300 alleged Conservative anti-Moslem incidents and asking for the Equality and Rights Commission to investigate, but with no result. Anti-Sikh incidents have gone up 70% in the last two years. As Coronavirus apparently started in China, there has been a great increase in. anti-Chinese incidents.

The fact is, however, that these crimes are committed by a tiny minority of the population, and the cases remain primarily graffiti and verbal abuse. The government has more committees looking into the problems than they have hot dinners – probably cooked by immigrants – but one of our great traditions is to welcome strangers to our shores.

Incidentally, this shortage of staff in the Hospitality industry, As long ago as 1970 we appealed to the Home Office to let us solve the same problem by admitting Filipinos. Tourism is a very important part of our economy in normal times, and the Home Office accepted the need. Over the last fifty years, thank goodness for the Filipinos. That’s just one contribution immigrants have made.

So can we please keep things in proportion. There are irritants involved but not disasters.