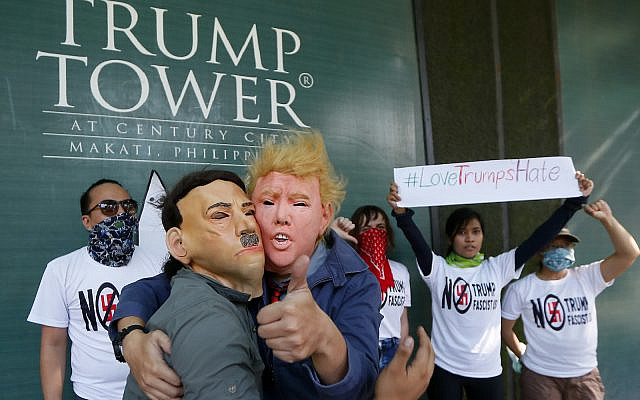 Protesters, with one wearing a Donald Trump mask and another with an Adolf Hitler mask, embrace as others display a #lovetrumpshate hashtag during a brief picket at the Trump Tower hours after Trump was sworn in as the 45th President of the United States Jan. 21, 2017 in the financial district of Makati city east Manila, Philippines.(AP Photo/Bullit Marquez)

Times being what they are, comparing anyone to Hitler or the Nazis is likely to score you “likes” as well as “forwards” on social media. So people keep doing it. It’s hard to resist – what better example do we all know of really-disgusting, super-bad, morally-offensive no-goodniks? Thus we get everything from the Soup Nazi that haunted George on Seinfeld to the “grammar Nazis” who dare to correct students’ faulty spelling and grammar to the “feminazis” who so offend Rush Limbaugh to both Turkish President Recep Tayyip Erdogan and UK Prime Minister Boris Johnson comparing their EU opponents to Nazis.

Recently, people, including none other than Arnold Schwarzenegger, have been comparing the invasion of the US Capitol to Kristallnacht (Night of Broken Glass) in 1938, when Nazis in Germany torched synagogues, vandalized Jewish homes, schools, and businesses, and killed close to 100 Jews. Yes, both events involved vandalism, violence, and orchestrated propaganda. But the much more accurate historical comparison is Hitler’s Beer Hall Putsch of 1923. That attempt at taking over a state capital was foiled by the police and taught Hitler that he was more likely to succeed in destroying German democracy from within the system – which he did after becoming Chancellor in 1933.

The Traditional Case against Holocaust Analogies

There are a number of well-known problems with using Nazi analogies for what one considers “really wrong” and “really right.” First, they often trivialize a unique historical tragedy. We can laugh at such unbalanced judgment from a fictional character like George Costanza, but it’s dangerous to have Rush Limbaugh implying that feminism has ever done anything as wrong as murdering 10 million people.

Second, these analogies are distracting. Once Hitler and the Holocaust are “in the room,” so to speak, some people are going to be too fired up to carry on a reasonable discussion of whatever the real issue was supposed to be.

Third, they unrealistically raise the stakes. Most of the political issues we need to settle are nowhere near so ethically clear-cut as, say, the Holocaust or American slavery, and therefore should not be framed in such extreme black-and-white terms.

Fourth, Nazi analogies are now so common as to suggest that the people who use them aren’t even thinking about the comparison they’re making. One indication is that we now often hear both sides of political divides comparing each other to Nazis. For example, President Donald Trump’s policy announcements prompted comparisons to Hitler, precisely while he, Trump, was busy comparing US intelligence agencies to Nazis.

But there’s more to it today than even that. Nazi/Holocaust analogies simply can’t work very well anymore because today’s audience is both number and dumber.

Number. Not only are these analogies way too overused, they are quickly losing their quality of shock as more and more readers become desensitized to them. One survey of millennials and Gen Z’ers found that 56 percent had seen Nazi symbols on their social media platforms and/or in their communities. Far from being extreme, they are now widespread.

Dumber. Less and less of the world’s population even knows what these analogies refer to. According to a survey in America, 63 percent of millennials and Gen Z’ers did not know that six million Jews were murdered in the Holocaust and more than half thought the toll was under two million. Twenty-three percent believed the Holocaust was a myth or had been exaggerated or at least they weren’t sure. Twelve percent hadn’t even heard of the Holocaust or couldn’t remember if they’d ever heard of it.

Can’t We All Just Call Each Other Wrong?

We have to discuss political issues and we have to discuss our political opponents. We also have to mine history for its lessons. But English is full of words and history is full of examples. Leave the Nazi analogies alone for now. Unless your only purpose is to stir up ill will, they aren’t going to help make anything clearer or anyone more persuasive, or persuaded.