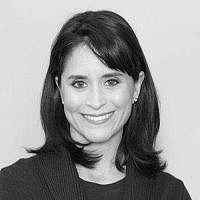 The Blogs
Yael Lerman
Apply for a Blog
Please note that the posts on The Blogs are contributed by third parties. The opinions, facts and any media content in them are presented solely by the authors, and neither The Times of Israel nor its partners assume any responsibility for them. Please contact us in case of abuse. In case of abuse,
Report this post.

Earlier this week, when Electronic Intifada attacked StandWithUs in general and me personally, this indicated that the pro-Israel community is doing something right. The article incredulously highlighted StandWithUs’ recent request to Minneapolis prosecutors that anti-Israel agitators responsible for an illegal disruption of a pro-Israel event be brought to justice.

Memo to anti-Israel disruptors: an event’s audience or attendees have a constitutional right to hear a speaker. A speaker has a constitutional right to speak. These rights are not superseded by your right to disrupt. Disruptions are a violation of a fundamental right to learn, to engage in dialogue and to come together as a community. If you choose to disrupt in a way that is illegal, you can and likely will be arrested. You likely will have to do community service. Moreover, you probably will also have to pay a fine. And the sentence will go on your record for some period of time. At StandWithUs, we honor your right to have diverse viewpoints and make your voices heard when done legally and with the same respect you wish to receive. Otherwise, you will be held accountable for your actions when your extremist anti-Israel and anti-Jewish hate go from being morally reprehensible to legally punishable.

Anti-Israel demonstrators often break campus policies, state laws, and federally-protected rights. It is time for universities and others to work together to stop the disruptions proactively before they occur and fight back when they occur illegally. At StandWithUs, we already have begun to do so and are heartened by our successes.

StandWithUs first learned of the power of evidence and prosecution in February 2010, at UC Irvine, when then Israeli Ambassador Michael Oren was invited to speak. As Ambassador Oren began his presentation, anti-Israel disruptors succeeded in disrupting him intermittently for 45 minutes. The protesters purposely situated themselves throughout the room to make it appear unplanned as they disrupted the speech from various locations. They screamed at Ambassador Oren while other students within their group clapped raucously, and cheered each other on as police escorted disruptors from the room. Once they all finally left the room in a choreographed march, the disruptors proudly lauded their ability to disrupt the event successfully. The ring leader boasted, “We managed to shut them down!” What they did not know was that StandWithUs captured it all on video. After turning the evidence over to prosecutors, eleven of the disruptors were tried for violating California state law—disrupting a public event and conspiracy to disrupt. Ten of the eleven protesters were convicted; the UC Irvine Muslim Student Union faced a six month probation. From this experience, StandWithUs learned the importance of recording evidence of illegal disruptions. We also realized that violators of the law must be held accountable for their illegal and unjust actions just as much as perpetrators of any other crime.

Accordingly, when StandWithUs established a Legal Department a year ago to empower students, faculty and community members and to provide legal resources to fight anti-Israel activity, we prioritized combating public disruptions of pro-Israel events.

Among our first actions was creating a model policy for preventing disruption of pro-Israel events on campus. Our recommendation it to read a prepared script to the audience at the start of the event, advising them of the relevant state law regarding disruptions, and noting that they will run the risk of arrest if they illegally disrupt the event.

Next, StandWithUs trained speakers coming from Israel on their rights under the law and how to protect those rights. Under the U.S. constitution, First Amendment rights include a speaker’s right to speak and a listener’s right to listen. Most states have laws making it illegal to disrupt a public meeting in some capacity. Similarly, most states have laws against trespass, which includes an attendee’s refusal to leave an event when asked to do so by a public official. Many campuses have policies against harassment of speakers and students trying to participate at campus events, among other safeguards. Together, these federal, state, and campus laws are available to protect speakers and events from disruptions. It is up to us to utilize these laws and remind local prosecutors to hold perpetrators accountable for violations of the law.

In November 2015, when the University of Minnesota Law School invited renowned Israeli Professor and ethicist Moshe Halbertal to speak, three community members allegedly disrupted his speech and were subsequently arrested. StandWithUs reached out to the prosecutor providing video footage of the event, suggesting names of students courageous enough to speak about what they had witnessed, and reminding the prosecution of the importance of holding these perpetrators accountable. Throughout this process, anti-Israel groups placed tremendous pressure on the Minneapolis District Attorney’s Office to drop all charges. In the end, two of the three individuals arrested settled for time served, community service and a monetary fine; the last alleged perpetrator awaits his trial.

This past week saw a different example—of how proactive preparations can prevent illegal disruptions. StandWithUs, working together with students, arranged for Israeli reservists to speak at the University of South Florida in Tampa. StandWithUs anticipated that anti-Israel advocates would disrupt the event because disruptors unsuccessfully tried to pass divestment just a few weeks before. We analyzed what tactics the local Students for Justice in Palestine (SJP) would likely employ and discussed how best to handle the situation:

As expected, around 25 SJP members attended the event and walked out. But the Israeli reservists and audience were prepared. The reservists spoke to an audience filled with supporters who wanted to engage in dialogue. At the end, they received a standing ovation because the students appreciated the soldiers’ role modeling, their positivity, and their composure against SJP’s theatrical bullying tactics. Had SJP’s conduct risen to illegal behavior, StandWithUs was prepared.

Anti-Israel advocates may have gotten away with their disruptive and hateful activity in the past, but the pro-Israel camp is stronger and smarter. These demonstrators need to understand that the law is not in their favor and they will be held accountable for illegal activity. Disruptors should be made to feel ashamed and brought to justice for actions that are often anti-Jewish, definitely anti-Israel, and always an affront to progressive values of free speech, being open to dialogue, and the free exchange of ideas.

About the Author
Yael Lerman is the Director of the StandWithUs Saidoff Legal Department, the legal arm of StandWithUs, an international Israel education non-profit organization. Before joining StandWithUs, Yael was a lawyer at the Anti-Defamation League, advised on effective policing at the Police Assessment Resource Center, and litigated at Boies, Schiller and Flexner in New York.
Related Topics
Related Posts
Comments