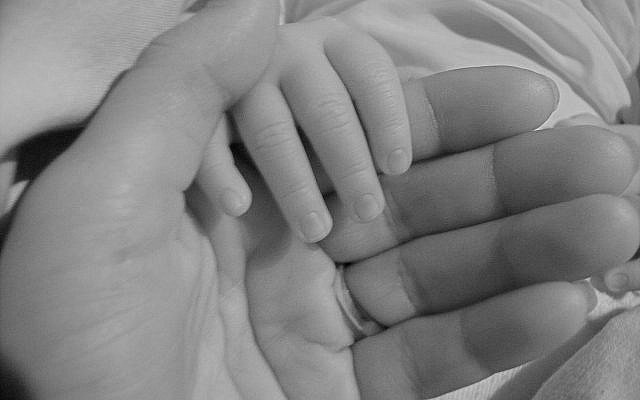 On the day of my first born’s birth, I held my little baby in my arms as he held on to my skin. I whispered in his ear “Hello little buddy, thanks for making me a mommy,” and kissed his bald head.

In his fifth month, he surprised us all as he held on to the side of the sofa and stood. He shrieked with glee as I ran for the camera.

At 1, he held on to the cabinet and somehow climbed into the sink, an activity that he would relish for months to come.

At 2, he held on to his brother’s hand, teaching him about the world and giving him kisses on his bald head.

By 3, he held on to his first bike, disappearing down the street as we ran behind.

When he was 4, he gripped an Israeli flag as he descended from the plane to his new home in Israel.

By 5, he had shed his American accent and held on to, and started to roll, his “Rs” in Hebrew.

At 6, he held on to the bus railing, waving goodbye each morning as he headed to another town for school.

At 7, 8, 9 and 10 he held on to his education, to his growing number of friends, to his blossoming life in Israel, in Neve Daniel, in our home and in our lives as the oldest brother of many; as the one holding the hand of those bald babies, his brothers.

At 13, he held on to the torch, as he was honored in Neve Daniel with the lighting of one of the Yom Haatzmaut flames on the day he became a bar mitzvah.

Reaching 14, he grabbed his hiking shoes and his backpack to head in a new direction at Sussya Yeshiva High School and to a world of new experiences.

And by 15, he was holding on to the side of mountains and repelling with his friends, exploring the Golan, Eilat and everything in between.

At 18, with a new driver’s license and a teudah bagrut, he held his passports in his hands as he explored long and hard beyond the confines of his life: skiing in Bulgaria; learning about his roots in Ukraine, Poland and Prague; and trekking in the mountains of Romania.

And now, today, he will hold on to his Gemara as he starts a new life in Eilat. He’s heading to Yeshiva to learn, grow and develop.

Soon enough, he will be holding a gun in his hand, protecting his people and his Nation for three years… or more.

As he moves into these new stages of life, it is almost impossible to believe that the newborn, the sink climber, the bike rider and the hiker are also this new, almost-grown man. We hope and pray that he holds fast to the lessons learned at home, at school and in the community and that he feels the love given through the years and the strength offered. We hope and pray that he knows how loved he is by his family, his people and his country; and that he will hold these truths close to his heart as he sets out on his own path, his own journey and his own future.