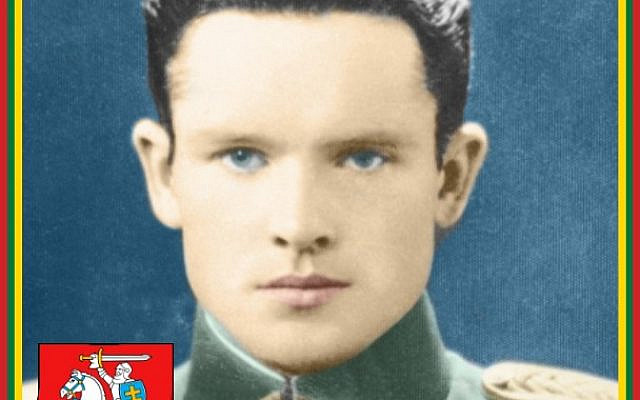 Lithuania’s most (in)famous hero is Jonas Noreika, a mass murderer of Jews. He is still hero-worshipped by Lithuanians for no factual reason. Facts do not matter. Lithuania is a country that desperately needed to rally their gullible population, and so they manufactured heroes. Facts have an ugly way of surfacing, in spite of herculean efforts of that most slick propaganda machine – the Government and Courts of Lithuania.

Lithuania is currently exerting monumental efforts to export its own false historical narrative, particularly into Europe and America.

“Victims of Communism” according to Lithuania (including children who are too young to remember and to the elderly who experienced the crimes of Communism) include Holocaust perpetrators convicted by the Soviets. Lithuania continues to face ongoing and deserved criticism of its narrative. One of the worst falsehoods is in the pervasive and deliberate hagiographic revision turning murderers of Jews into heroes.

One of the most pervasive stories about the victims of Communism centers on the Tuskulėnai Memorial Park in Vilnius. It is a national museum and memorial complex.

From 1944 to 1947, 767 Lithuanians were condemned to death by occupying Soviet courts and were buried here (including the corpse of Noreika). The museum says, the majority were convicted and executed under Article 58 of the Criminal Code of the Russian Soviet Federative Socialist Republic. This would be true except that the article wording was very broad. It contained 18 subsections with sentences for all sorts of perceived anti-Soviet activities.

In presenting these “Victims of Communism“ the museum says: “Some of those murdered were accused of cooperating with the Nazis, participating in the Holocaust and of committing crimes against civilians.” What becomes immediately apparent, is that the museum (as a representative of the Lithuanian Government) is trying to avoid admitting all of those killed were convicted, and a portion of the “accused” were never rehabilitated. No absolute numbers are provided.

Reading through the list of victims, it can be seen that those convicted under orders issued by the Presidium of the Supreme Soviet of the Soviet Union on April 19, 1943, and on May 24, 1945, entitled “On Measures for Punishing the German Fascist Evil-Doers.” comes to One hundred and thirty six people convicted of Holocaust crimes. Some of them are known as brutal mass murderers, for example, Elizabeta Zeling who was in charge of a concentration camp, and Emil Just, the Wehrmacht’s military commander for the Generalbezirk Litauen under Nazi occupied Ostland. When Holocaust perpetrators are recognized as “victims of the Soviets” the question arises as to how the Lithuanian Republic views the people convicted at the Nuremberg trials? As hero victims?

Seventy-seven Lithuanian security police officers are buried at Tuskulėnai, with the second largest number of corpses resulting from convictions of being members of other “organs of repression”. Among them were Holocaust perpetrators, convicted under article 58 of the Criminal Code of the USSR. This included members of the Vilnius Ypatingasis būrys [Vilnius Special Unit]: J. Kazlauskas-Oželis, J. Mačys, V. Mandeika, J. Narkevičius, S. Ukrinas, P. Vaitulionis and B. Želvys; and murderers from Kaunas who slaughtered Jews.

There were also plenty of eager murderers from the countryside. For example, J. Arlauskas, K. Idzelevičius and K. Šulcas, convicted of complicity in the mass homicide of the Jews of Telšiai, and F. Švėgžda, K. Žulpa and J. Žulpa, who murdered the Jews of Šeduva. Some of them achieved evil renown after the war, for example, J. Neicelis who was tried for murdering the Righteous Gentile forester Mykolas Šimelis who rescued Jews from the Holocaust (A miniscule 0.04% of Lithuanians were recognized as Righteous Gentiles by Yad Vashem).

There are also reportedly the remains of 257 Holocaust perpetrators buried at Tuskulėnai.

The museum needs to present the facts of how the Nazi murderers were discovered, arrested and punished. The Center for the Study of the Genocide and Resistance of Residents of Lithuania (Genocide Center), however, never collected these facts for public presentation, opting instead for the opaque, mendacious narrative of “the Victims of Communism.”

The most remarkable illustration is the wall of the Lithuanian, Genocide Museum where are inscribed the names of people buried in Tuskulėnai, including recognized Holocaust perpetrators (Perpetrators of genocide are indeed honored in Lithuania’s Genocide Museum). 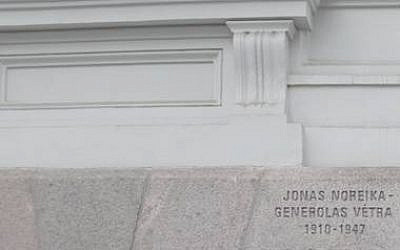 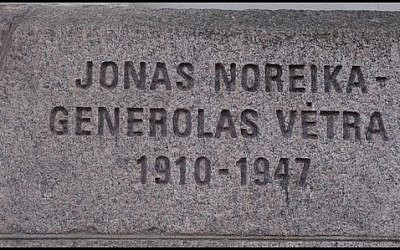 Included are A. Mikuckis who died in prison and was convicted under the first subsection of the aforementioned law. And June Uprising unit members L. Andriuškevičius, N. Griška, V. Nefiodovas and J. Paškevičius who operated in Petrašiūnai in 1941. The Lithuanian archives as well as the first volume of “Masinės žudynės Lietuvoje” [Mass Murders in Lithuania] contain a report from Nefiodovas that his unit caught 50 carts full of Jews trying to flee and turned them over to the Kaunas Kommandatura (for murder). There are also those who massacred civilians in the post-war period.

Lithuania’s official Government department tasked with rewriting Holocaust history, and turning it into a national fraud, the Genocide Center, admits to a lack of transparency, saying that over a dozen of the names inscribed on the memorial wall should not be there., Of course there have been no changes made; words from the Lithuanian government are usually worthless.

The list of selected names was compiled under the direction of (current Lithuanian Defense Minister) Arvydas Anušauskas, who was the administered the Genocide Center. This is one in a series of works by Anušauskas that casts doubt on his “competence” as an historian. He is a known Holocaust revisionist and celebrated antisemite.

Anusauskas was also the “academic editor” in V. Ašmenskas’s book lionizing Jonas Noreika and denying his crimes. Anušauskas and Lithuania continue to lack the political and moral will to correct or even admit to their grotesque manipulations of historical memory policy and Holocaust inversion.

Announcements of Lithuania’s efforts to spread its own narrative of “the victims of Communism” throughout the world are murky, jumbled and ludicrous.

Lithuania has never come up with an honest and complete narrative or explanation of their Holocaust criminals and collaborators, their apprehension and their prosecution. Lithuania has not punished even one single person for Holocaust crimes in which approximately 220,000 Jews were murdered on their territory. Instead, the government “mass-rehabilitated” those convicted under article 58. There were no new hearings on the crimes committed in those cases, just a proclamation that everyone convicted under that article is now innocent.

In addition, the Lithuanian Government falsely declared that the United States Congress rehabilitated and “completely exonerated” another of their Holocaust perpetrators, a completely false statement. US Congressional demands for a retraction of these falsifications have been met with Lithuanian government silence.

The lack of integrity in that mass rehabilitation was later demonstrated by decisions to revoke rehabilitation for 170 people. There are still many questionable cases which the government refuses to address.

Lithuania does not have an honest narrative of the Nazi occupation. The story of the beginning of the Nazi occupation is clouded and occluded by a mythologized and heroized narrative about the June Uprising of 1941. There are even problems with the chronology, since there is a refusal to admit the Nazi occupation of Lithuania began in the spring of 1939 when Memel/Klaipėda was annexed to the Third Reich. Admitting that would put the lie to the popular story which says the pro-Nazi attitude of the June Uprising insurgents was justified by the prior Soviet occupation and repressions. Nonetheless, it’s clear the pogroms directed against both Jews and Lithuanians in 1939 occurred before the Soviet occupation in 1940. Without forgetting those pogroms nor the Lithuanians whom the Nazis later imprisoned after the onset of World War II for the crime of listening to the Kaunas radio station, it is nonetheless very difficult to call the aid the June Uprising insurgents rendered to the Nazis in 1941 in occupying all of Lithuania “patriotic.”

Most of Lithuania’s “June Uprising” was just Lithuanians shooting fleeing Russian soldiers in the back, as they ran away before Nazis arrived.

Historical truth has a hard road to follow in Lithuania following decades of lies and propaganda. For instance, Silvia Foti’s book “Storm in the Land of Rain”, a moving personal story about her search for truth and how she came to learn her grandfather Jonas Noreika–“General Storm”–was a Holocaust perpetrator, hasn’t met with much favor.

Lithuania, unwilling to put its own house in order, now seeks to export its false, distortion of Holocaust history into USA. Propagandizing that Jonas Noreika and his compatriots were “Victims of Communism”, rather than the monsters they actually were — a total inversion of truth.

Within Lithuanian academia, there is no remaining facade that the Government‘s „Genocide Center“ is anything other than a Orwellian propaganda unit tasking with historical fraud. Genocide Center „historians“ have admitted as much. Historians from legitimate entities such as Vilnius University, Vytautas Magnus University, Klaipėda University and the Lithuanian History Institute have protested the historical fictions published by this government unit, and some have terminated any cooperation. The Government of Lithuania had no option but to change leadership of their fraud department, but no fraudulent findings have been retracted.

The Government of Lithunia is now submitting their lies into the American education system, in this case, the Victims of Communism Museum. Eighty years of Holocaust education in America is now being destroyed. When mass genocidal murderers such as Jonas Noreika are held up as “Victim of Communism”, Americans and all decent people should rise in protest.

The Lithuanian Genocide Center must be closed.

All their findings must be revoked.

The government of Lithuania needs to issue the world a national apology. Otherwise, history will repeat. The world cannot withstand another Holocaust.

The above was coauthored by Evaldas Balčiūnas.