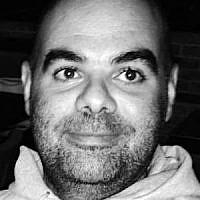 The Blogs
Ariel Lekaditis
Apply for a Blog
Advertisement
Please note that the posts on The Blogs are contributed by third parties. The opinions, facts and any media content in them are presented solely by the authors, and neither The Times of Israel nor its partners assume any responsibility for them. Please contact us in case of abuse. In case of abuse,
Report this post.

We will analyze the perceptions, interpretations, perspectives, criticism and input of guest Weiss Livnat. It was the first time, I met a survivor from the Nazi death camps, now living in the State of Israel. Of course, it was not my first encounter with a Jewish survivor, for I met a few near-martyrs in Greece. My curiosity peeked because this survivor had a double identity; one as member of a group surviving the extermination camp, then, as the individual making possible my own presentation at Israel’s Haifa University.

His narrative, at first blush is not much different from other survivors — the old adage holds: each survivor prevailed, that is the common thread holding the stories; but every one did so differently. The uniqueness of my interlocutor is in having him stand erect before me, despite that his age. His strength was acquired from his retelling his story, weaving it in a grand tapestry as part of the whole that is the Holocaust period.

Along with one other survivor, he was a vivid witness of the Nazi camps of extermination, easily emitting the perception of his suffering as in the days of old, the assaults of Cossacks in pogroms against the Jews. His pride in being Jewish was quite self-evident, even as he was agitated and disappointed in the attitudes and actions of Christians during the Second World War.

In common with the reaction of some survivors, to put distance between the past and the present in order to secure a positive future, the man in front of me changed his name, and began a new life in a new venue, more Jew-friendly, Israel. Most dramatic to my classmates and me was his direct statement that I don’t believe in G-d, I envy people who do,” jolting my equilibrium.

Repeatedly, he was at a loss to answer the “why” for the Nazis beastly conduct, at the same time emphatically believing his duty to future generations to inform them of the depth of depravity that exists within man, the need to transmit witness accounts, but also the qualitative characteristics that are available to us all to hone: education, morality, tolerance, compassion, empathy, eventually materializing as a modicum of affection.

Films on Holocaust themes are not fully satisfactory, for some find difficult the transference of the self into the hell that was life waiting for death, the capricious nature of daily life in the various death camps (see the arbitrary taking of life in Schindler’s List). More, existential questions remain to wreck havoc with our seemingly placid lives: would any of us rise to the challenge to neither be perpetrator or bystander, if faced with a similar challenge? Would we resist, knowing that death beckoned upon discovery?

Fortunately, we do not have to face this reality. For this reason, it is difficult to evaluate and judge the reaction of survivors while being tested with life’s alternatives as they were living it in the camps. Nor can one escape calculating the proposition that many Jewish lives would have been saved, had there been a State of Israel, or that a more welcoming world community, including the arsenal of democracy, America, had been more forthcoming in granting visas, many, many visas to the condemned Jews living in Germany and other European countries that the Axis powers would eventually swallow.