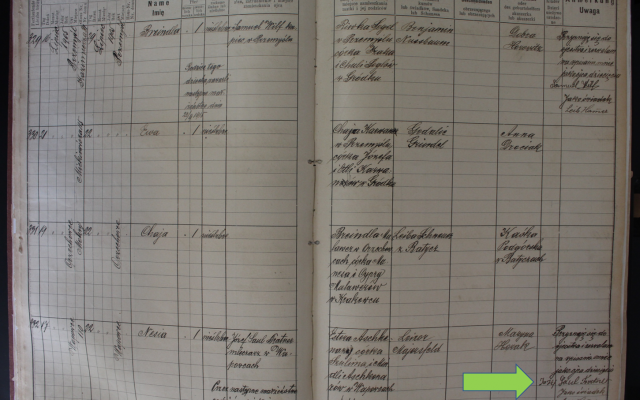 During a recent trip to Poland, I was able to find the only physical evidence that my grandmother's family ever existed: a Town Hall record of her birth: next to the flowery calligraphy of the Polish clerk, in the correct column, here's my great-grandfather’s scribbled, shaky signature. {own photo}

My maternal grandmother was born in Poland; but, as a young woman, her parents sent her to Romania, to take care of a sick relative.  She got married there and stayed.  I am the random outcome of that casual fact; because that’s how she survived, while her entire family (her two parents, her six siblings, God only knows how many aunts, uncles, cousins, nephews and nieces) disappeared.

They lived in Przemyśl, then a small Polish town bisected by the river San.  On 15 September 1939, the town was occupied by the Wehrmacht; between 16 and 19 September, they rounded up and shot 600 Jews.  Then the Germans withdrew across the river, so that the eastern half of the town could be occupied by the Red Army – as per the Hitler–Stalin Pact (a.k.a. the Treaty of Non-aggression between Nazi Germany and the Union of Soviet Socialist Republics).  In the Soviet half of the town, the Jews fared only marginally better: some were shot by the NKVD; thousands were deported to unknown destinations somewhere in the USSR – few were ever seen again; the remainder were killed by the Germans, after they re-occupied the eastern half of the town in 1941. 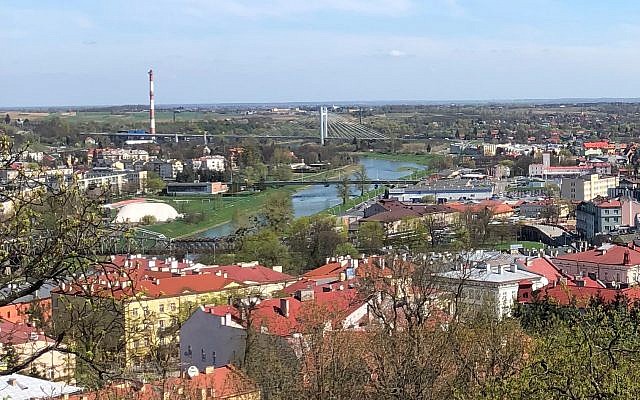 The river San flows through Przemyśl. In September 1939, it became the border between German- and Soviet occupied Poland. {own photo}

As for my grandmother’s family, I carry many of their genes, but little of their story.  Nobody knows when they died; or how they died: whether at the hands of the Germans, of the Soviets, of Polish or Ukrainian collaborators; perhaps they succumbed to starvation, thirst, cold, disease or just to depression and despair.  I know nothing about their death and very little about their life.  That’s why I said that they didn’t just die – they disappeared.  The dead are memories in the souls of the living; all I have is broken branches on a family tree.

And yet, I took no part in the Holocaust Memorial Day.  As a proud Jew, this ‘Memorial Day’ offends me.

The very name ‘Holocaust’ adds insult to injury.  Contrary to popular belief, it is not an English word – it’s Greek.  The Greek translation of the Biblical term ‘burnt offering’, which refers to an animal being sacrificed and then burnt in the Temple as homage to God.  My poor relatives might have been burned, yes; but they were no animals.

Why on earth have we taken to calling our pain by an utterly inappropriate Greek name?  It already has a name: it is  השואה— the Sho’ah.  It is a fitting name, because it’s in Hebrew, not Greek: the language of the prayers that my relatives may have uttered before being murdered (not sacrificed!).  It is a fitting name because it has nothing to do with ‘sacrifice’: it means ‘catastrophe’ or ‘calamity’; it’s what one calls a disaster of unbearable proportions.

We stupidly, bovinely accept the offensive term ‘Holocaust’, just as we once accepted ‘antisemitism’ – a term invented by a Jew-hater intent on putting a ‘scientific’ patina on a base instinct.

The Sho’ah ended in 1945; but there was no ‘Holocaust Memorial Day’ until 1996, when the Germans (yes, the Germans!) decided to proclaim a Day of Remembrance for the Victims of National Socialism (Gedenktag für die Opfer des Nationalsozialismus); 5 years later, it was adopted by the United Kingdom under the current name.

But, just like our pain already had a name, it already had a Memorial Day: Yom HaSho’ah, marked by Jews in Israel and in the Diaspora since 1949!

And I resent the ‘symbolic’ date: 27 January, a date meant to suggest ‘liberation’ or ‘salvation’ of Jews, rather than their mass extermination by Germans, with the extensive (and occasionally enthusiastic) collaboration by members of practically every European nation.

27 January 1945 was the date on which the Red Army ‘liberated’ Auschwitz.  Liberated?  The German troops had already fled by then; most of the prisoners had been marched off – many to their death; the few emaciated, tortured human husks that still inhabited the camp had been left to their own devices, not out of belated compassion or remorse, but simply because the Nazi death industry was running out of ‘production capacity’.

Sorry to rain on that touching ‘liberation’ parade.  The Red Army ‘liberated’ Auschwitz not because – between September 1939 and January 1945 – it had developed a sudden interest in saving Jews; its aim was to punish those who invaded the Russian soil in 1941 – but also to create a new political reality in Eastern Europe.

But why January 1945?  Why Auschwitz?  The Soviet Army had already encountered death camps during the previous months: on 22 July 1944, for instance, the Red Army had captured Majdanek near Lublin.  Abandoned in panic by the German guards, Majdanek was captured intact – lock, stock and gas chambers.  The extent of the crimes committed was immediately clear: there were survivors, exhumations – there was even an official inquiry report published within weeks. 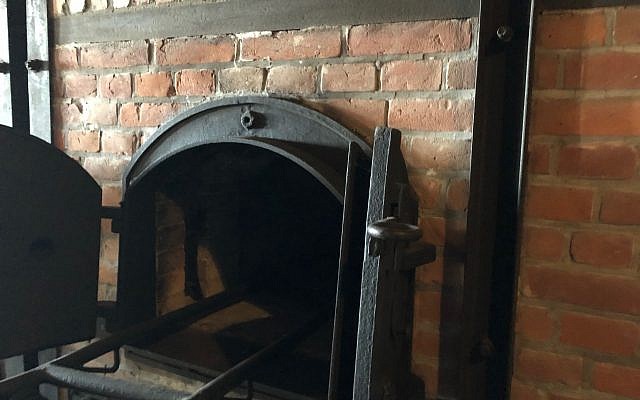 Crematorium at Majdanek. {own photo}

By the end of July 1944, the Red Army – in full offensive and facing increasingly crumbling Wehrmacht units – had reached the outskirts of Warsaw.  In Southern Poland, the frontline passed close to the city of Rzeszow, just 150 miles east of Auschwitz.  But then – suddenly, surprisingly – the Soviet offensive stopped in its tracks; the Red Army remained relatively passive for months, before resuming its advance in January 1945.  Why?  Because on 1 August 1944, the Polish underground Home Army (Armia Krajowa) launched an insurrection against the German occupation.  With weapons largely stolen or captured from the Germans, the Poles embarked on the symbolic act of liberating themselves – while expecting the Red Army to take advantage and advance.  As it happened, the Polish partisans  managed to take control of most of Warsaw, as well as of Rzeszow (on 2 August) and a few other parts of the country.  But Armia Krajowa was loyal to the Polish government in exile, which resided in London and was pro-Western.  Stalin had other plans for Poland.  Opened up for research in the 1990s, the Soviet Archives include Stalin orders halting the Red Army offensive and forbidding it from delivering any assistance to the Polish uprising.

That is the real story behind 27 January 1945: but for Stalin’s ‘overriding’ political considerations, there is little doubt that Auschwitz would have been liberated in August 1944.  Tens of thousands of Jews would have been counted among the survivors.  Unlike in the case of Majdanek, at Auschwitz the SS had time: time to dismantle crematoria and hide evidence; time to ‘liquidate’ many of the prisoners and time to march away others, into the deadly January cold.

But let’s not pick on the Soviets; there’s plenty of guilt to go around.  There’s hardly a nation in Europe and the Americas that did not contribute – directly or indirectly – to the murder of six million Jews.  Some murdered them with their own hands, others ‘just’ handed them to the Nazis; some closed their borders, others their hearts; some sought ‘diplomatic solutions’ with mass murderers, others deemed ‘a few Jews’ a price worth paying for ‘world peace’.

Few had any interest in ‘liberating’ or saving Jews – and nobody wanted to go to war for them.

Even after the magnitude of the horror became officially known, few managed to muster more than nominal compassion for the survivors.  ‘Recognising’ that most of the surviving Jews ‘could not be reintegrated’ in Europe, the British government was planning to ship them to South America.  Excerpts from a 31 July 1946 contribution to a House of Commons debate, by British Deputy Prime Minister Herbert Morisson:

[B]y assisting to reestablish political and economic stability in Europe, we should continue to contribute to the restoration of those basic conditions which will make possible the reintegration in Europe of a substantial number of displaced persons, including Jews. […]

But, when all that is possible has been done in Europe, it is clear that new homes must be found overseas for many whose ties with their former communities have been irreparably broken.  […]

Plans are in preparation, in cooperation with the nations concerned, for resettling large numbers of displaced persons in Brazil and other South American countries.

But those days are gone.  And why wouldn’t they?  It’s all in the past.  Auschwitz is but a museum; the hundreds of thousands of survivors are no longer wondering across Europe; most are no longer around – and nor are the perpetrators; and so the few remaining survivors – the children of Auschwitz, now old and decrepit – can safely be celebrated as “victims of National Socialism”.

‘We’ are oh-so progressive now; so liberal; so determinedly anti-fascist in a world with so few overt fascists.  We are the good guys; so let’s commemorate the ‘Holocaust’, folks!  Or better still, ‘the Holocausts’.

So what if two thirds of Brits do not know how many Jews were killed in ‘the Holocaust’?  So what if 1 in 20 believes there hasn’t been a ‘Holocaust’ at all?  If 1 in 10 believes that “Jews exploit Holocaust victimhood for their own purposes”?  Sure, sure, we need to deal with this ignorance – education and all that jazz.

But the important, the really important and urgent thing is not to remember just the Jews – there were others who suffered.  What about the Rwandans?  The Cambodians?  The Armenians?  The Bosnians?  Most importantly, what about… what about THE PALESTINIANS??? 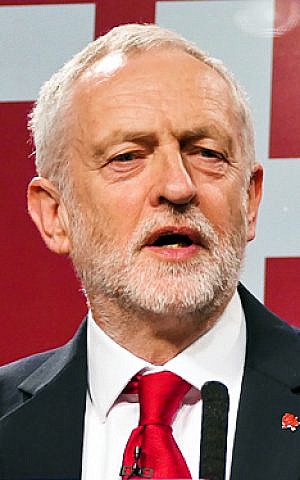 What about the trans-Atlantic slave trade?  What about colonialism, imperialism, racism – what about capitalist exploitation??  No, no, we cannot possibly have a Memorial Day for just one Holocaust; especially not for the Jews – who are, let’s face it – when all is said and done, white privileged persons.  No, we’re going to have a Holocausts Memorial Day, a Genocides Memorial Day; or better day a Human Suffering Memorial Day.  A day in which we remember all those who suffered – throughout history and in all places; a Super Universal & Über-Politically Correct Day for Remembering Everything & Everybody Who Ever Suffered on Earth & Throughout the Universe! 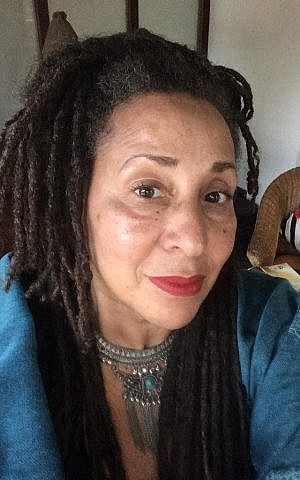 Labour Party activist Jackie Walker (now suspended) claims that Jews are privileged in “a hierarchy of race” and that the Holocaust Memorial Day ignores “other genocides”. {public domain photo}

Did I say I was a proud Jew?  That was soooo racist of me!  What I am is a proud human being… err… I mean a progressive inhabitant of the Universe, whether human or otherwise, it doesn’t matter now does it??

I am a so ashamed, please, please forgive my former caveman… err… caveperson mentality!  I abjure, I abjure…  I abjure everything.  My racist tendency to mourn my relatives, rather than all  relatives!  My neo-con reluctance to celebrate the liberation story; my right-wing propensity to burden the world with guilt for just one Holocaust…  I abjure my rootless cosmopolitanism, my dangerous nationalism; my bolshevism and my capitalism; my cowardice, my militarism; I abjure everything.

But please, I beg you: could you find it in your oh-so generous, universalist hearts to forgive me for that particular pain I’m still feeling?