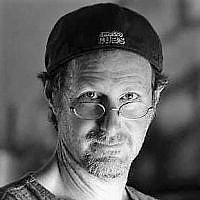 The Blogs
Andy Alpern
Apply for a Blog
Please note that the posts on The Blogs are contributed by third parties. The opinions, facts and any media content in them are presented solely by the authors, and neither The Times of Israel nor its partners assume any responsibility for them. Please contact us in case of abuse. In case of abuse,
Report this post.

Imagine, for a moment, two extremely improbable and rare events — the Chicago Cubs winning the World Series and simultaneously being in Israel and Wrigley Field. In what seemed to be a redemptive moment in history, both these events took place in October 2016. The first one, you’ve probably heard about, but the second took place in my sukkah in Tzfat in Northern Israel.

I, however, live in Israel, and have for about 20 years now.

But I grew up in the Chicago suburbs — worshiping the Cubs, and praying for them to finally make it to the World Series. So when the Cubs made the playoffs last year, I was pretty excited!

When it became clear that I couldn’t attend the Playoffs in person, I opted for the virtual option — to print it up as a sukkah wall! I’m pretty sure it’s the only baseball field sukkah in the world!

Years ago, I had taken my nephew to a game and shot a panorama at Wrigley Field.  I had to dig around a bit in my archive, but baruch haShem, I found it!  So not only do I have a Wrigley Field Panoramic Sukkah, but my whole family gets a kick out of the Easter Island-sized 7-year-old-Noah-head in the corner (He’s 24 today — full grown and sporting a beard!)

My son and nephew in the Wrigley Sukkah

No Etrogim were harmed during this photo shoot!

During the historic 1984 playoffs (the first the Cubs had made since 1945), I worked at Wrigley Field as a vendor. Keeping up tradition, I served a lot of beer, peanuts, and hot dogs to my Sukkot guests.

My big boys and I slept in the sukkah, and would wake up in the middle of the night to watch the games. They seemed to do better when we were watching, so it was a big responsibility! The last playoff game took place during Shmini Atzeret, so we had to wait until motzei chag to learn that the Cubs would be going on to the World Series!

Watching the World Series in the Wrigley Field Sukkah

Taking inspiration from Choni haMe’agel, a local first century BCE sage, famous for drawing a circle on the ground during a severe drought and refusing to step out of it until haShem sent rains, I decided to leave the Wrigley Field Sukkah set up until the Cubs won the World Series.

While I didn’t refuse to leave my sukkah, we did continue to watch the games in there. It was seven-game series, and starting to get cold up here in the Galilee mountains, but our faith was strong, and we stayed in our Wrigley Field Sukkah cheering the Cubs to their historic bottom-of-the-tenth victory!”

Sukkot begins tonight, and the Cubs play their first playoff game against the Washington Nationals on Saturday at 2:30 a.m. Israel time — so we plan to watch the game on Saturday night! I’m looking forward to serving beer, cheering the Cubs through another World Series, and figuring out how to explain my kids’ school lateness to their Israeli teachers.

Me and Da Boyz with the MLB World Series Trophy!

The Panoramic Sukkah can be seen online at PanoramicSukkah.com and more of Alpern’s work at Tziloom.com.

About the Author
Andy Alpern is a Chicago-born Israeli artist living and working in Tzfat. Specializing in 360-degree panoramic images of Israel, Andy’s work offers a unique perspective on Israel – one not normally available to the human eye. His photographs take in the full range of action and life in a scene, creating illusions of shape, line, and imagery. Beyond photography, Andy's interests include travel, food, markets, the Chicago Cubs, Kabbalah, music, art, consciousness expansion, nature, and craft beer. Check out his work at Tziloom.com.
Related Topics
Related Posts
Comments
Advertisement