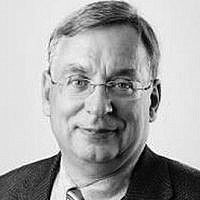 The Blogs
Andrew Dismore
Apply for a Blog
Please note that the posts on The Blogs are contributed by third parties. The opinions, facts and any media content in them are presented solely by the authors, and neither The Times of Israel nor its partners assume any responsibility for them. Please contact us in case of abuse. In case of abuse,
Report this post.

Having spent over a decade campaigning, alongside many others, for the complete proscription of Hezbollah, both when I was MP and now as Assembly Member, I am pleased that at least City Hall – both the Assembly and the Mayor- now agree that Hezbollah should be fully proscribed.

At Thursday’s London Assembly plenary, the Al Quds march and Hezbollah came up twice. Firstly, when I asked London Mayor Sadiq Khan to raise it with the Home Secretary; and secondly, in a motion passed unanimously , after my amendment to it was approved.

The Assembly was clear that we must defend the right to freedom of speech and of association, and that there can be no objection to legitimate and proportionate criticism of Israel: however, this was not the case with the Al Quds march which provided an opportunity for anti-Semitic organisations to publicise themselves. The police have been unable to prevent the display of material, like Hezbollah flags, that aims to recruit for terrorist organisations, because the so called ‘political’ wing of Hezbollah is not proscribed as a terrorist organisation.

The Assembly has now agreed that the distinction made between the ‘political’ and ‘military’ wings of Hezbollah is utterly bogus: indeed Hezbollah’s own statements have made clear they see no distinction themselves. Surely, if there was difference , then ‘political’ Hezbollah should display flags with a ballot box not a Kalashnikov?

Given Sadiq’s excellent   record opposing anti-Semitism, he fully acknowledged the community’s concerns when I asked him about the march. He shares the concerns of London’s Jewish community about the support shown for Hezbollah, which he has described as an illegal, proscribed and anti-Semitic organisation, at the annual Al Quds Day march.

After agreeing to my proposition that neighbourhood policing is a key part of the ‘golden thread’ in the collection of intelligence about, and the fight against, terrorism, I put to the Mayor that I represent the largest Jewish community in the country, and having campaigned for the complete proscription of Hezbollah, the distinction between its so called ‘political’ and ‘military’ wings was non existent.

I asked Sadiq to agree that terrorist supporting organisations such as Hezbollah, which we saw on the recent Al Quds march, have no place in our city and asked him, on behalf of my constituents, to make strong and urgent representations to the Home Secretary to make the long overdue decision   to proscribe Hezbollah in its entirety- to ban it , as in so many other countries round the world.

Sadiq agreed to do so, with no hesitation. He remains in contact with the Met. Commissioner about it and Sadiq has confirmed he will be writing to the Home Secretary to make strong representations on behalf of London’s Jewish communities about their legitimate and understandable concerns. He has said he will continue to work with the Met and communities across the capital to do everything in his power to crack down on extremism and ensure London’s Jewish communities feel safe and secure in London..

The Mayor’s extensive work to tackle hatred of all kinds including anti Semitism must now be matched with real action from government. ‎It’s time for the Home Secretary fully to support Londoners and the Mayor in protecting London from the sorts of message promoted by the Al Quds march by fully proscribing Hezbollah.

About the Author
Andrew is Member of the London Assembly for Barnet and Camden, and was the previously the Member of Parliament for Hendon
Related Topics
Related Posts
Comments